Lat night at the restaurant, I was the utility infielder, if you will, doing whatever prep projects I could find and then jumping in to help whoever was getting “in the weeds” as we say. A good deal of my time was spent shucking oysters since Gianni has a hard time doing it. It’s not that I’m a super shucker myself, but I was the one with the time to do it. I found this video clip that shows how it’s done:

Multiply that by about fifty and you get an idea of how my night went. Needless to say, I’m a better shucker than I was when the dinner service began. Practice, in this case, improves both confidence and competency.

But that’s not true of everything.

I’ve spent most of my life moving. I’m fifty years old and I’ve lived in five countries, close to a dozen cities and towns, and have had at least forty different addresses. I am practiced at saying goodbye but, unlike oyster shucking, it has not gotten any easier. In fact, I think it has become more difficult.

This morning, Ginger announced to our church that she is resigning to become the Senior Pastor of Pilgrim United Church of Christ in Durham, North Carolina. It’s goodbye again.

One of the things I love about the UCC is the intentionality to which they call their pastors and parishioners when it comes to parting ways. I grew up in Baptist churches where the preacher stood up one Sunday, resigned with a two-week notice, and was gone before anyone had time to feel much of anything. The UCC suggests somewhere in the neighborhood of a sixty day farewell process, ending with a wonderful liturgy where both pastor and parish give and ask forgiveness; offer words of affection, gratitude, and encouragement; and release one another to what is yet to come. Yes, two months is a long time and the goodbyes are hard and yes, it’s worth it. We have stories to tell, things to do, and – of course – meals to share. What lies ahead in Durham is full of good people and amazing possibilities. At coffee hour, some folks asked me questions about the church there and the town as well. It is a cool church and the move is the right one for us.

But today was the beginning of goodbye, which we must do well both to honor those whom we love here and to open our hearts to those whom we will love in the days ahead. Ginger and I married in April 1990 and moved to Boston in August. For the last seventeen years we have had a Massachusetts address and a zip code that begins with 0. We have been able to listen to Joe Castiglione call the Red Sox games on the radio when we couldn’t see Remdawg on TV or get to Fenway in person. We watched them build the Big Dig from start to finish (well – sort of a finish). Ginger has weathered not only the Boston winters, but my three major career changes and my depression. We found our home in the UCC here in churches in Winchester and in Marshfield. Ginger earned her doctorate and has carved out a significant place in the Mass. Conference of the UCC. We know how to drive in Boston traffic, know what a “regular coffee” is, are both loyal and addicted to Dunkin’ Donuts coffee, regularly use “wicked” as a superlative, can push a mean snow shovel, have laid on the grass along the Charles to hear to Pops play on the Fourth of July, and, week in and week out for the last seven years, worshipped and fellowshipped as members of North Community Church.

As much as I love gospel music, one old hymn that has always bothered me is

because I can’t come to terms with thinking of our lives as nothing more than way stations. All the joy, pain, sorrow, hope, love, and heartbreak are the existential equivalent of a bus station: we’re just waiting for our ride.

No. I’m not here forever, but I’m doing more than passing through.

One conversation I had at coffee hour today was with a woman who is a wonderful artist. She was asking me about my new job (which I get to say goodbye to as well) and I rambled on for a couple of minutes. She then noted she could see my passion for cooking even though she didn’t share it. In the course of her explanation, she said, “I think part of it for me is it’s so temporary. You finish fixing the meal and then it’s gone.”

My culinary art is lucky if it stays intact two or three minutes from the time I put the final garnish on the plate and notify the server. As we talked some more she said, “I guess what endures is you get to create something that lives on in what happens at the meal.”

The table nearest our open kitchen filled up about eight last night and, when I finished cleaning my station at ten-thirty they were still sitting there. The food was long gone, but their conversation and laughter had been the soundtrack for the final hour of my evening. In the course of human history there have been very few days, if any, that resulted in something permanent. All of our art is housed in temporary exhibitions.

What a gift that we have been created to attach to one another, to love one another, even when we know the goodbyes are inevitable. If we were only passing through, it wouldn’t hurt like this. 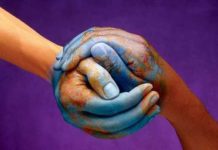