If this can be termed the century of the common man, then soccer, of all sports, is surely his game…. In a world haunted by the hydrogen and napalm bomb, the football field is a place where sanity and hope are still left unmolested.
~Stanley Rous, 1952

I have a confession: for the three weeks Ginger has been gone, I’ve been eating alone.

Other than my periodic trips, my life has been about going to work and then coming home and hanging out with Schnauzers and working on projects around here. I have been somewhat of a hermit, pulling in from most contact with people around me, and trying to figure out what that means in my life right now. Much of my time at home has been spent digging in the dirt, planting both flowers and vegetables, which is therapeutic for me, and trying to clean up the yard as a welcome home present for Ginger. The other consistent activity in my life this past week has been watching the World Cup.

I’m one of the few people I know my age who grew up playing football – uh, excuse me – soccer. More afternoons than not, as a kid, my brother and I got home from school, changed out of our school uniforms, and ran out into the back yard to meet the neighbors for a football match, playing with anything from a ball to a tin can. When we lived in Lusaka, Zambia, the family next door had four boys. A girl lived on the other side of them. Behind each house were servants’ quarters where even more kids lived; it was easy to find enough players for a game: Stephen, John, Michael, Chubbs, Elena, Sampson, Aleti, Sadie, Goristino (he had six toes), Miller, me.

In those days, the player we all wanted to be was “Zoom” Ndhlovu, who was to 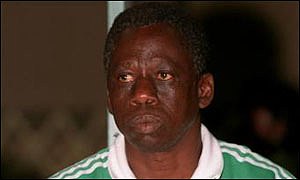 Zambia what Pele was to Brazil. He played club football for the Mufulira Wanderers and I got to see him play several times. When we all got in the backyard, we imagined our feet moving like his, masterfully guiding the ball around opponents and into the goal. The other big name in Zambian football was a commentator called Dennis Liwewe. He is still a significant voice in Zambian sports life. Liwewe’s description of Zoom’s moves were as deft as the play 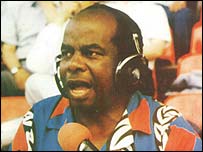 er’s ball handling. So, when we played in the backyard, not only did we have to try and be like Zoom, we had to provide the color commentary as we moved the ball: “Z-o-o-o-o-m-m-m-m!” Day after day of pick-up football games shaped much of my childhood. Some of us played at school, but we knew nothing of little league or any other kind of organized sports. Our repeated play wore out the lawn in our yard, so we played on a dirt field with balled up shirts for goal posts.

I was, however, a part of one Championship Team in my life.

In Lusaka each year, there was a five-a-side soccer tournament among the schools. My fifth grade class at Lusaka International School put a team together. I was the goalie. the tournament was a one day affair, beginning early in the morning and going until a champion was crowned. What I remember of those games was Dickie, our forward, racing down the field to score; Robert, one of the fullbacks who was larger than anyone else on the field, clearing the ball most of the time so I didn’t have to make many saves, and getting the trophy at the end of the day. I held it over my head the way I had seen Zoom do it.

I’ve never been one what has gotten much out of the sports-as-a-metaphor=for –life perspective for two reasons: one, I’m an amazingly average to mediocre athlete and, two, it was my father’s primary metaphor, which often left me feeling less than adequate for whatever might be coming. At the same time, I love playing team sports. I miss the church softball leagues we had in Texas. The afternoons playing soccer were fun because we were all playing together, not because of who won. When I lived in Dallas, I played in a noncompetitive volleyball league where we only kept score so we knew when it was time to quit playing and go for beers. Sports as a metaphor for community is meaningful to me.

I know the guys

playing for their nations in the World Cup are playing for blood. And I love that I get to watch the games and enjoy the sheer beauty of it. Ecuador beat Costa Rica this morning in an amazing display of teamwork, precision, and art. Soccer calls a player to be patient and creative, deliberate and opportunistic, accomplished and grateful. What a wonderful game.

So, in these my hermit days, I’m watching teams – those who don’t play (or eat) alone – demonstrate beautifully the art of being human. My favorite moments in each match are two: one, when whoever scores a goal runs to stand in front of the fans from his country and his teammates join him in exuberant embrace and, two, at the end of the game when the players from the different countries exchange jerseys. For all the emotion and competition, the last word puts us all on

To say that these men paid their shillings to watch twenty-two hirelings kick a ball is merely to say that a violin is wood and catgut, that Hamlet is so much paper and ink.
~J.B. Priestley, The Good Companions, 1928