I have to admit I didn’t know it was a hymn the first time I heard it.

I was in tenth grade, living in Fort Worth, Texas during our year of leave from the mission field (as they used to say) and completely taken with American popular radio. It was the year of “American Pie” and “I’ll Take You There,” and “Morning Has Broken.” By the time I knew it was a hymn, it had also become the wake up music for any number of youth camps, beginning (for me, anyway) with First Baptist Richardson at Camp Ozark when Gene Wilkes and I would do a less than reverent, but nonetheless sacred version to call the young campers out into the day we had planned for them.

Our version broke morning wide open, I must say.

Last Sunday morning, the hymn broke in on me as I sat among our faithful to hear the first of the “Stories of Resurrection” we had been promised on the Sundays from Easter to Pentecost. We’re going off lectionary to look at particular stories both in scripture and in the world around us here in Durham. This week it was the Gospel According to Housing For New Hope, an amazing organization here that reaches out to homeless folks with tenacity and redemption. Three people told their stories and two others sang in between tales, ending with Terry, the founder and a church member and the best damn harmonica player I know, calling us all home with a medley of “Precious Lord” and “O When the Saints Go Marching In.”

And just before they began telling their stories we sang,

It was also just after Suzanne, one of our church members who is a member of the Biblical Storytellers, delivered the story of Jesus and Peter at breakfast from memory and with meaning. The story is one of my favorites from the gospels. Peter, still despondent from his failure in the courtyard, had been fishing all night with his friends when Jesus called out to them from the shoreline. When Peter realized who was calling, he shucked whatever clothing he had and swam to shore, coming up in need of a robe and redemption, and probably in that order.

With the scene in my head as we began singing, I jotted down,

morning has broken
broken open –
like an egg
or heart
broken through
like a prisoner
or a prayer
darkness falls
but morning breaks
Peter at breakfast
broke like the morning
“yes, Lord, you know
I love you”
every day we live
is broken
before it starts

About the time I finished scribbling, we got to the third verse:

When Cat Steven’s sings it, he pronounces the second word in the final line with a short e, the way we say the word when we mean something we do for fun rather than meaning to create over again. Though we usually sing the second meaning in church, it seems, I think Cat is on to something: God at play. At its very core, its very essence, creation is a reflection of God having fun.

I am in the process of becoming a morning person again, now that I am back teaching. I haven’t stopped being a night owl, which is causing some issues when it comes to getting enough sleep, but I am seeing more of morning than I have in a long, long time. I walked out into a beautiful spring morning and couldn’t help but find the hymn again as I walked to my car. I’m not sure what clicked – maybe it’s the part about being on my way to teaching English – but I realized the song was not about morning being broken, but about morning having broken, as in having broken through.

darkness falls
but morning breaks through

The day is not what is broken, but what does the breaking, scattering chards of darkness all over the place. Morning has broken like that first morning when God said, “Let there be light,” accompanied by a giant belly laugh with enough playful energy to burst that first dawn into existence. When it comes to playing, God means business. The juke box in my mind switched to Michael Been and The Call:

There are days we break through or in or out, and then there are days we end up broken on the beach, like Peter, hoping for forgiveness and maybe some breakfast. Either way, most every day holds its share of broken places, as Leonard Cohen reminds us.

May it dawn on us that we belong to a God whose love and laughter are deep enough to fuel suns and forgive stumbling saints who wash up on the beach at breakfast, or stuck in traffic, or standing in line at Starbucks.

Here’s to you, my little love, with blessings from above. 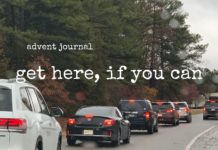