In my search for a writing prompt after a long, busy, and good day at the restaurant (we served more people than we ever have: 108 – in 180 minutes) I stopped by The Writer’s Almanac and learned today would have been John Updike’s seventy-seventh birthday had he lived only a few weeks longer. In the description of him and of his writing, he was quoted as saying, “My only duty was to describe reality as it had come to me — to give the mundane its beautiful due.”

I looked up mundane just to see what I might find. We use the word to mean the boring, routine stuff, yet the roots of the word go back centuries and find their first meaning as “belonging to the world.” Mundane things are the stuff every day is made of. Related words include everyday, routine, unremarkable, workaday, quotidian.

I love that word: quotidian. For reasons that have nothing to do with etymology, quotidian always makes me think of quixotic, which derives its meaning from Don Quixote, one of the great characters of literature and an extravagant romantic.

A quotidian Quixote, then, would be an everyday romantic, I suppose.

Wait – I have a picture of one: 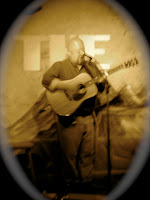 And now he must rest; tomorrow holds the promise of another everyday.