Two unconnected things crossed my path today and I’ve been sitting here for the last half hour thinking about how they are connected. The first came my way through Jimmy, who served as a conduit to connect me to another guy talking about the fiftieth anniversary of gra

phic designer Gerald Holtom’s creation of the Peace Symbol, which was initially prepared for a protest against nuclear arms in 1958 in England. The story goes on to explain how Holtom came up with the design: he overlaid two letters of the semaphore alphabet, N and D, to stand for nuclear disarmament, and then put a circle around them. In writing to a friend about it later he said,

I was in despair. Deep despair. I drew myself: the representative of an individual in despair, with hands palm outstretched outwards and downwards in the manner of Goya’s peasant before the firing squad. I formalized the drawing into a line and put a circle around it.

Out of his despair came one of the most enduring symbols of my lifetime.

A couple of years ago, I learned about Improv Everywhere, a group who likes to “create scenes,” as they say by getting people together (agents, as they call themselves) and doing something out of the ordinary to make people break out of their regular routines. Their latest mission is called “Food Court Musical.”

Whether it’s the peace movement or an improvisational flash mob, the questions are: How do you get people to look up from their Big Macs and notice what is going on around them. How do you push through the despair of the world’s situation or the complacency of people to find a way to move them? How do you keep from falling back into despair when they clap and continue shopping or put the symbol on a t-shirt and go on about their day?

At least, those are my questions.

Jesus had his own improvisational flash mob on what we call Palm Sunday, with people waving palm fronds and shouting, “Hosanna,” as he came into town. By the end of the very same week, the title of “King of the Jews” had taken a nasty, ironic turn even as many of the same folks waving palm leaves had taken to hurling insults and clamoring for his execution, making it seem as if despair had the upper hand, which it had.

Over the years, Palm Sunday has bothered me because I feel as though we wave the branches and sing, “Hosanna,” emulating the very crowd that turned on Jesus – and I’m not always sure we’re aware of the irony in our actions. Something in the juxtaposition of semaphore and singing in the food court made me wonder if I’m missing the deeper meaning by describing what I see as a well intentioned miss of the point. Perhaps that, on the last Sunday in Lent, all we know to do is wave palm branches like they did for Jesus speaks to the despair and disquietude of coming to terms with Jesus’ death. News this week of another incident of clergy abuse by someone I knew long ago, along with word that my sister-in-law’s sister-in-law found out she has pancreatic cancer days before her husband is to be deployed to Iraq, to the murder of a student at UNC who was apparently killed randomly as a part of a gang initiation, not to mention the larger crises around the world, and my arms sag like the semaphore signaler, palm fronds drooping downward in despair. How can I keep saying, “Peace, peace,” when there is no peace?

A little over twenty years ago, Reagan bombed Libya in retaliation for the deaths of two American soldiers. A few years later, I was reading Hauerwas and Willimon’s Resident Aliens, in which Willimon describes a conversation in one of the dorms (here at Duke) about how the church should have responded to our nation’s answering violence with violence. Willimon said something like, “The Christian response would have been for five thousand Christians to have flown to Libya as soon as Reagan started threatening to bomb so he couldn’t have bombed without hurting one of them.” Then Willimon showed his despair by saying, “There was a time when the church could have done that, but church today is incapable of such a gesture.”

I understand his point and I don’t want to let myself completely buy into his cynicism. Part of what Palm Sunday tells us is the church has been broken and flawed from the start. We’ve always been a conflicted and confused people. We, the body of Christ, have a hard time thinking beyond ourselves: our needs, our dreams, our fears. If the story of Easter depended on us, it would have ended on Friday, with the disciples sitting in the Upper Room talking about what might have been. But we are not the last word.

As our arms tire and our fronds fall to our sides, hope begins to take root in our despair and grace seeps into the cracks in our resolve and the contradictions of our collective conscience. We are not the last word.

As far back as I can remember, I’ve signed my letters and most anything else the way I sign each post on this blog: Peace, Milton. It is more than platitude to me. I know peace is scarce in our world, as much now as most any time in my life, which is only about a year longer than the peace sign has existed. If I truly ache for peace, then I have to move beyond the violence of words that criticize the church without offering something beyond the despair. Waging peace is not a solitary act. I do my best peacemaking when I am willing to see myself as one of those who waves palm branches with both commitment and contradiction, because I want Jesus’ entry into our lives to really change things – to really change us. I, too, am one of the broken and despairing ones, yearning for hope. 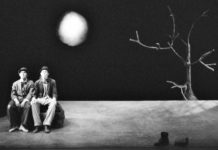