One of the regular joys of my life is reading Lewis Lapham’s “Notebook” each month in Harpers. Lapham announced in the May issue that he is stepping down as the editor, though he will still continue to write for the magazine six times a year. I love reading Lapham because he believes and demonstrates that words matter. He also has the ability to contextualize what is going on today with an amazing grasp of history. And he writes some amazing sentences that leave me speechless because they show what a person can really do with the English language. For example:

“In other words, a long if desultory conversation with people whom I wouldn’t recognize in a bookstore or a police lineup, but from whom I’ve learned that it is the joint venture entered into by writer and reader – the writer’s labor turned to the wheel of the reader’s imagination – that produces the energies of mind on which a society depends for its freedoms and from which it gathers the common store of its hope for a future that doesn’t look like an early Mel Gibson movie.”

He makes me believe words can change things. He starts each of his essays with a quote. This month, it was from Wallace Stevens.

I went to the kitchen late today because I was asked to participate in an Eagle Scout ceremony for two of the kids in my youth group. Hanover is Boy Scout Central. I’ve never seen a town support scouting the way they do. They have so many guys who qualified for Eagle this year they’ve had to do the ceremonies in two. Most of the ceremony was designed to educate the audience on the basics of scouting and the amount of time, energy, and determination the two guys put in to earn their Eagle. I got the point.

As they were going through the various things a scout is (none of which I can remember right now), the scout master annotated each one. The explanation I remember related to the word “obedient.” (Not one of my favorite words.) His explanation, in part, said, “If you disagree with a law, you work to change it through the system, rather than disobeying it.”

Coffin I heard yesterday on Fresh Air, as Terry Gross’ tribute to him. He was a man who saw civil disobedience as a crucial means of protest. I thought of Martin Luther King, Jr. and the Montgomery Bus Boycott, or the brave souls who sat at lunch counters knowing they would be beaten for breaking a stupid hateful law. I wanted to offer a minority report: wear your Eagle proudly and play a blue guitar. We don’t need more obedient people who wait for things to change. Life means more than, “Thank you, sir, may I have another.”

They killed Jesus for being disobedient. He just wouldn’t go along with the status quo, so they killed him. That’s the short version. Jesus played a blue guitar – on the Sabbath, no less. You don’t make the Keepers of Order happy by breaking into the guitar solo from “Free Bird” while they are forcing people into line. You don’t get a merit badge for making people uncomfortable. You go down for that. The blue guitar is part of the reason I sit here late on a Saturday night waiting for Sunday when disobedience wins and we get to believe that justice really can roll down like water.

I wish I could paint my guitar blue for the sunrise service. Our senior high group leads the worship and we do the hymns with guitar. The tradition at Hanover is to close the service with “Lord of the Dance.” It’s a zippy little song that tells the story of the Incarnation in five verses to a variation on the Shaker tune, “Simple Gifts.” The youth group loves the song and find it somewhat amusing because the rather buoyant melody doesn’t let up when the lyric turns somber, so you end up with a rather jaunty Crucifixion verse.

I danced on a Friday
When the sky turned black –
It’s hard to dance
With the devil on your back.
They buried my body
And they thought I’d gone,
But I am the Dance,
And I still go on

We all smile at

each other as we sing and, when we finish the song, for some reason we all feel compelled to talk like pirates. for a few minutes. Sydney Cater, who wrote the song, said, “I see Christ as the incarnation of the piper who is calling us. He dances that shape and pattern which is at the heart of our reality.” Jesus is a dancer. That makes me not so Christ like in this regard, though I do have a coffee mug, thanks to my friend Cherry, with a picture of Jesus in a t-shirt that says, “Trust me I’m a DJ.” As Coffin says, “The only security in life lies in embracing its insecurity. And faith in Jesus Christ, far from diminishing the risks, inspires the courage to take them on – all of them, including the risk of intellectual uncertainty” (Credo 144).

The two guys who got their Eagles today are our speakers at the Sunrise Service in the morning. They are both people whose faith matters deeply to them, and who know how to play on a blue guitar, their Tuesday night scout meetings notwithstanding. They did well today. They chased down a dream and caught it and got a medal for it. I’m proud of them. I’m honored that they asked me to do the benediction. As I spoke, I mentioned my favorite words about Jesus in John’s gospel: “Knowing that he had come from God and was going to God, Jesus took a towel and wrapped it around his waist and bent down to wash the feet of his disciples.” I had to at least plant the seeds of insurrection.

Jesus’ understanding of where he had come from and where he was headed gave him the courage and the compassion to break all the rules in the name of Love. Truly, things as they are are changed when they’re played on a blue guitar. 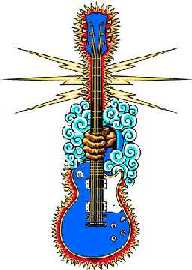