Sunday was an amazing day, an overwhelming day, and an exhausting day. I had every intention of writing last night, but fell asleep before the Housewives had time to get desperate. I came home with an armload of gifts and notes that will take me a week or two to read. Since I was at the restaurant today for twelve hours, I’m at the end of another day without much time or energy to write, but I’m trying to keep my promises to myself.

I’m not capable of unpacking all of my thoughts and emotions from yesterday just yet. There’s too much there. What I can talk about is how grateful I am to have been a part of the church in Hanover, to have come to know so many wonderful people, to have had a chance to be with a great group of young people, and to been sent on my way with such love and intentionality. Growing up in Baptist life, I saw pastors leave quickly. He (most always he) announced his resignation one Sunday and was gone in two weeks, leaving the church to muddle through the grief on its own. The UCC has a much more intentional process, which requires both pastor and congregation to say goodbye well. I resigned in July; I left yesterday. There’s even a liturgy of release and Godspeed in which we forgave each other, thanked each other, and released each other from the bonds of calling. We did good and important work yesterday.

I have “left the ministry” twice in my life. I stepped out of vocational ministry when I began teaching full time and I did so again yesterday. As I drove to work this morning, I decided maybe the best way to describe the move I have made is to say I’ve retired from vocational ministry to be a chef and a pastor’s spouse. I love the church, struggles and all, and I feel called to be a member, not a pastor, in the same way I love being around young people and don’t feel called to be a parent.

So here, two months from my fiftieth birthday, I’ve retired from my second career. I retired from teaching when we moved to Marshfield; now I’ve retired from ministry. (Neither offers much of a pension. My retirement plan is to drive into the desert when the money runs out.) I regret neither career. Both have been deeply significant, rewarding, and important. For the days I did them, I was doing what I was meant to do and learning about who God was calling me to be. As I head into my second fifty years, I get to chase my two passions: being with Ginger and cooking for others. All of the journey was worth it.

My friend Caroline was kind enough to send me the e.e. cummings poem I (mis)quoted the other day when I said “love is stronger than forget.” His words fit well here.

My friend Betsey took pictures yesterday. The one below is of me holding the chalice the church gave me as a symbol of our time together – on World Communion Sunday, no less. What an amazing gift. I got to drink from it as we celebrated the supper together. I will be drinking from the memory of my days in Hanover for a long, long time. 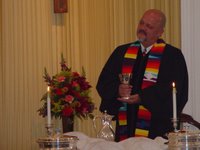