When we moved to Durham, we didn’t buy a house right away, mostly because we still owned in the free-falling New England housing market that we had to sell. We rented a place for the first three months that, in hindsight, ended up letting us get to know our new hometown before we decided where we wanted to live. We spent many afternoons driving up and down streets, trying to get a sense of what was available, what connected to what, and what felt like it could be home. We ended up in the perfect place for us: an urban neighborhood within walking distance from almost everything with a variety of people, a house that didn’t require too much work, and room for the pooch to run in the back yard. I thought about our process last week when I read an article in The Economist called “The Big Sort” that talks about how many of us Americans – at least the ones with means – are segregating ourselves into like-minded communities:

Americans move house often, usually for practical reasons. Before choosing a new neighbourhood, they drive around it. They notice whether it has gun shops, evangelical churches and “W” bumper stickers, or yoga classes and organic fruit shops. Perhaps unconsciously, they are drawn to places where they expect to fit in.

Where you live is partly determined by where you can afford to live, of course. But the “Big Sort” does not seem to be driven by economic factors. Income is a poor predictor of party preference in America; cultural factors matter more. For Americans who move to a new city, the choice is often not between a posh neighbourhood and a run-down one, but between several different neighbourhoods that are economically similar but culturally distinct.

For example, someone who works in Washington, DC, but wants to live in a suburb can commute either from Maryland or northern Virginia. Both states have equally leafy streets and good schools. But Virginia has plenty of conservative neighbourhoods with megachurches and Bushites you’ve heard of living on your block. In the posh suburbs of Maryland, by contrast, Republicans are as rare as unkempt lawns and yard signs proclaim that war is not the answer but Barack Obama might be.

The article goes on to describe some of the consequences of our grouping:

Because Americans are so mobile, even a mild preference for living with like-minded neighbours leads over time to severe segregation. An accountant in Texas, for example, can live anywhere she wants, so the liberal ones move to the funky bits of Austin while the more conservative ones prefer the exurbs of Dallas. Conservative Californians can find refuge in Orange County or the Central Valley.

Over time, this means Americans are ever less exposed to contrary views. In a book called “Hearing the Other Side”, Diana Mutz of the University of Pennsylvania crunched survey data from 12 countries and found that Americans were the least likely of all to talk about politics with those who disagreed with them.

I can’t help but think talking about faith with those who disagree with us can’t be far behind. With the notable and wonderful exception of Borg and Wright’s book, The Meani 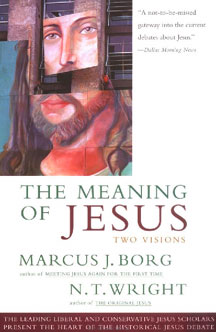 ng of Jesus, which grew out of both their faith and their friendship, I don’t know of many models of mutuality and maturity when it comes to talking across fences to one another. We know how to yell. We know how to cast stones and aspersions. We even know how to blog. And we struggle to embrace each other as disciples of Jesus together. It’s easier to stay within our smaller circle, though I’m not sure that’s all there is to it.

Here’s what I know about me. I grew up Southern Baptist and have found my way to the United Church of Christ, which comes pretty close to running the gamut of the American Christian continuum. I haven’t been a member of a Baptist church in almost twenty years. This summer, thanks to relational connections that have weathered well over time, Ginger and I are going back to Texas to lead the Baptist Laity Institute with Gordon and Jeanene Atkinson. Though I’m moving back into circles of my past, I’m also moving into unfamiliar territory in many ways. I’m a bit scared, actually.

How odd to think about entering into Christian community and wondering how I will welcome and be welcomed. I should not be so out of practice.

Many years ago, I was leading a small group on a youth retreat and asked the kids to write down the names of those they knew who were not Christians. One girl – a senior in high school – looked perplexed and said, “I live in a Christian family, I go to a Christian school, and I go to church; I don’t know anyone who isn’t a Christian.”

I felt sad because she was missing so much of life.

I live in a Christian home, go to work in (how shall I say?) an environment that doesn’t particularly fosters more profanity than prophecy, and I go to church – my church. I try to catch up with the vocabulary that blows around on the blogs – missional, emergent, incarnational – and I recognize some of it, wrestle with some of it, resonate at times, and wonder how reading and listening to people who profess the same faith as I feels like working with a foreign language?

Each Sunday in our worship, as we move from, as we say, “having gathered to preparing our hearts for worship,” Ginger says, “Take a deep breath – now let it out; breathe in the breath of God, breathe out the love of God.” There’s a place to start. The next step, it seems to me, is to listen before I begin staking my claim. If we are one in the Spirit, I must trust I am, like everyone else in the room, coming from God and going to God. I am not God’s defender or chief spokesperson; I am called to welcome everyone with the same open arms Jesus held out to all comers.

Now, I need to get out of my neighborhood and live out my words.