Ginger and I moved to Boston in August of 1990 and settled in Charlestown, the neighborhood of Boston that is home to Bunker Hill and the USS Constitution. We had not been in town long when we started going to neighborhood meetings about the impact of The Big Dig, which was the nickname given to the tunnel they planned to build under Boston so I-93 could run under the city rather than through it. The reason we were having meetings was the highway would come back above ground in our neighborhood.

In 1991, even as meetings and protests continued, they broke ground on what has become the most expensive public works project in American history. When we were going to meetings, they said it would cost $2 billion; by the time they said the tunnel was finished in 2004 (even as construction crews have continued to work), it cost $15 billion. The builders were The Bechtel Corporation, who have friends in high places which has helped them land lucrative work rebuilding along the US Gulf Coast and in Iraq – all at far more than bargain prices.

The point of this strange little history lesson is this morning at 3:30 a 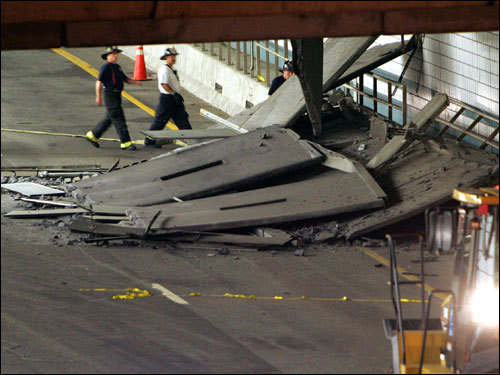 m, a car was traveling through one of the tunnels on the way to Logan Airport when a couple of Bechtel’s concrete ceiling panels, weighing a couple of tons each, broke loose from their steel ties and – to use one journalist’s verb – “pancaked” the car. A woman in the passenger seat was crushed and killed; the male driver was able to crawl out of a twelve-inch hole on his side because the panel fell at an angle. The tunnel and that section of the Mass Pike remained closed all day, as they will tomorrow, and traffic became more of a nightmare than normal. Our State Attorney General announced he wanted to file manslaughter charges and was treating the closed tunnel as a crime scene. All the local news outlets have been filled with stories of speculation, suspicion, and accusation. The politicians and government officials have tried to act as though they cared about the mismanagement of the project all along. Everyone is making lots of noise trying to explain, and no one is saying much of anything that matters.

And I keep thinking about the random tragedy of one car in the tunnel at three in the morning who, in one horrible moment was exactly where the giant piece of concrete fell. Five seconds later and she would have been the one on the news talking about a near miss. Instead, a thirty-eight year old woman is dead.

What do we do with that?

Years ago, my mother, whose sense of predestination would make John Calvin look indecisive, was booked on a Delta flight to somewhere and changed her plans at the last minute. The plane crashed.

“God really took care of me,” she said.

She found great comfort in her statement. I didn’t because, for me, it carried with it an inseparable corollary: God didn’t take care of the others. I don’t see how you can claim one half of the equation without the other. I also don’t think God works in that your-number’s-up kind of way. In the case of the woman in the tunnel, God was not the one dropping the concrete at just the right moment because it was “her time to go.”

Tomorrow Ginger is leading a funeral for a wonderful man from Marshfield named Bob who dropped dead this week at thirty-four. They are still trying to figure out what happened. Bob was co-owner of a skate and surf shop here in town and, from every account, was one of the most kind and loving human beings around. He had a huge heart, an adventuresome spirit, and an open door. He will be deeply missed. They are expecting over five hundred people to gather in the Skate Park for his service tomorrow. The autopsy report will come in the days that follow and answer some questions, but it will not help anymore than saying it was God’s will.

When it comes to tragedy, explanations don’t help one damn bit. The only words that can find us are those who speak to our souls. I “placed my grief in the mouth of language,” wrote poet Lisel Mueller, “the only thing that would grieve with me.” We explain to assuage our fear, or to focus blame; there is another language for sorrow and hope.

Try to praise the mutilated world
Remember June’s long days,
and wild strawberries, drops of wine, the dew,
The nettles that methodically overgrow
the abandoned homesteads of exiles.
You must praise the mutilated world.
You watched the stylish yachts and ships;
one of them had a long trip ahead of it,
while salty oblivion awaited others.
You’ve seen the refugees heading nowhere,
you’ve heard the executioners sing joyfully.
You should praise the mutilated world.
Remember the moments when we were together
in a white room and the curtain fluttered.
Return in through to the concert where music flared.
You gathered acorns in the park in autumn
and leaves eddied over the earth’s scars.
Praise the mutilated world
and the gray feather a thrush lost,
and the gentle light that strays and vanishes
and returns.

Jesus’ words about tragedy were about God knowing when a sparrow fell. He did not say God pushed the sparrow on cue, nor did he say God caught the little bird before it hit the ground. He said God was present in the midst of even one of the smallest tragedy imaginable.

Let us praise our mutilated world.