Years ago, when I was teaching at Charlestown High, we got in to a class discussion about fighting. It had nothing to do with the book we were reading. There had been a fight in the school that day and I asked the kids what happened. As we talked and I continued to ask questions, one of the students said, “Mr. B-C, you never hit anyone in your whole life, did you?”

He was pretty close to right. Other than Johnny Pike’s challenge to meet him on the playground after school to settle an argument over our sixth grade science project (of course he won – his name was Johnny Pike and I’m called Milton!) and a couple of shoving matches with my brother along the way, I’ve never taken a swing at anyone. Violence doesn’t make sense to me – and not because I think I would mostly end up on the losing end of the battle. Violence is not a solution to anything.

I know some of you think I’m naïve or idealistic. Violence is a part of life and there’s no way around it. There will always be wars and rumors of wars. It’s in the Bible. To take an Edna St. Vincent Millay line completely out of context,

“I know. But I do not approve. And I am not resigned.”

I drove to church yesterday morning to the news of the Israeli air strike on the Lebanese town of Qana. At least fifty-four people were killed and over half of them were children. They were hiding in the basement of the building to get away from the bombing. Israel’s explanation was they believed rockets were had been fired from that building into Israel. Israel announced a forty-eight hour halt to the bombing so humanitarian aid could get in, people could get out, and an investigation could begin, but then said the bombings would continue since “the extremists will rear their heads anew.”

While most of the world is calling for an immediate ceasefire, Bush and Rice refuse to do so, saying they want to assure something more permanent, which I read as a not so coded message to Israel to get in as many shots as they can. A ceasefire of any kind makes sense because it means both sides stop the madness. There’s plenty of blame to go around on all sides. There is plenty of tragedy too. The way to peace is not to say, “You guys keep fighting while we figure something out.” All that means is were hoping someone can open a big enough can of Whupass to wipe out the other one and none of us will have to take peace seriously.

I mean, come on. Peace? Seriously?

On another occasion at Charlestown High, when I was new and working still as a substitute teacher, I took a student to the Dean of Discipline because he was swearing profusely in class – mostly at me. The woman who was the Dean was good at her job and known for her straightforwardness and her – how shall I say? – earthy approach. The student sat down across from her and I explained what had happened. She looked disgustedly at the student and said, “What the fuck are you swearing at Mr. B-C for?” and she gave him detention.

I wasn’t sure that was the best way to get her point across. All he knew was she could swear and he couldn’t. The real lesson was when you’re in charge you can do what ever you damn well please.

Living by “an eye for an eye and a tooth for a tooth” will leave us all blind and toothless. (Thanks, Ghandi!) We don’t start saving eyes and teeth by telling the ones with less power they are wrong, or saying an army can exact the same kind of violence as the insurgents but it’s OK for the army because they are an official government organization. It’s the same lesson: get enough power and you can do anything you damn well please. Maybe peace is unrealistic. But how realistic is it to think the solution is in continuing to bomb and fight?

In George Orwell’s 1984, the government’s promise of the future is “a boot stomping on a human face forever.” As inevitable as violence appears to the human condition, I refuse to assume it is a foregone conclusion.

“I know. But I do not approve. And I am not resigned.” 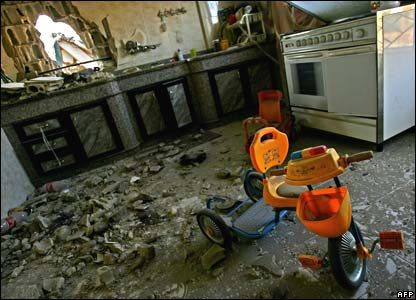