To get up at five-thirty on a Thursday morning in the middle of a week where, thanks to presidential debates and baseball playoff games, I’ve not gotten enough sleep anyway seemed like a ridiculous idea. To spend a couple of hours walking from Chavis Park to the State Capitol in Raleigh when I had a new menu to finish and errands to run before work, not to mention an eleven hour day ahead of me, seemed a less than prudent choice on my part. And yet, when Ginger told me of the email invitation she had received from People of Faith Against the Death Penalty to join in the NAACP “Pilgrimage” to kick off its sixty-fifth state convention, making meaning felt more important than making sense. So we set the alarm, got up, and drove across the triangle to join the other early morning pilgrims.

By the time the sun had risen, we were about fifteen strong standing in the parking lot, with six or seven camera people and reporters hovering around us. A car pulled up and an older African-American woman emerged wearing a purple suit with clergy collar. She had a booming voice and a powerful personal presence. She stepped into the middle of our circle and, without saying a word, began to sing:

O God our help in ages past, our hope for years to come
Our shelter from the stormy blast and our eternal home.

She welcomed us, gathered us, and then launched into a prayer that managed to encapsulate much of the biblical call to justice and the history of civil rights in our state in her four or five minute entreaty. She then explained we were part of a pilgrimage that began in Wilmington NC several days ago. Across the state, groups had gathered to walk a total of sixty-five miles, one for each year of the NAACP’s existence in North Carolina. Then she said, “I know we are a small group, but that doesn’t bother me. Jesus began with just twelve.”

And with those words we began our quixotic march to the Capitol. In the tradition of those who had marched before us for similar reasons, we chanted: 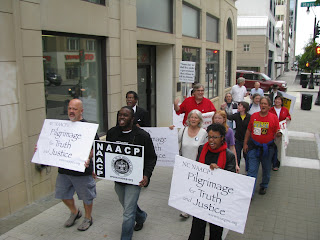 We were young and old, black and white, strong and weak, pounding the pavement in our quest for justice. One man in his eighties walked the whole way leaning on his cane. When we got to the state house, we gathered for a brief rally – more prayer, more singing, and some brief words of encouragement. We had not been there long when five or six of the State Capitol Police came to tell us the old man with the cane could not sit on the steps of the Capitol because we didn’t have a permit. I’m sure you will all be glad to know the Capitol Police are so diligent in keeping the building safe from domestic terrorists armed with canes, banners, and songs.

At the restaurant at Duke, I have a student who wants to learn more about cooking who works with us a couple of nights a week. On Monday I asked him if he was taking any interesting classes and he began telling me about a philosophy/logic course he was taking where they were discussing the Prisoners’ Dilemma. The term was new to me. As he explained it, if two people get arrested for a crime, are separated, and offered the change to make a deal, the dilemma is whether or not to cooperate with the police. The consequences, as far as jail time, change depending on whether both remain silent, both talk, or one or the other capitulates. What my student took from the discussion was cooperation was basically illogical and unscientific. The most logical course was to get the best deal you could get for yourself and let everyone else do the same.

In the midst of searing salmon and grilling steaks, we talked about whether life is best, or even most logically, measured by acquisitions or relationships. What I took away from our discussion was his premise was trust is an illogical act. It doesn’t make sense.

It does, however, make meaning.

“This is what the Lord requires of you,” Micah said: “do justice, love kindness, and walk humbly with your God.” Those magnificent words are an invitation not only to life, but also futility and pain, because they call us to incarnate trust as a fundamental human trait, regardless of logic. We are called to hold each other accountable; called to choose to live redemptively rather than logically; called to follow in the steps of a God who dreamed up falling stars and falling leaves, peacock feathers and peonies, prophets and protest marches. Our faith is an exercise in fundamental and fantastic futility.

With each day’s (hour’s) new of the deepening financial crisis around the world, we will be faced with the logical temptation to make sure we get what’s ours. Cooperation doesn’t make sense; everyone for his or herself. Who had the time or energy to make sure we’re doing justice or loving kindness when life feels so unsure?

On the drive back to Durham it was daylight and we could see the banks of wildflowers along either side of the interstate. I couldn’t help but hear the wonderfully illogical words of the One who tramped around with his band of twelve as if they could change the world: “Consider the lilies . . . .”

It was as if the flowers themselves were singing:

Lift every voice and sing till earth and heaven ring,
Ring with the harmonies of liberty;
Let our rejoicing rise high as the listening skies,
Let it resound loud as the rolling sea.
Sing a song full of the faith that the dark past has taught us,
Sing a song full of the hope that the present has brought us;
Facing the rising sun of our new day begun,
Let us march on till victory is won.