I’ve been thinking about faith a great deal as Election Day approaches because I despair in our election process. And I am not alone. As I sat down to write, I typed “voting quotes” into the search window. Here are the first few that showed up:

If I look at my experience in American life and politics, I have to say they’ve pretty much nailed it. This election cycle has only deepened my skepticism, if not my cynicism, in the whole process. The presidential campaigns have spent enough money to eradicate poverty and have been evaluated by a feckless and pompous media primarily on how well each postured in their public debates. Ain’t democracy grand. 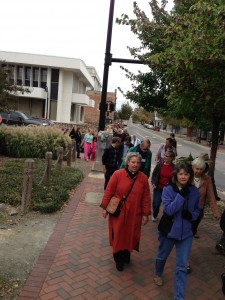 But cynicism is the easy way out. To decide I am above such a display is the arrogant intellectual equivalent of taking my toys and going home — or so I was reminded as I took part in the “Souls to the Polls” gathering here in Durham last Sunday afternoon. The march across our downtown from First Presbyterian Church to the Early Voting Station at the Durham History Museum was sponsored by Durham CAN (Congregations, Associations, and Neighborhoods) which is an organization that brings a cross-section of our city together to solve problems. By their own definition, they choose “winnable fights,” so I was intrigued that they would see a voting drive as such a victory because not one of us in the room had enough money to buy our way into any of the halls of influence. There were no media representatives present. We had no signs or placards. We didn’t even have police to monitor the intersections as we marched; we waited for the crossing signals. On a rainy Sunday afternoon, about two hundred of us walked across town and voted.

And I was reminded that voting is an act of faith: the substance of things hoped for, the evidence of things not seen.

And God is not interested merely in the freedom of black men and brown men and yellow men, but God is interested in the freedom of the whole human race and the creation of a society where all men will live together as brothers. No, we need not hate. We need not use violence. There is another way, a way as old as the insights of Jesus of Nazareth, as modern as the techniques of Mohandas K. Gandhi. There is another way, a way as old as Jesus saying, “Love your enemies. Bless them that curse you. Pray for them that spitefully use you,” as modern as Ghandi saying through Thoreau, “Noncooperation with evil is as much a moral obligation as is cooperation with good.” There is another way, a way as old as Jesus saying, “Turn the other cheek.”
And when he said that, he realized that turning the other cheek might bring suffering sometimes. He realized that it may get your home bombed sometimes. He realized that it may get you stabbed sometimes. He realized that it may get you scarred up sometimes, but he was saying in substance that it is better to go through life with a scarred-up body than a scarred-up soul. There is another way. This is what we’ve got to see.
And oh, there is a power in this way, and if we will follow this way, we will be the participants in a great building process that will make America a new nation. And we will be able to transform the jangling discords of our nation into a beautiful symphony of brotherhood. This is our challenge. This is the way we must grapple with this dilemma, and we will be a great people.
And let us have faith in the future — I know it’s dark sometimes. And I know all of us begin to ask, “How long will we have to live with this system?” I know all of us are asking, “How long will prejudice blind the visions of men and darken their understanding and drive bright-eyed wisdom from her sacred throne? When will wounded justice lying prostrate on the streets of our cities be lifted from this dust of shame to reign supreme among the children of men? Yes, when will the radiant star of hope be plunged against the nocturnal bosom of this lonely night and plucked from weary souls the manacles of death and the chains of fear? How long will justice be crucified and truth buried? How long?”
I can only answer this evening, “Not long.”

In the morning before we marched that afternoon, Ginger preached on Jesus’ healing of Bartimaeus, the blind man who was given his sight. “Throw off your cloak,” Jesus admonished Bartimaeus, as though the cloak was a part of the blindness. “Throw off the unfamiliar,” Ginger challenged us. “Do you want to be healed?”

She went on to quote from a sermon by William Sloane Coffin in which he asked, “How do we feel about what we think?” How are our lives informed by what we say matters to us. How does what we think about certain issues find incarnation in our lives? It is in the answer to that question that faith becomes a verb. I think our nation hungers for real leadership. I think those with the microphones in this country are not saying what matters most. I think we as Americans are more driven by convenience than compassion. I think we need revolutionary change in our country.

How do I feel about what I think? If I choose to do so, I can feel cynical and despairing. Even hopeless. But such is not my choice. I, who has never had a letter answered by a politician, walked across town with people who were acquainted with grief and discrimination in ways I’ve only read about, yet who walked with determination and purpose to the polls. When I got there, I was greeted by a young African American man and an older white woman, both of them offering smiles and words of congratulations. And I voted. Not because I believed, all of a sudden, that my ballot had some sort of magic power. I voted as an act of faith: the substance of things hoped for, the evidence of things not seen.

How long before love gets the last word? Not long.