Last night our little town of Durham lay in the path of a winter storm working it’s way up the East Coast and we got enough snow to make it feel real. Once the ground was covered, I walked out into the street to take a picture of our house with lights aglow. Because the first attempt let me know the shutter speed was too slow for me to hold the camera steady, I flipped open the flash and took another one, lucking into this wonderful shot of the illuminated house framed by the shining snowflakes caught in the flash of the moment. 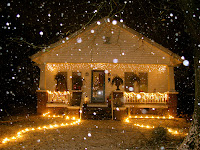 I managed to get up and out of the house this morning to run some errands and end up at Guglhuph, one of our great local places, for lunch with Ginger and a Massachusetts friend who is moving to the area. I got there early so I would have some time to read, sat down with my coffee, only to find Raymo talking about photography and referring to Janet Malcolm, who says the serious photographer resists “the blandishments of color.”

“It is black-and-white photography,” she says, “that demands of the photographer close attention to the world of color, while color photography permits him to forget it” . . . The black-and-white medium is hard, says Malcolm, color easy. The former requires art, the latter doesn’t. (131)

Here’s the house, then, in black-and-white. 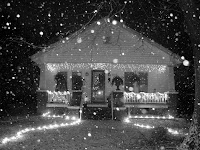 Many years ago, when David Gentiles was youth minister at Hunter’s Glen Baptist Church in Plano, Texas, he invited Billy Crockett and I to come for a weekend. Billy’s concert was the real draw; Dave knew we were working on songs for a new record and he invited me to come along and then he paid for a couple of extra nights in the hotel so we could do some writing. The song that came out of one all-night session was called “Song and Dance,” an unabashedly joyful look at life taking off of the scripture verses that talk about the trees clapping their hands in praise to God, and we wrote:

I still love that song. It is a full-speed-ahead-arms-wide-open-Snoopy-dancing-in-the-leaves-run-and-jump-and-love-will-catch-you expression of hope and faith that still rings true for me. It’s also akin to my photograph in the snow last night, or driving through the variegated splendor of a New England autumn and taking a picture of the leaves. It’s going to be a great picture because you’re taking a picture of something great. But how do you find the spirit in the song when the color drains from the scene?

Grief is in black-and-white: the winter of the heart, a season of skeleton trees, long dark days, and bone-chilling cold. One note I read in the exchange between friends talking about David quoted C. S. Lewis: “No one ever told me that grief feels like fear.” And fear is the antithesis of love and faith and art. We know that well as a nation because we have allowed fear to be our driving force far too often since September 11, 2001, and that fear has robbed us of too much of our imagination, compassion, and hope. Though it may feel like fear, grief is not the same thing. Grief is loss and pain, and coming to terms with our limits and mortality. As the Sundays sing, “Here’s where the story ends.”

Yes and no. It is also where art and faith and love show their strength and offer some of their best music through the circumstance.

Stargazing, like black-and-white photography, demands close attention to color. There are no ravishing sunsets in the midnight sky, no deciduous riots of red and gold in the forest of the night. The snapshooter turns from the telescope in despair, but the artful observer will take the hint and let his imagination enrich the palette. William Henry Smyth fixed his telescope on the stars and saw “crocus,” “damson,” “sardonyx,” and “smalt.” This is the kind of imagination that labels paint chips . . . Of hints and traits we make our way. (135)

Faith and art and love are best expressed as a response, which also means in the context of relationships. The insidious thing about the fear that grips us as a nation is it is generalized: we are scared of big things, broad strokes, which makes us frightened of pretty much everything. Seeing a bogeyman under every bed is not imaginative, it is incapacitating. We respond, therefore, with force and violence, neither of which is artful, faithful, or loving.

The pilgrim who would find his way to the edge of the galaxies and to the beginning of time must forgo daylight’s easy color and launch himself upon the black-and-white sea of the night and in those huge spaces find stars the colors of damson, crocus, grape, and straw. (138)

Jesus, it seems to me, was born in black-and-white, bringing a trace of color into a world full of fear and grief. And the angels sang to the shepherds. As I grieve David’s death, I wait in the dark for a birth, for Christ to be born again this year. I can see the traces of color and the hints of hope in the those of us who knew and loved David – and also know and love each other – have worked to not let grief turn to fear, but are finding ways to share our love, to tighten the bonds, and to imagine we can hear the music, even through this circumstance; we look out into the darkness and we see the colors of “friendship,” “compassion,” and “trust.”

It’s still true — even in black and white.