I went to college in Waco, Texas where winter was more of an idea than a reality.

We had snow – significant snow – two or three times in my four years there, as well as a couple of ice storms. The events were such rarities that school was cancelled even though we all lived on campus and could have walked to class. On one of those afternoons I was walking across campus when I realized the person walking in front of me was the president of the university. He was by himself and he didn’t know I was forty or fifty feet behind him. While I watched, he stopped under a tree whose branches were encased in ice and tapped them with his closed umbrella, causing a noisy rain of icicles on the frozen sidewalk. Then he giggled and did it again.

I don’t know how often he let himself feel that kind of joy and wonder, but I loved that I got to see it happen that afternoon. The memory rose to the surface today because of Ginger’s sermon. She started by telling about a recent trip with her mother to see the Biltmore Mansion decorated for Christmas. She gave us a wonderful virtual verbal tour and ended up describing one of the ornaments that held the inscription, “Christmas brings out the child in all of us.”

“What if,” she asked, “we heard that statement as, ‘Christmas brings out the Child – the Christ Child – in all of us.”

And with those words, her sermon became a call to joy. She went on to quote Charles Spurgeon:

Besides, Christian, dost thou not know that it is a good thing for thee to praise thy God? Mourning weakens thee, doubts destroy thy strength; thy groping among the ashes makes thee of the earth, earthy. Arise, for praise is pleasant and profitable to thee. “The joy of the Lord is our strength.” “Delight thyself in the Lord and he will give thee the desire of thine heart.” Thou growest in grace when thou growest in holy joy; thou art more heavenly, more spiritual, more Godlike, as thou gettest more full of joy and peace in believing on the Lord Jesus Christ. I know some Christians are afraid of gladness, but I read, “Let the children of Zion be joyful in their King.” If murmuring were a duty, some saints would never sin, and if mourning were commanded by God they would certainly be saved by works, for they are always sorrowing, and so they would keep his law. Instead thereof the Lord hath said it, “Rejoice in the Lord always, and again I say, rejoice;” and he has added, to make it still more strong, “Rejoice evermore.”

Listening to the two of them I realized joy is a choice.

I’ve been a part of UCC churches for almost two decades. One of the folks in a previous church described our denomination by saying, “If Christianity were a neighborhood, we would be the last house on the left.” I love our address and (not but – and) I have to admit joy runs thin at our end of the block. We know about courage and resolve, inclusiveness and industriousness, transformation and tenacity. It dawned on me today that we know less about joy. Choosing to let the Christ Child run amok in our hearts chasing the balloons of the Spirit is not our default setting. We aren’t looking to be surprised by joy as much as we are working to live like Jesus. Isn’t it interesting that those could be two different things?

Perhaps joy is not an easy choice. Or, perhaps, we have to learn how to choose it. A group from church went caroling tonight and one couple was walking with Ginger and talking about the sermon. Claudia said she has reduced the sermon to three words: “Be the Baby.” She went on to tell how Suzanne had been reminding her of the sermon throughout the afternoon when she became judgmental or critical.

I worked at the restaurant tonight. I went back to the ice machine to get what I needed for my station and Ramon, one of my coworkers, was there. He works hard as a cook and also works hard on learning English, though, at this point, most of his vocabulary is still restaurant related. When I got to the back, he was filling a small bucket and he looked up, grinned, and said, “Ice, ice, baby,” and we both laughed. Ramon knows about choosing joy.

Towards the end of the evening, Abel, another coworker began singing loudly in Spanish, as he does every Sunday night was we start breaking down the line. He sings well and with gusto. Abel works with me at Duke also. As he began to croon, I called out, “Ramon!”

“At Faculty Commons I have to put up with this everyday.”

“Everyday.” And we all laughed.

We are telling the story of how an unwed teenage girl gave birth to a baby in a barn behind a hotel that had no room – even for a pregnant woman — in a town faraway from her home and was then visited by all manner of people while she had hardly had a chance to clean up. And when we tell the story, we sing

Joy to the world, the Lord has come.

The entire story is shot through with joy from Elizabeth and Mary singing together to the angels telling the shepherds, “We bring you good tidings of great joy which shall be for all people.”

After angels, perhaps knocking ice out of the trees or cracking jokes at the ice machine doesn’t seem like such great joy, but I think both choices created thin places for joy to break through and take hold in our hearts. Our hearts harden gradually as we choose to complain or judge. As Spurgeon said, “If murmuring were a duty, some saints would never sin.” Our calling, however, is not to make the world right but to help make the world whole, which means we must be moving toward wholeness ourselves, moving to be more like Jesus: to be the Baby.

I’m going to finish this post the same way we ended our service this morning, with “Love Came Down at Christmas.” The video I found is by Jars of Clay and shows Mary riding to Bethlehem on a pink unicorn. I think they understand. 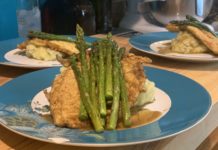