There are some nights I sit down to write what has been brewing all day, then there are others where I begin with a blank canvas and try to get quiet enough to see what ripens. Tonight’s poem comes at the end of a busy day when I don’t feel as though I had time to take in all that was given me to digest. And so I sat quietly and listened to Gavin Bryar’s “Jesus’ Blood Never Failed Me Yet” and here is what found it’s way to the page.

I’ve been staring at my palm
for over an hour: the ladder-like
lines that stack up from wrist to
thumb; the deep rutted roads
that run like poorly planned
highways across an aging desert
of skin. Instead — what if they
are river beds now run dry —
the lesser lines faded-out paths
from days when dreams roamed
these valleys like dinosaurs.

You’re right — I’ve been staring
too long to do much more
than get lost in wrinkled
metaphors and epidermal
esoterica, yet I am still captured
by my little cellular cosmos
held in my calloused hand,
little lines marking mystery
just like the moon did hiding
behind the trees, watching as
we talked among the tomb
stones and then followed
our own well-worn paths
to get home for dinner. 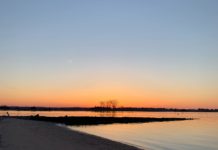