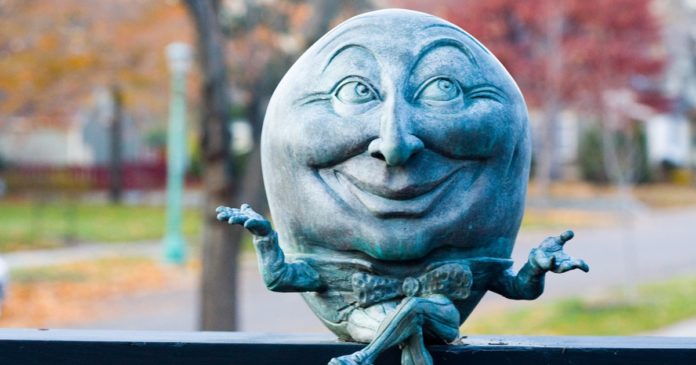 I am preaching this morning at our church in Guilford. The passage for today is Mark 13:1-8.

One of the memories that has stayed with me from my preaching class in seminary is one of a student questioning our professor about how to be original. A knowing smile came across the professor’s face and he said, “Originality is knowing how to hide your sources”—another way of echoing what the writer of Ecclesiastes said: there is nothing new under the sun.

I am going to be clear about my source. Peter Palumbo and I were having coffee yesterday and talking about life and he said, “It’s like that old nursery rhyme, ‘Ashes, ashes, we all fall down.’” And I remembered that nursery rhyme came from the seventeenth century plague in Great Britain that killed fifteen percent of the population. People carried sachets of posies to combat the stench; and “we all fall down” was another way of saying it felt like everyone was going to die.

Life hurts. On lots of levels. Each of us have pain that feels unique to us, and we all have shared pain, or perhaps I would do better to say we have pain we can choose to share—burdens we can bear collectively. The two categories are not mutually exclusive. As I have said before, life and faith are team sports. What we do as individuals ripples out in ways both seen and unseen.

The last six and a half weeks of my life have been focused on recuperating from a total knee replacement. Most every aspect of the process has involved pain of some sort. In the months before my surgery, when the pain I lived with was because my knee was deteriorating, the common wisdom offered me was to put it off as long as I could. I began to question that logic because I thought that the surgery offered me a new lease on life and putting it off just delayed that. So, I scheduled the surgery because the pain of recovery was more attractive than the pain of postponement.

Since my surgery, I have followed the common wisdom that the biggest key to my healing is my commitment to physical therapy. That wisdom is proving true—and it hurts. Healing hurts. One of the things I have learned in the process is how to differentiate between pain that heals and pain that indicates I am hurting myself. My therapist continues to remind me that there is a difference between PT and exercising. The point is not adding more weight at every session or doing more than I did before. The point is to help my knee understand that it is getting better, and I will not always hurt this way.

As much as I would like to mine what I have just told you for metaphors, that last part is where it all breaks down. Our lives are made up of both the pain that heals and the pain that damages, but we don’t necessarily have the choice to avoid the damaging stuff or postpone it. Life not only hurts, it often wounds us. I don’t want to be so flippant as to suggest that all we have to do is keep doing our exercises and things will get better. They might and they might not—which is the point Jesus was making with his disciples in the verses we just read.

Jesus and his disciples were leaving the Temple in Jerusalem, a magnificent building that represented the presence of God to the people who lived there. Even under the oppression of Rome the Temple was a tangible assurance that God was with them. The disciples were awestruck. Perhaps you know the feeling. Can you think of a building where you have stood that took your breath away? Trinity Episcopal Church in Copley Square, Boston is one of those for me. Let yourself go to that place as you hear Jesus’ words in response to their awe:

“See these great buildings? Not a single stone will be left on another. Everything will be torn down.”

A little later, Jesus was with four of them—two sets of brothers: Peter and Andrew, James and John—and they asked not so much for clarification, but for a warning: “What are the signs that this is going to happen?” Are we going to be able to see this coming?

Jesus doubles down with words that read like a Cormac McCarthy novel in many ways, particularly to our American ears so tuned to fear and distrust. But through the whole chapter Jesus keeps saying things like, “Don’t be alarmed when . . . ,” or “Things like this will happen” before he lists some sort of cataclysmic sequence. Wars. Rumors of Wars. Earthquakes. He makes it sound like Chicken Little was right, but then he says–in most translations–“Things like this must happen, but the end is still to come,” which, for those of us who have seen too many disaster movies sounds like an ominous statement. But a better translation would be, “But it is not yet the end,” or “The end is not yet,” which is to say all these horrible things are not the end of the story. God’s story all along has been a story of love. In the end, love wins. Therefore, as we often say, if love has not yet won, it is not the end.

Then he closes with an image that made me chuckle when I thought about it. Jesus was sitting in private with James and John, and Peter and Andrew. To that small circle of men he says, “This is only the beginning of the labor pains,” which is a wonderful metaphorical way to say that God makes meaning out of our suffering on the one hand, but I think it’s funny that he used a metaphor none of them could know experientially. I also find it hopeful. I trust that you can understand my knee replacement metaphorically without having to have one.

The pain we experience in life, whether hurtful or healing, is not a sign that pain is all that there is. When things fall apart, something else follows. Something new. More importantly, God shows up in new ways. Just because the symbols of God’s presence that we have counted on are temporary does not mean that the presence of God is temporary.

Mark 13, from which our passage is taken, is often labeled as “The Little Apocalypse.” Our modern understanding of the word is some sort of disaster–the end of the world–as if the world is going to end in the same violence we appear to be quite adept at perpetuating. But that is not what the word means at its root. It means an uncovering, a disclosure, a revelation, as if to say, “So that is what all of this means.”

Right after we married in 1990, Ginger and I moved from Texas to the Charlestown neighborhood of Boston. Everything felt ancient compared to Texas. The next year we had a chance to go to Paris and we went to Notre Dame, another building intended to symbolize the presence of God. We listened to a tour guide at Notre Dame describe the “new” rose window that was put in the 1500s and smiled at all the things we thought were so old in New England. It felt like that cathedral had and would last forever. It didn’t–at least, not in its original form.

The Temple Jesus was talking about was destroyed in the year 70. It has yet to be rebuilt.

We have gathered in this building this morning, which was also built a symbol of God’s presence. We are still tentative in our gathering because of the pandemic and the questions it has raised about how we can be together without endangering one another, so we gather, but it doesn’t feel like the room we have always known. Just as the disciples had a hard time imagining how they would know where God was if the Temple were destroyed, we are having a hard time figuring out how to be the church when we can’t do it the way we are used to, or when circumstances make it feel like we might not get that chance again.

Some of us miss the fellowship. Some of us miss the singing. Some of us worry that we won’t have enough money to pay the bills. Some of wonder if our kids will keep things going after we are gone. We aren’t having the Harvest Fair this year. By the time we get back to coffee hour, the kids are all going to be two years older than the last time they ran around with fistfuls of cookies. None of us know what lies ahead—and I’m not just talking about church when I say that. We are frightened, anxious, angry, frustrated, depressed. In our uncertainty, the symbols of God that are most attractive are those that offer comfort. Yet, what Jesus offers instead is hope, which is not always comfortable.

Though the pain of my surgery and my recovery in no way compare to what I imagine it feels like to be in labor, the clearest answer I can give to someone when they ask me how things are going is that I am doing well and it all hurts. The only way to continue to improve is to keep hurting. I hurt before the surgery as well, but that bone-on-bone pain that wouldn’t go away was replaced by a pain that offers me hope of being more agile and involved in life. I won’t describe exactly what they did to my knee but suffice it to say they destroyed it and rebuilt it. I am a construction project. I couldn’t stay the way I was and keep walking, so I let them replace my knee, a rather gruesome process that offers me hope.

Our experience of the pandemic over the last twenty months has made obvious what was already true. Things do not stay the same. Life hurts. In many ways, big and small, the walls we thought were solid have fallen down. It feels as though all the stones of our security have been scattered. But none of those things are signs that destruction is the last word, or that the best we can do is hunker down and take care of our own.

The source of our hope in Christ is more profound than perpetuating the things that make us feel safe. The building is not the church. We are the church, the living, breathing Body of Christ, the incarnate love of God alive and hopeful in a world far too easily convinced that pain is the last word. Rather than allow ourselves to be swept up in outrage or cynicism or fear, rather than read the signs of the times as a call to safety, let us choose to remind one another that love is the last word. Instead of joining the chorus that thinks we are doomed, let us be midwives for one another, helping to birth love and hope in each other’s lives.