When I was in elementary school and the first part of junior high, we lived in Lusaka, Zambia. One of my clearest memories is of our Sunday after-church ritual: we would come home and have lunch, and then Dad would wash the dishes and Miller and I would dry them. While we worked, we listened to a British music program called Top of the Pops, which was a hit parade of sorts, and they always debuted new music. New music, in those years, more often than not meant something new by the Beatles. The clearest memory of all is the day I heard “Hey Jude” for the first time. I don’t remember how the deejay introduced it, other than he was sure it was something monumental and different; then Paul started singing.

I bought the single the next day and wore it out.

I woke to the news this morning that record producer George Martin had died in the night. He was 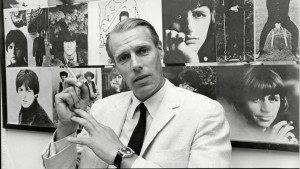 ninety. He was also the man who was responsible for “Hey Jude,” as well the Beatles being known at all, and also for helping to create most all of the memorable moments we know in their songs, which means he was responsible for much of the soundtrack of my growing up.

In an age where I can build a forty-plus track recording in GarageBand on my Mac, he recorded and produced the multilayered sound of Sgt. Pepper’s Lonely Hearts Club Band and Magical Mystery Tour on four track analog equipment, which means he literally did it by hand—with scissors and scotch tape.

I didn’t know that was going on. I think the Beatles had broken up before I even knew who George Martin was. But I can remember what it felt like as a kid to listen to “Nowhere Man,” “Got To Get You Into My Life,” and as a teenager to find “Back in the USSR,” “Blackbird,” and “While My Guitar Gently Weeps,” to name only a few—oh, and “Eight Days A Week” and “I’m Looking Through You” and “Rocky Raccoon” and “The Long And Winding Road” and “Get Back”—with your high heel shoes and I love that sweater . . . .

Someone I never knew, and who never knew me, put his fingerprints all over my life because of the way he made music, because of what he saw in the four lads from Liverpool that others had missed, because he put his heart and soul into his craft and believed in what he was doing.

I listened to Beatles songs all day as I was cooking for our Lenten dinner tonight at church and realized, even beyond my early years, these songs are at the heart of the soundtrack of my life. I am grateful, not only for the songs, but also for the gift of being of an age where I got to hear those songs for the first time when they were played for the first time. Thank you, George.