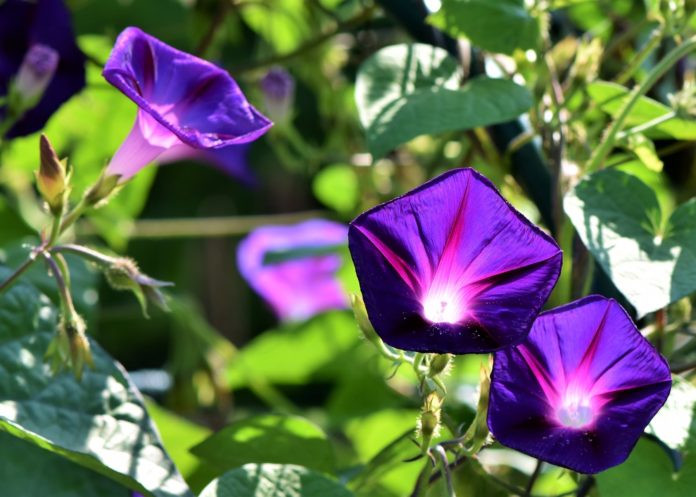 Barely a week into my Lenten Journal and I am already missing days.

One of the reasons is good. A longtime friend came to town for a few days and I spent the evenings talking with him instead of writing. But he’s been gone a couple of days and my depression took over responsibility for my absence. These are heavy days for a number of reasons, work in particular, and I am doing what I can.

I am grateful for my interim pastorate in Westbrook for several reasons, but today I am grateful because it gets me back to writing since I have to have a sermon for tomorrow. None of the lectionary passages inspired me so I chose a passage from Luke between last week and next week that is not included in the lectionary cycle: the parables of the mustard seed and the yeast (Luke 13:18-21).

It ended up being a helpful journey for me.

One of the things I love to do is dig around in our vegetable garden. When I say “our,” I’m talking about the plot behind our house, which is adjacent to the church parking lot, where a group from First Church Guilford dig and plant and harvest in our communal garden, which is available for anyone who either wants to work or needs some of what we are growing. Last summer we shared close to three hundred pounds of vegetables with folks fr/om our community and local food banks. And we ate well ourselves. We also grow flowers in the middle of the vegetables not only because they are pretty but also because they are necessary to attract the pollinators that help keep the garden healthy because the garden is a lot like our lives: it is never about one plant; the health of everything depends on everything else. The garden is an incredible web of relationships–just like life.

Tom has been my gardening buddy for the last five summers. My standard line is I put things in the ground and hope for the best, but Tom actually knows what we are doing. I’ve learned a great deal from him over the years. One of the things I’ve learned is that creative is better than perfect. We have beds marked out and we think about where and what we plant from season to season, but it’s not pristine. If a volunteer tomato plant comes up in the middle of the green beans, we just stake it and let it grow. Three or four years ago, he carried around a little container of morning glory seeds and planted them here and there. Each summer since, more and more of them have shown up without us having to plant anything new. They are everywhere.

I thought about those morning glories as I pondered our passage for today.

Right before Jesus told these two parables, people were questioning both his method and his motives. He wasn’t playing by the rules. He didn’t pay attention to the things that good holy people should be doing. To return to my gardening example, they seemed more concerned that the beds were clean and weed free than they were about what was growing in them. Finally, Jesus said, when it comes to the way God works in the world, think of a mustard seed. It’s small, but it grows into something big that gives birds a place to land. Or think about yeast. It only takes a little to leaven “three measures” of flour. (By our measurements today, that would be over four hundred cups of flour. I’m not sure what the woman was baking.)

In both examples, something small has huge implications.

I can’t tell you how many sermons and commentaries on this passage that stayed right there: one small act of kindness (or one seemingly small insult) can make a huge difference. And that’s an important word to live by, but Jesus is never that straightforward in his parables, and he didn’t tell these two stories in response to someone saying the details didn’t matter. In fact, he was responding to people who were incredibly picky about the details. They didn’t think he should have healed a little girl because it was the sabbath and healing counted as working.

Which brings me back to the morning glories in our garden.

The mustard plant Jesus was talking about was as invasive as the morning glories. It didn’t stay in nice neat rows. It blew with the wind. It traveled with the birds who perched on it when it was grown. It persisted in the soil and showed up wherever it wanted to. Though it had some medicinal uses, it was not an essential plant to the people of Jesus’ time. As much as I love seeing the morning glories, I will confess that after three or four summers of their being in the garden they come up in lots of places where we don’t want them to be, and no matter how much we pull them up, they just keep coming.

Jesus’ use of yeast as an example of how the realm of God spreads in the world is the same kind of story. The woman in the story wasn’t tearing open a little package like we get at the grocery store. She had a little mess of fermentation that she added to the flour. The difference in this story is she meant to put the yeast in the flour, whereas no one was planting mustard.

But in the Hebrew scripture, yeast is a symbol of sin. That’s why at Passover Jewish people remove it from their houses and eat unleavened bread. Perhaps Jesus imagined the yeast affecting such a large amount of flour not because the woman ran a bakery or something, but because, once again, he was saying that the Spirit of God runs over, spills out, goes all over the place.

My first memory of the power of yeast happened when I was a boy. As I have told you, I grew up in Africa. My mother decided she was going to make hamburgers, but they didn’t sell hamburger buns in the grocery store in Lusaka, Zambia. So she decided she would make them. She found a recipe in one of her cookbooks and made the dough, but the detail she missed was how much the dough would rise. She made each bun the size she wanted them to be when they were finished cooking. Instead, she ended up with four really big hamburger buns–big enough that she was able to cut one of them into quarters to make the burgers for her, my dad, my brother, and me. What she thought would make four buns fed us for days, which was not something she was expecting.

But then, we are getting a good bit of practice living with the unexpected.

After two years of the pandemic and some hint that we may be coming out from under the worst of it, one of the unexpected things is that we have a lot of reasons to be despondent about the future of the church right now. And when I say we I am speaking about a much larger group than the folks in this room or the members of this congregation. As we look at the days ahead, congregations across this country are unsure of what is going to happen. Many are wondering if they will survive for much longer or wondering if they will recognize themselves in a year or two.

The difficult reality is we don’t know the answers to those questions.

What the parables offer us is hope—an uncomfortable hope, but still hope—and that is that God’s presence in the world will keep showing up like yeast and mustard and morning glories. That presence may not be in the places where we have always found it, and God may not show up in ways that are comfortable. It may mean some things that we value and love will have to run their course for us to see where God is leading us. That’s another way of saying death has to come before resurrection. Sometimes God’s presence will feel nourishing like fresh-baked bread, and sometimes it will feel challenging, like uninvited morning glories, but what these parables say is that the realm of God is coming up all over the place. And Jesus said it as though it was good news and hard news all at the same time.

After he told these parables, one of the disciples asked him how many people would be saved and Jesus told another parable about the wide road and the narrow gate and how few people would choose the narrow gate, as if to say that even though they were drawing big crowds only a few folks would be the ones to catch on to the way God was at work in the world. His analogy makes me think of Elizabeth Barrett Browning’s words:

Earth’s crammed with heaven, and every common bush afire with God. But only [those] who [see take] off [their] shoes; The rest sit round it and pluck blackberries.

Maybe this is a better way to say it: let us choose to be morning glories. Amen.