After my father died last year, Ginger and I were at my mother’s apartment and we saw two or three bags of little white
powdered donuts in the pantry. When we asked about them,my mother said, “Every morning we got up and I made a pot of coffee and we had a couple of donuts and talked about what we were going to have for breakfast.” 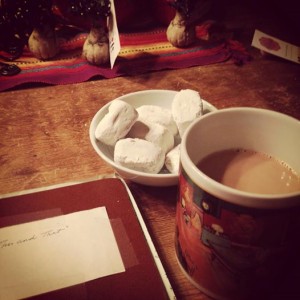 This morning — the first anniversary of my father’s death — Ginger left the house early and returned with two sleeves of little white donuts from our local convenience store. I made a pot of coffee and we, too, ate our don
uts and talked about what we wanted for breakfast. All my food today has been in his memory: cornbread and milk for breakfast, BBQ ribs and sausage for lunch, peach pie for dinner. I remembered him well.

I am the last of three Cunninghams who were given the name Milton. The first, my grandfather, was a big, determined, and sometimes divisive man who died before I was born. I know him only in stories. My dad was a shorter man than his father, more diplomatic, and with a better sense of humor. I split the difference between them, height wise. All three of us bear a physical resemblance along with our common name. I was born in Corpus Christi, Texas. My mom tells of Pop Soles, who was one of the laundry men at the hospital and a member at Second Baptist Church, where my parents attended. Everyday as he made his rounds, he would stop and look through the window at the newborn babies. The morn
ing after I was born he said to the nurse, “I didn’t know Barbara Cunningham had her baby.”

The nurse said, “Now Pop, you can’t tell whose baby is who the first day.”

“Oh, yes I can,” he said. “That is Milton Cunningham right there. I wou
ld put money on it.” The nurse didn’t believe him and went in to check. He was right. I was Milton.

One of the lectionary passages in church today was the story of Jacob wrestling with the angel — or whomever he wrestled that night. The story is one of the most evocative and mysterious stories in the Bible, and one to which I continue to return. I have always loved the idea of taking on a new name when we meet God in a significant way. That part of the story gave me vocabulary to describe why it mattered to me to change my name to Brasher-Cunningham when Ginger and I married. The most compelling part of the story for me, however, is Jacob’s desperate holding on until he got a blessing. The blessing. From his childhood he had manipulated and cheated and cajoled and  there beside the river, aware that come morning he would have to face his brother whom he had so deeply wounded, he hung on for dear life that he might feel blessed. Forgiven. Validated. Loved.

He got the blessing, along with a wound. The man touched him, as the older versions say, in the hollow of his thigh and left him to limp the rest of his life. He had a new gait to accompany his new name. With every twinge came the memory of his blessing. The two were inseparable. His limp, I imagine, also made him recognizable. Someone would look down the road to see the sort of stumble in his walk and say, “There comes Jacob.”

Along with our names and our physical resemblance, the three Miltons have all shared a quest for blessing: some sort of validation that we were enough, that we mattered, that we were worthy to be loved. All of us preached grace better than we appropriated it. When I look at the two who preceded me, I also see that each offered his namesake less of a burden. My grandfather gave his son a better life than he had known; my dad did the same for me. I still remember looking in the coffin a year ago and saying, “Well, Dad, you finally know what it feels like to be enough.” That thought still makes me smile.

My father and I spent more than a couple of nights wrestling with each other as I tried to figure out what it meant to be Milton and we both tried to sort out what it meant to be Miltons together and who we were to each other. We left some scars and we figured some stuff out as well. For most of my life, particularly during my days in Texas, I was often recognized as my father’s son before I even had a chance to introduce myself. Sometimes that opened doors and sometimes it annoyed me. It never closed a door. It often led to a story: “I remember when your dad was here . . . .”

I’m a marked man: marked by my name, by my appearance, and by the legacy of my father who did the best he could. Part of grief appears to be coming to terms with the fact that the things you hoped might happen will not. Marking this day, however, reminds me of the ways I am marked by him; even as I miss him being here, I feel him in my limp, if you will — I incarnate the legacy handed down to me in the way I look, the way I repeat stories, the way I look for humor, the way I love to read, the way I feel called to make a difference in the world, the way I love a good piece of pie.

I am blessed, and I will keep my name. I am Milton.