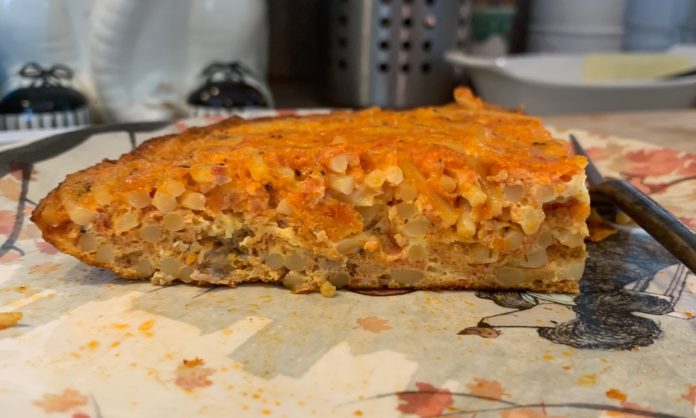 Order an entree from an Italian restaurant in New England and it will come with a side of pasta.

I don’t mean the entree will be served over pasta. That’s a pasta dish. I mean any entree comes with a side of pasta. Night before last, we ordered from Centro Pizza, one of our regular haunts here in Guilford. Ginger got her usual, Tri-colored Tortellini with Alfredo Sauce, and I ordered a dish I had not had before, Chicken Breast Rollatini, which was a flattened chicken breast rolled and stuffed with spinach, mozzarella, and gorgonzola, with a mushroom sauce. My side of pasta–spaghetti with tomato sauce–was in a separate container. Because I didn’t want to forget the taste of the mushroom sauce and it was way too much food for one sitting, I put the pasta in the fridge to be a part of a meal to be named later.

One of the things I learned how to make soon after we moved to Boston almost thirty years ago was a frittata, which is an Italian word that ought to mean “here’s what we did with the leftovers.” Some people describe it as an Italian omelet, but I think that sells it short. The name comes from the Italian verb friggere, which means “to fry.” Another etymology says it means something like a mess, or even someone who is a little bit unhinged.

When I stumbled across this recipe for a Pasta Frittata, it seemed just crazy enough to work. Now, to say “recipe for a frittata” is a bit of a stretch. Yes, this is one, but once you get the hang of it you can make a frittata out of whatever is in your fridge and some eggs. You beat the eggs, add the stuff, oil a pan, start it cooking, throw it in the oven, and frittata!

Beat the eggs in a large bowl. Add the cheese. Chop up the leftover pasta. Since mine already had the sauce mixed in, I left it that way. Add the pasta and the sausage to the egg and cheese mixture.

Heat a large nonstick ovenproof 10-inch skillet to medium high and melt butter or oil. Pour the egg mixture into the skillet and turn the heat down to medium-low. You can even out top of frittata with a spatula or spoon. Let it cook on the stovetop until the mixture begins to firm up around the edges and then transfer it to the oven. Bake just until top is set, about 10 or 12 minutes. Remove, and serve it hot or at room temperature.

*NOTE: The recipe I found also gave instructions for cooking pasta to make a frittata. Cook 1/4 pound of linguine, fettuccine or other long pasta. Bring a large pot of water to a boil, and salt it. Cook pasta until barely tender, somewhat short of where you would normally cook it. Drain, and immediately toss it in a wide bowl with 2 tablespoons the butter or oil (which would bring the total for the recipe to 4). Cool it a bit. The recipe also gave instructions if you wanted to add bacon or pancetta that had not been cooked: If you are using meat, add it, and cook, stirring occasionally until crisp, 3 to 5 minutes.

a tale of two scones