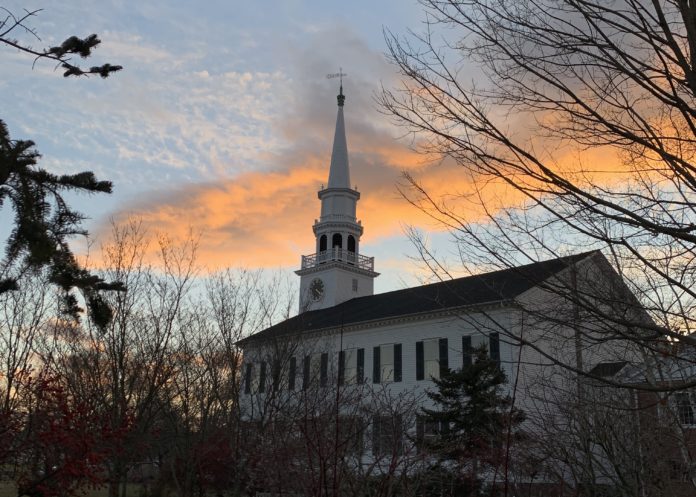 I know. I haven’t been here in a while.

I’ve missed it. And I’m working to change that pattern for the days ahead. I’ll start with my sermon for today. I am preaching in two places this morning: remotely at United Churches of Durham CT and in person at First Congregational Church of Guilford, which was also recorded earlier in the week since not everyone can get into the sanctuary. Here is what I had to say.

Back in the days of Blockbuster Video and VHS tapes, Ginger and our friend Cherry rented the movie Casino. It was so long that it took two tapes. They popped one in the VCR and were a little puzzled that the movie just started without any titles or credits, but they chalked it up to Martin Scorsese being a creative director. Still some things didn’t make sense. When they got to the end of the tape and the final credits began to roll, they realized they had started in the middle of the movie.

Our lectionary passage this morning is the beginning of the second tape, as far as the story of the Hebrew people goes. It will make more sense if we give it a larger context. The Book of Exodus is telling the story of how the Hebrews became a people, a nation, and a community of faith. It is also the story of their learning to live in relationship to God in new ways. It began with their Exodus from Egypt. Then the wandered in the wilderness of the Sinai Peninsula for forty years.

In one of the early chapters of this story, the people complained because they didn’t have enough to eat. No–they didn’t just complain. They whined. “Why did God bring us out here to die? We would be better off back in Egypt.”

In response, God rained bread every morning like dew–manna–which inspired our hymn for today: “Morning by morning, new mercies I see.” In the evening quail flew into the camp and just sat there. Though this part of the story is told only once, the food supply chain was never broken. I want you to remember that the meals didn’t stop for forty years. Hang on to that detail.

One more piece of this prelude: the chapter of the story we are reading today begins with Moses going up the mountain to get the Ten Commandments. He was gone so long that the people began to think he was never coming back and they got anxious. Their pleading makes me think of the line from the chorus of John Prine’s “Angel from Montgomery”—“. . . just give me one thing that I can hold on to.”

So they melted all their jewelry and built a Golden Calf to give them that one thing: something they could see and touch—a god they could grasp. Moses came down the mountain with the Tablets, saw the calf, got mad, threw down the tablets and broke them, and then burned the calf to ashes, mixed the ashes with water, and made the people swallow the consequences of their actions. Moses was mad, God was mad, and they people were distraught.

The Hebrew people, as I said, were in the process of becoming a people. They had spent generations in Egypt being defined by who they were not and as they physically wandered in the Sinai, they were spiritually wandering as well, trying to figure out who they were. To see themselves as God’s people meant they had to come to terms with God. For all the parted seas and giant gestures of deliverance, the Hebrews lived with a basic insecurity that God was not going to hang around. They wanted constant reassurance. They wanted a god they could touch, a god they could understand. Rabbi Jonathan Sacks says,
“We now understand the entire drama set in motion by the making of the Golden Calf. Moses pleaded with God to come closer to the people, so that they would encounter [God] not only at unrepeatable moments in the form of miracles but regularly, on a daily basis, and not only as a force that threatens to obliterate all it touches but as a Presence that can be sensed in the heart of the camp.”

In the aftermath of the Golden Calf, Moses pitched his tent outside the camp. Both he and God kept their distance from the people, who wanted presence most of all, but didn’t know how to ask for it. From the camp, they could see that God came to Moses in the form of a “pillar of cloud, and that Moses and God were in conversation in a way the people had not experienced: it gave the appearance of two old friends talking.

Moses was a man acquainted with powerful revelation. God first spoke to him through a burning bush that never burned up. When Moses raised his arms, the sea parted and the people escaped Egypt. The Torah records more than one conversation between God and Moses where Moses bargains with God. In this passage, Moses asks to see God face to face and God says,

See, there is a place by me where you shall stand on the rock; and while my glory passes by I will put you in a cleft of the rock, and I will cover you with my hand until I have passed by; then I will take away my hand, and you shall see my back; but my face shall not be seen.

I want to go back to the detail I asked you to hold on to earlier: the manna and quail had never stopped. Morning my morning, God had showed up and the new mercies had continued, but Moses and the Hebrew people had lost sight of them somehow.

The Hebrew people wandered for forty years across an area about the size of the state of Maine. When they left Egypt, they thought, I’m sure, that everything was going to be okay. They were freed from their enslavement. God was with them. But it was just the beginning. What they thought would end quickly dragged on for generations. They didn’t know when it was going to end. They didn’t know what to expect. They built the golden calf so they could have a deity they grasp. They wanted a quantifiable life and a quantifiable god. They wanted certainty. They wanted another grand gesture on God’s part to give them a sense of presence and what they got was breakfast every morning.

In one of my favorite movies, Miss Firecracker, Carnelle Scott is a woman who is well-acquainted with grief and tragedy, and who is also in the last year of her eligibility for the Miss Firecracker Contest in Yazoo City, Mississippi. Her cousin Elain had won it years before when Carnelle was a child, and Carnelle is sure she can do the same and that winning the title will change everything. She places fifth.

Later, she says to Mac Sam, the come-and-go love of her life, and also one of her biggest encouragers, “I just want to know what I can reasonably expect out of life.”

“Not much,” he answers, laughing and coughing at the same time.

“But something,” she persists.

We are wandering into the eighth month of distance and isolation connected to COVID-19. In many ways, we are less sure about when this will be over than ever. We are a little over two weeks away from an election that will answer some questions but leave much of our cultural turmoil and division still in play. We are struggling to deepen and widen our understanding of what it means to be a people as we come try to come to terms with the structural racism and bigotry baked into our systems. We, too, want some certainty about what is coming next. We, too, pin our hopes too easily on grand gestures. We, too, want to know what we can reasonably expect out of life.

But, like, the Hebrew people, we will find our hope and our humanity in the small merices. We find our faith in the stories we tell that give us a sense of God’s presence, not in a full-on, in your face kind of way, but in how we remember what God has done in our midst. The cliché says that the devil is in the details. No. That’s where God is.

Micah 6:8 is a verse we quote often: “What does the Lord require of you but to do justice, love kindness, and walk humbly with God.” The oldest translations read “love mercy” instead of “love kindness.” The manna on the ground each day was an offering of God’s kindness. With that in mind, listen to Naomi Shihab Nye’s poem, “Kindness”

Before you know what kindness really is
you must lose things,
feel the future dissolve in a moment
like salt in a weakened broth.
What you held in your hand,
what you counted and carefully saved,
all this must go so you know
how desolate the landscape can be
between the regions of kindness.
How you ride and ride
thinking the bus will never stop,
the passengers eating maize and chicken
will stare out the window forever.

Before you learn the tender gravity of kindness
you must travel where the Indian in a white poncho
lies dead by the side of the road.
You must see how this could be you,
how he too was someone
who journeyed through the night with plans
and the simple breath that kept him alive.

Before you know kindness as the deepest thing inside,
you must know sorrow as the other deepest thing.
You must wake up with sorrow.
You must speak to it till your voice
catches the thread of all sorrows
and you see the size of the cloth.
Then it is only kindness that makes sense anymore,
only kindness that ties your shoes
and sends you out into the day to gaze at bread,
only kindness that raises its head
from the crowd of the world to say
It is I you have been looking for,
and then goes with you everywhere
like a shadow or a friend.

In the messy details of our lives, in our hunger for assurance, in our trust that we are held by eternal grace, and in all that is uncertain about what lies ahead, our daily kindnesses are our best reminder of God presence and our connectedness. Morning by morning. Evening by evening. Sorrow by sorrow. New mercies we see—day by day by day by day by day. Amen.