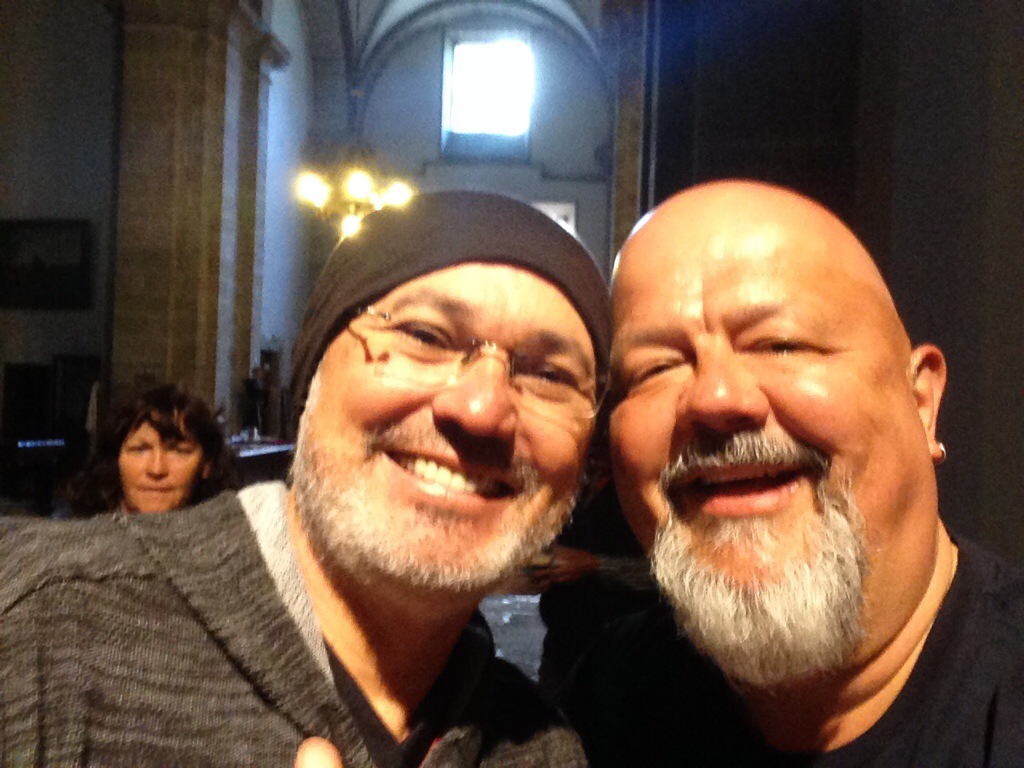 Though we stood on the stone with the shell engraved on Saturday afternoon, we got up Sunday morning and kept walking. There was much to do. We tramped up and down the old stone streets to get our certificate of completion at the Credentialing Office and then to get a second certificate at the Church of Saint Francis (on the other side of the cathedral) because this is the eight hundredth anniversary of his walking the Camino. Of course, it felt uphill both ways. We found time for a cafe con leche and then met Vanessa and Mike back in the square where we were introduced to Margarina (mar-gar-eenya) who gave us a tour of the old city. A walking tour.

The giant cathedral is flanked by four squares and each squared bordered by more giant buildings: a seminary, a convent, buildings once hospitals that are now hotels, residences, administrative buildings, even other churches. As we were getting ready to walk, the main plaza began filling up with random groups, the largest being a group of pilgrims with Parkinson’s disease, complete with bagpipes, who were finishing their walk. Their emotion and resolve radiated across the square. Margarina said, “Bagpipes,” and smiled and began to tell the story of how Santiago became a city.

James is said to have come to Spain seeking to live out Jesus’ command to go to the ends of the earth. Fisterra, which means that very thing, is a small coastal town, so James went to the end and then returned to Jerusalem. When he died, two of his disciples, Theodore and Anastasio, brought his bones by boat back to where Santiago is now and buried them at the end of the first century. To make a long legend shorter, fast forward to somewhere in the ninth century (past holy wars and one destroyed cathedral), and the graves, which had been lost and forgotten, were discovered by a priest who followed falling stars to find them, thus the town is called Santiago de Compostella — James of the Field of Stars.

I love a good star story. And a good star song — “Stars” by Dan Fogelberg, “Vincent” by Don McLean, “Stars Go Blue” by Ryan Adams, “Bright Morning Star” by the Wailin” Jennys, to name a few. Perhaps the one at the top of my list is “Look At All The Stars” by Bill Mallonee, which is a song about his father and is full of grief and wonder.

Whether it is contemplating the stars or simply standing in the square put in your place by the scope and majesty of the big stone buildings, there is much in Santiago to give you a sense of appropriate insignificance. The shell and the star are the two primary symbols of the Camino, one small enough to hold, one large enough to see across time. Together they offer the paradox that we belong in this world and we are almost unnoticeable in the grand scheme. In one of my earlier Camino posts, I included a picture of Ginger and me sitting on a stone wall in front of what we called a storybook forest. I was trying to take the picture when a man showed up out of nowhere and said, “I take picture,” which he did and then went on his way. As I was coming out of the small office in the front of the St. Francis Church, I recognized the man as he was going in. I took my phone out of my pocket, found the picture, and went back into the little room. He was about to sit down to get his certificate when I touched his shoulder and said, “You took this picture.”

“I remember,” he answered and then he turned and embraced me. “Thank you.”

As the priest looked on as though to say, “There are others in line,” I flipped the camera around and took a picture of us both, grinning. “Thank you,” I said. “Buen Camino,” and walked back down to the plaza to learn about the one hundred and ten bells, the oldest clock, the four squares, the thirty-three steps up to the statue of St. James in the middle of the altar, and the nearly one hundred and fifty pound botafumeiro (incensory) that swung across the church at the end of the service. The power of ritual — of meaningful repetition — is to call us to a new sense of our faith and of ourselves.

For our last supper in Santiago, Ginger and I walked from our hotel down what had become a rather familiar route along the slope of the old stone streets to Cafe Cervantes because of the name. He is one of my writing heroes and here was a cafe named after him. Easy call. None of the servers spoke much English and when the food came I had managed to order a bottle of wine rather than a glass. Not long after we sat down, two men sat at the table next to us. Since we could hear them speaking English, we struck up a conversation. One was from Vancouver and the other from Kent, England. Both had walked from the beginning of the Camino in France and it had taken them over forty-five days to get to Santiago. They met on the trail and had traveled together. Since we had an abundance, we shared our wine and we all told our stories.

We asked each other what the trip had meant and all of us said in our own ways that the trip was not life changing in the sense there was some Grand Epiphany that will send us home fundamentally different from who we were at the start, and yet it was life changing. The Canadian man told me he the longer he walked the more he thought about how to be more compassionate when he got back home. “What I hear in what your saying is we made the long journey one step at a time; the best way to be compassionate is one small gesture, one word at a time. There aren’t many grand gestures of eternal significance,” I replied.