I can’t claim to know very much about jazz. I did see Miles Davis perform once—and he played the entire show without ever speaking to the audience. He did speak on other occasions and said things like this: 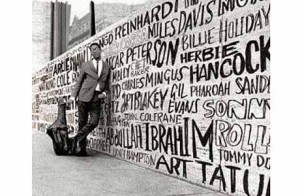 Sometimes you have to play a long time to be able to play like yourself.

One night long ago I was with my friend Billy in Manhattan and we saw a flyer that said Toots Thielemans, McCoy Tyner, and Stanley Clarke were playing in a club called Fat Tuesdays; Billy said we had to go. It was years before I understood what I had been a part of that night. It was amazing.Over time I’ve learned a bit here and there. I love to hear Thelonious Monk play “Abide With Me” or Dave Brubeck “Take Five.” I have owned a few records by Charlie Parker, Duke Ellington, and Charles Mingus, but I don’t know the terrain as well as several of my friends.

What I does grab me is the spirit of jazz: the improvisation, the trust, the abandon. The parallel for me is improvisational comedy in the sense that both require a great deal of preparation for what they don’t expect. I saw Wayne Brady several years ago. His performance began with one of his staff coming out a few minutes before the show with a flip chart and a magic marker. He asked for forty words from the audience. As we shouted things out he wrote them down, one to a page. When he was finished, the drummer began playing a rap rhythm and Brady entered and began to freestyle as his staff member flipped the pages revealing the words we had written one by one. Brady never missed a beat. He had never seen the words before, but he had prepared. He knew how to trust himself, to step into the moment, to give it everything he had, so he made it look easy.

Anyone can make the simple complicated. Creativity is making the complicated simple — Charles Mingus

Good jazz musicians are so steeped in the basics that they are ready to not only respond to the unexpected, but to welcome it, in large part because they are good listeners. They are paying attention to what those around them are doing, listening to the invitations coming their way and responding with offerings of their own. Improv, at its best, is not about “It’s my turn” as much as “here’s what I can contribute.”

The most important thing I look for in a musician is whether he knows how to listen. — Duke Ellington

Jesus would have been a great jazz guy because improv was his lifestyle. I’ve been reading through the gospel of Mark and noticing once again how much of what Jesus does happens in the context of interruptions. He didn’t meet the disciples for breakfast to have them say, “So, at nine we need to be at the gate to heal the blind man, then there’s a leper at ten, you have a bit of free time until we feed the five thousand at noon, then we’ll scoot across the lake for your afternoon sermon, and then you’ll spot Zacchaeus in the tree and go to his house for dinner. Oh—and on the way a woman will touch your cloak and she’ll be healed.” Instead, he set out each morning listening to the day, to the disciples, to those he bumped into, to those who followed or gathered around, and then he responded to what he saw and heard. When their encounter was over, they were changed by the melody he offered them.

It’s the group sound that’s important, even when you’re playing a solo. You not only have to know your own instrument, you must know the others and how to back them up at all times. That’s jazz. — Oscar Peterson

That’s faith—life, too: “you must know the others and how to back them up at all times.” I think of the solo performances I saw today: the person who took my order at lunch, Ginger sitting next to me at the coffee shop as we worked on separate projects, my brother calling to catch up on life, the guy at the Costco pharmacy who somehow manages to remember my name—along with everyone else in line. How did I back them up? How did I honor their moment? I’m not speaking of some sort of grand gesture. Was I attentive? Was I present? Did they know I was listening?

Jesus leaned hard on the privileged people of his day to pay attention to the poor. When the woman broke the alabaster jar on poured perfume on Jesus’ feet, they went ballistic. Did he have any idea how much money was wasted? He just smiled and asked if they could hear the melody of her heart enough to back her up.

The memory of things gone is important to a jazz musician. Things like old folks singing in the moonlight in the back yard on a hot night or something said long ago. — Louis Armstrong

Our faith leans hard into the past. The writer of Hebrews said faith was “the evidence of things hoped for, the substance of things not seen,” but that future is tethered to the great cloud of witnesses who have already walked this planet and have stacked up stones to remind us to keep telling the stories. When we pass the bread and cup, we do so with all of those who have come before us. Just as we back one another up in this life, we must also keep reminding ourselves that the band, if you will, has been playing for far longer than our part of the song. To remember is to also embrace the grief over what and who have been lost. Those days are gone. Those people are gone. We are here. Together.

abide with me; fast falls the eventide;
the darkness deepens; Lord, with me abide;
when other helpers fail and comforts flee,
help of the helpless, oh, abide with me.