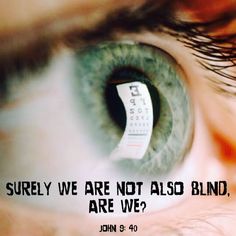 I know. It’s Tuesday. Suffice it to say there has been a lot going on.

I’m still looking at sight and the way Jesus healed blind people. Bruce Corley was one of my New Testament professors in seminary. I loved his classes. He began our discussion of Jesus’ miracles by saying we should read them as “parables in event,” which meant we had to learn to look at the context within which they happened. The reason Jesus told parables was someone asked a question or made a statement and then he would look at them for a couple of minutes and say, “A certain man had two sons . . . .” The miracles happen in like fashion. The events or conversations before the miracles set the stage. After Jesus healed the blind man in John 9, those around him asked, “Surely we are not blind, are we?”

Jesus answered, “Say it with me: we are blind people.” (my paraphrase)

Look at Mark 10. The religious leaders tried to get him caught up in a theological trap around questions of divorce. Jesus refused to bite. In the meantime, a bunch of little kids came running up and the adults tried to shoo them away. Once again, Jesus responded differently, welcoming the children with open arms and talking about the last being first. Then the one we know as the rich young ruler showed up looking for validation for his philanthropic lifestyle and Jesus told him discipleship would cost him everything. Later on, Jesus and the disciples hit the road to Jericho and he tried to tell them about his impending death, but that mostly lead to a discussion of which one he liked best. In all three situations, the folks around Jesus couldn’t see what was going on. Then he restored sight to a blind man. Like Corley said, a parable in event. A chance for new eyes. No one, it seemed, could see what really mattered.

I’ve become aware that I have quit listening to the news almost completely. I peruse the New York Times online and see some of the articles friends post on Facebook, but I have turned off NPR in the car, for the most part, and I long since gave up on anything passing for news on television. I have discovered I am no less informed because most of what fills the airways is not news, if that word means “new information.” It is opinion, it is repetition, it is white noise, but it is mostly not news. And when there is news, it is offered selectively. We know, for instance about tragedies in London or any US city, but our vision is hardly ever directed toward car bombs in Baghdad or Kabul or Mosul or anywhere nonwhite.

Our government and our media do not ask us to see clearly. They keep offering distractions—shiny objects, early morning tweets, incendiary analyses—as the normal view from here, but there is nothing to see that matters. We are left to see life as a whirlwind of activity and chaos that is out of control. We are told to look at life and be afraid. Very, very afraid.

When someone asked about divorce, Jesus talked about commitment. When someone said the children were a nuisance, Jesus laughed at the hopeful abandon of the little ones and said we should be more like them. When the rich young man wanted to focus on his generosity, Jesus offered a look at even greater sacrifice. When the disciples jockeyed for position, Jesus invited them to his magnificent defeat. When we allow our field of vision to be filled with images fed to us by those who are driven by power and greed and who understand the more they keep us divided and frightened the less we will ever be able to see our common humanity, we are hopeless, lonely beggars each left to fend for themselves. I can’t afford to see you; it’s all about me. That kind of frightened self-focus may get you elected president, but it will not let you see how God’s love is at work in our world, even in the midst of all the pain and sorrow.

Let us see a bigger picture. Let us remember we are not the primary characters in this drama called life, and by we I mean Americans. We are not the most important nation on the planet. Look—no other country feels compelled to shout, “We’re Number One” at every opportunity. We are not indispensable to human history. We have done some amazing things. We have also done some horrible things. We have not been on the human stage for even half a millennium. We are flash in the pan of history. We are the squeaky wheel of the present age, always expecting to get the grease. Look—we are one nation among all the others. Our lives are not more important than theirs. Our deaths are not more important than theirs.

Let us see a smaller picture. Let us notice one another as more than extras in our movie. I have challenged myself to not have my phone out when I am walking in Manhattan. I have learned my way around pretty well—at least in my little section of town—so I try to walk with my head up rather than my eyes down in my phone. Yesterday I saw four people, two women and two men, trying to get at least that many suitcases through a small door that led to walk up apartments. It looked it was a mother and father who had come to visit their children. The door had a spring on it so it would slam shut as soon as someone entered. All of them were crammed into the entryway. I happened to be looking up. I stopped and took the outside door handle and just held the door open. “You look like you could use some help,” I said. The young man smiled. The old woman, too. They got inside with all their bags and I let the door close. It was not my movie, but I got credit as “Man Holding Door” because I wasn’t staring into a screen. Would that I were awake enough to show up for all the parts offered me.

Not everyone who yells, “Look here” actually wants you to see something that matters. We are being blinded by an onslaught of fear mongering. Say it with me: we are blind people.

Jesus, have mercy on us.