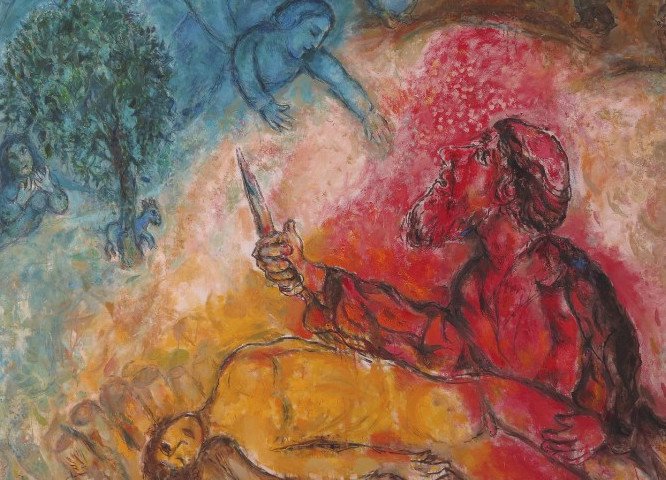 I was a high school English teacher for a number of years. When I had to be out of the classroom, I tried to leave lesson plans for the substitute that were easy to implement. I was not so lucky with this morning’s sermon. Our passage today from Genesis 22, often referred to as “The Binding of Isaac,” is a difficult and problematic story. Let us see what we can find there together.

As I have read through this passage over the last couple of weeks, I have seen different things. This has never been an easy story for me. First, I have questions about Abraham. Here is a guy who questioned and bargained and argued with God all along the way in his life, and yet, when God told him to take Isaac up the mountain and kill him, Abraham just went without explaining himself to anyone, and particularly not to Isaac.

I also have questions about what the story says about God. I understand that, even though we talk about the Bible as though it were a cohesive unit, it is actually a collection of literature from a variety of sources collected over thousands of years, so the picture of God is not one that has been systematically thought out; there are layers and changes, even contradictions—and we are dealing with one of the oldest and earliest stories, where the picture of God is just beginning to be sketched.

I also understand we are not reading a journalistic account what happened on Mount Moriah. The stories of Genesis—the origin stories of the Hebrew people and the Jewish faith—were written down much later—after the Exodus—to explain who they were, how they got there, and why that mattered. Since our faith grew out of theirs, we lean into these stories to find our place, yet we read them differently because our story spins off from theirs. As I read Jewish interpretations of the story, which is called the Akedah in Hebrew—the binding—I found these words from Rabbi Rachel Barenblatt, who says the difficult thing about this story is the fact that it can be interpreted in a number of ways.

We don’t know which interpretation is right, or which is true. It seems unfair, somehow, that the Torah—which is supposed to provide guidance, to help us live sanctified lives— is so unclear on this. The story is there, but Torah doesn’t tell us what to make of it. So where do we go?

One place to go from here is up.

Imagine a tower that stretches infinitely high into the heavens. Inside the tower is a spiral staircase, with landings on every floor; at each landing, there’s a window. The view from the lowest window is different from the view on the fifth floor, or the tenth, or the hundredth. As we climb the stairs and pause at the different levels, we see new things. Where on the ground floor we saw earth and stones, from the tenth floor we can gaze out over the landscape. After a long while we see stars. Maybe even galaxies. Eventually something vaster than we can imagine. . . . The view is different from different landings, but that view is always God. . . . What changes, as we work to ascend that tower, is us. As we ascend we become able to see more of God . . . but God is fully there on every floor. . . . Depending on what window we’re looking through, we’ll find different things in the story of the Akedah. Maybe it’s ambiguous for a reason: because the process of studying it is itself a way of learning to see God in difficult places.

The window I keep looking through in this story is wondering what it felt like to be Isaac. We have no indication of how old he was. The assumption, for most, has been that he was a child, but we have no detail in the story that supports that. He could have been a young man. Either way, he follows his father to the foot of the mountain, and then up the slope, after they leave their servants behind. He even carries the wood on his back. He never says a word as his father ties him to the altar; never asks a question, doesn’t speak up after it is all over—or at least, the writers never give him a voice.

Isaac is, it seems, a victim of the will of God. Abraham is convinced God has commanded him to kill his son—the one who is the human confirmation of God’s promise to make Abraham’s descendants as numerous as the stars. Isaac was not in on the conversation. He was not given a say in his future, or his present. Abraham did nothing to offer Isaac a view from his window; instead he just bound him up and tied him to the altar.

Part of what is hard for us to understand in the story is the whole idea of sacrifice, which was a significant part of not only Hebrew life, but most ancient religions: most everyone thought that their gods were appeased, if not pleased, when something was killed as an offering. We don’t have enough time to unpack all the theological ramifications of how the idea of sacrifice has influenced how we see God and see one another today, even though our ancestors in the faith quit making burnt offerings long ago. And I would like to name that we can too easily let ourselves offer up someone else so we can feel safer or more prosperous at their expense.

When I look at Isaac, I see those we have come to call the Dreamers in our country—young people who came here with their parents from other countries, who are now being told their days here are numbered. I see transgender people who are being told they don’t belong because they don’t fit into traditional categories. I see people who are blamed for being born into generations of poverty, as though the things that bind them are somehow their fault. I see people who live with mental illness. People who are on the receiving end of the physical, verbal, and systemic violence of racism.

And I listen to the voices of those who say these people need to be sacrificed for the “good” of the greater society and it breaks my heart that, far too often, they make that claim in the name of God.

Abraham never questions what he thinks God is telling him to do, though he does in most of their other interactions. We are not told what Abraham was feeling or thinking, but something made him move unquestioningly, convinced he was doing the right thing, all the way to raising the knife to kill his son. At the last moment, an angel cries out, “Do not lay your hand on the boy or do anything to him!”

Perhaps one of the things we can take away from this story is when we come to those moments in life where we are dead certain God is on our side, that God has told us the truth—particulary when that truth does damage to another so we can get what we think has been promised to us—we may need to listen harder, to look for the ram in the thicket, if you will. We need to listen for the voice shouting, “Don’t lay your hand on them!”

Or, perhaps, we need to be that voice.

In his book, Just Mercy, Bryan Stevenson tells of his work with people who have been wrongly incarcerated in Alabama. He founded the Equal Justice Initiative to give hope and voice to those bound up by our unjust system of mass incarceration. Towards the end of the book, he talks about meeting a woman he met who came to the courthouse everyday to help people. Part of what she said was,

Stevenson said later that evening he was speaking to a church group and referenced the story from John 8 where a crowd of men bring a woman to Jesus, saying the caught her in the act of adultery and that she deserved to be stoned to death. Though it takes two to commit adultery, the men had bound her up as the one responsible so they could enforce their view of God’s will, which left them unscathed and in charge. They were armed and ready. Stevenson continues,

I . . . reminded people that when the woman accused of adultery was brought to Jesus, he told the accusers who wanted to stone her to death, “Let he who is without sin cast the first stone.” The woman’s accusers retreated, and Jesus forgave her and urged her to sin no more. But today our self-righteousness, our fear, and our anger have caused the Christians to hurl stones at the people who fall down, even when we know we should forgive or show compassion. I told the congregation that we can’t simply watch that happen. I told them we have to be stonecatchers. (108-9)

From my window on the story, I can’t explain why God told Abraham to take his son up the mountain. I can’t explain why Abraham went, or what he thought he was doing in the name of God. But, from my window on the story, I see Isaac, bound and helpless, and I know that had not the angel cried out, “Do not lay your hand on the boy or do anything to him,” Isaac would have been killed.

If Abraham had been left to do what he thought God wanted him to do, Isaac would have been murdered and Abraham would have thought he had done God’s will. But that is not what happened. But Abraham heard a different voice, saw God in a new way, and Isaac and his father came down the mountain together. Isaac lived because the angel spoke up.

The ones who most often make the news speaking for God keep saying that God is demanding the sacrifice of those on the margins so the privileged can continue to prosper. God needs others —God needs us—to speak up, to shout, “Don’t lay a hand on them.” In big ways and in small ways, God needs us to be stonecatchers, to offer life and love and hope to those bound up and unable to free themselves. We may not make the news, but have to do more than just watch from our window. Amen.