Two months. I know. That’s how long it’s been since I last wrote here. I have looked hard at why I have been absent. Some of it was finishing up my next book (which comes out in November); some has been schedule; I think the main reason is as I work to deal with the grief of leaving Durham in about four weeks staying silent has allowed me to keep some of the feelings at bay. To write down what is going on requires me to engage my life on a different level. And it is time to do so. I promise to show up here more regularly in the days ahead. There is much to say.

I want to start with a story I have intended to tell for some time.

In the early nineties I was teaching English at Charlestown High School in Boston and had the good fortune to be doing so when Bill Moyers did his first PBS poetry series, The Language of Life. I was mesmerized by the words and the wordsmiths he interviewed: Coleman Barks reading Rumi, Sekou Soundiata, Jimmy Santiago Baca, Robert Bly, and Naomi Shihab Nye. One of Nye’s poems stuck to me and has never really let go, becoming a personal scripture in a way, a text that has helped me remember who I am and who I want to be. The poem is called “Famous.” If you have read this blog over the years, then you have read it several times, but here it is once more.

The river is famous to the fish.

The loud voice is famous to silence,
which knew it would inherit the earth
before anybody said so.

The cat sleeping on the fence is famous to the birds
watching him from the birdhouse.

The tear is famous, briefly, to the cheek.

The boot is famous to the earth,
more famous than the dress shoe,
which is famous only to floors.

I want to be famous to shuffling men
who smile while crossing streets,
sticky children in grocery lines,
famous as the one who smiled back.

I want to be famous in the way a pulley is famous,
or a buttonhole, not because it did anything spectacular,
but because it never forgot what it could do.

Leave the poem for a moment and come with me to a coffee shop — our coffee shop here in our neighborhood of Old North Durham, which I have also mentioned quite often in my writings here: Cocoa Cinnamon. The repurposed service station at the corner of Foster and West Geer streets is like a participatory art installation brought to life by our friends Areli and Leon who started with a Coffee Bike and worked and dreamed and gathered and invited until the shop came into being. I decided I would make a cookie for their opening day, so I created a Cocoa Cinnamon Cookie: a chocolate chip cookie with espresso powder in the dough and some Heath toffee bits that is then rolled in sugar mixed with coffee, cinnamon, and cayenne pepper. I took about four dozen cookies to them to help celebrate the new café and use them however they wished. A couple of days later, Leon asked if I would start baking them so they could sell them at the shop, which is how I became an intentional cookie baker rather than an occasional one. A couple of days later I stopped by the shop to sip and write and saw my cookies in the display case with the label, “Milton’s Famous Cookies.” I smiled and Leon said, “Well, they are famous here.”

And I thought of the poem: the cookie is famous to the hungry person in the coffee shop.

Over time I have worked on other recipes that I have boxed up and taken down to the shop — Milton’s Ginger (ginger-molasses), Double Chocolate Olive Oil and Sea Salt, Curry On (a curried sugar cookie with apricots and coconut), Peanut Butter Chocolate Chip and Sriracha — and then this past spring I made it official and started my own business. When it came time to name it, the choice felt obvious: Milton’s Famous. When you live in The Most Encouraging City In The World, how things come together is a communal act. Mark, one of our Thursday Night Dinner regulars who happens to be a graphic designer, created the logo and helped me learn about branding. Areli and Leon took the big box off the coffee bike and Andrew, another neighbor who happens to be a metal sculptor, built a table so I could be mobile and thus get a place alongside of the food trucks at the Hunt Street Art and Food Market every Saturday (which also happened because of Becky and Mike, who own the Pie Pushers truck). Lindsey and Rob, who own Monuts (our awesome donut shop), rented their kitchen space in off hours so we could do the volume we needed, Laura has baked and sold cookies with me all summer long, and Ginger has been unfailingly supportive and encouraging at every turn.

We were about three Saturdays in to our new adventure when I had to miss a week to with Ginger to Guilford, Connecticut where she was called to be one of the pastors there. Both things have felt like the right things to do. Even as we are packing up and preparing to head North, I’m still baking and riding the bike down to the Market on Saturdays, and I will continue to do so until we leave town. More and more frequently people ask me what is going to happen to the cookies when we leave. What we have figured out is Laura will keep baking and making sure there are cookies at Cocoa Cinnamon. We’re going to take a break from the market starting in November, which will give us time to plan how to be back there next Spring. And I will go to Guilford and find a place to bake there as well. What I love about it is how it makes me feel connected — to the people who have helped make it happen, to the people who buy the cookies — and the way it reminds me who I am and that I am loved. 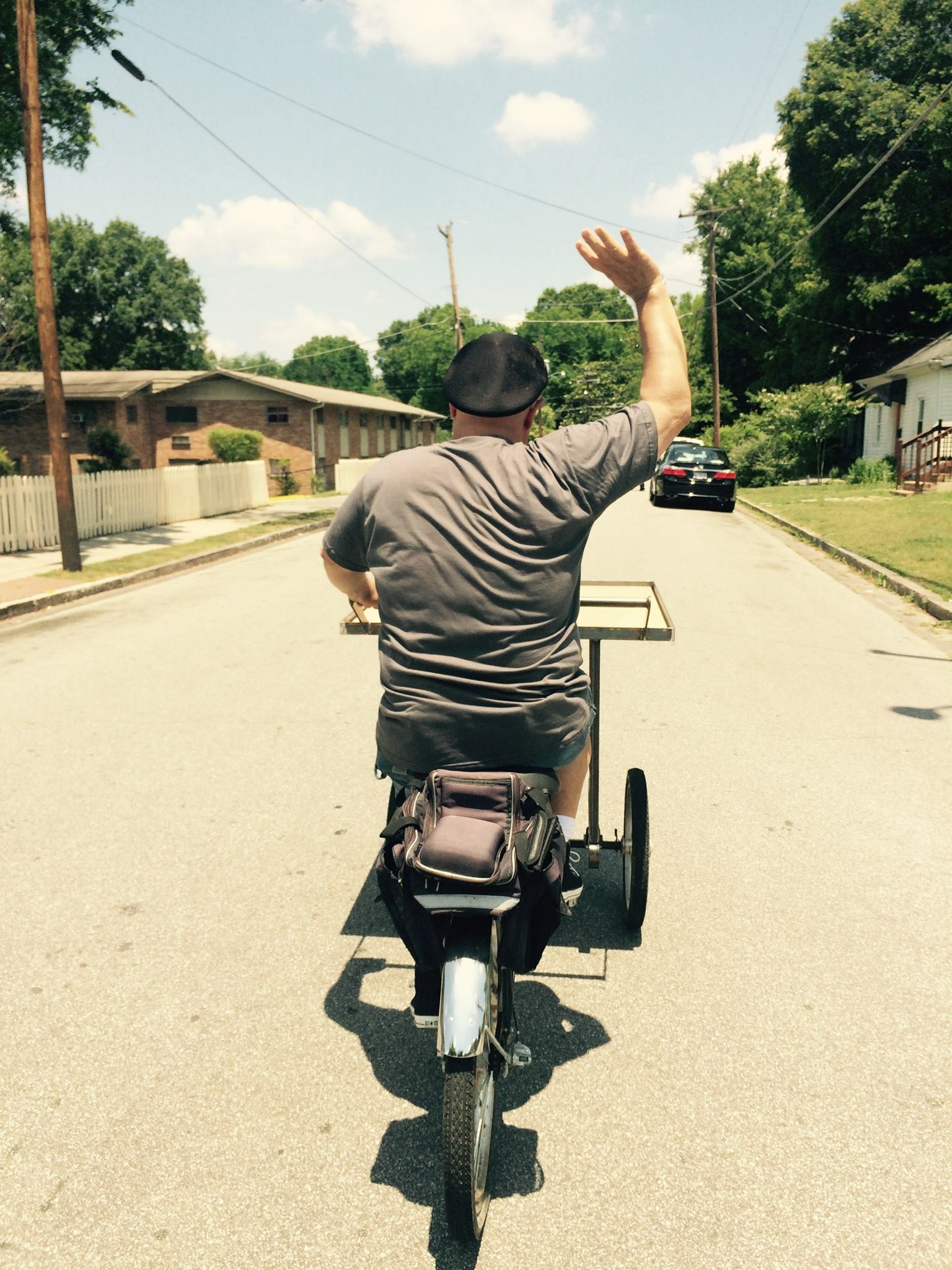 The other night I had to stop at Whole Foods on my way home from work at the computer store. It was late and I was tired, so I meandered through the store, retracing my steps more than once as I remembered why I had gone in there in the first place. I passed a woman and her two daughters who looked like they were about ten and six. Th
e older one smiled at me, and then smiled again as I passed them on the next aisle, and the next. I wandered to the far end of the store and then came back to the produce section to get something I had forgotten and saw them again. This time, I could feel her tracking me. When our eyes caught each other, she grinned and said in a stage whisper, “I love your cookies.”

“Thank you,” I said, and smiled back.