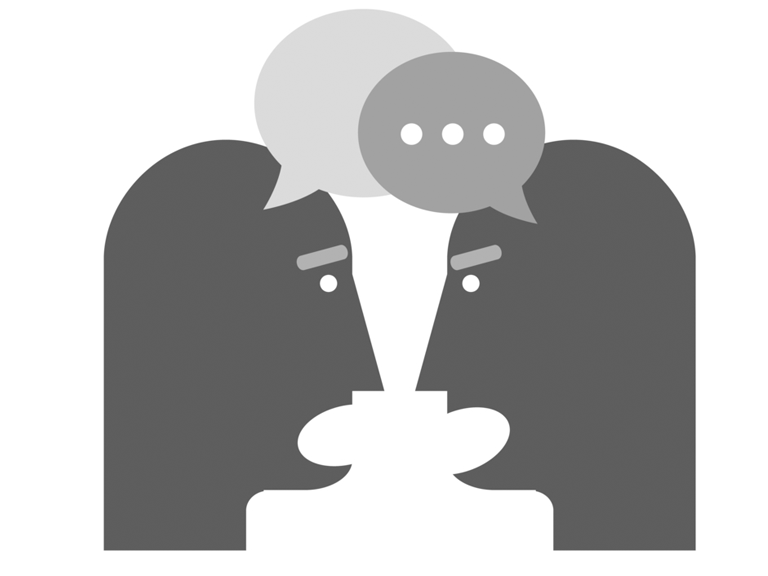 Teddy Roosevelt said, “Comparison is the thief of joy.”

The quote has come to mind this week in an unexpected way because I have watched the way comparison is used to deflect or derail a discussion. One says, “We need to close the detention camps,” and another replies, “Obama built them.” One says, “We need to look at guns as a public health issue,” and another says, “Why is no one upset about the daily killings in Chicago?”

To answer with a comparison is to say, first, “I have no intention of listening to what you are saying.” Listening is a lost art in today’s culture. Twitter, among other things, has turned public discourse into middle school recess (with apologies to middle schoolers). The point is to fire a zinger, not to actually pay attention to what anyone else is saying or to learn anything. After a couple of exchanges the posts back and forth are nothing more than, “Oh yeah?” “Yeah” “Oh, yeah?” “Yeah.”

That’s just what the world needs.

Years ago, Ginger preached a sermon and quoted Philo of Alexandria (as opposed to Philo of Waxahachie), who said, “Be kind because everyone you meet is fighting a great battle.” I have quoted it before and I keep coming back to it because it calls me to do something other than write off people whom I can’t understand. Another thing Ginger often says is, “Look for the emotion behind the behavior.” (I married a wicked smart woman.)

The thing that matters most to me is to belong. That’s the emotion behind my words and actions. I am sixty-two years old and living in my forty-fifth residence, as close as I can count. Home is an elusive thing, even though I wrote a book about it. I am convinced that life and faith are both team sports. We live and die together. The point of existence is community. So when the Hebrew prophets and Jesus say over and over that the measure of a society is in how well they take care of the poor and marginalized, it resonates deeply with me. I think the point of society is to take care of one another. There is enough to go around.

So it pisses me off when 680 Latinx people are arrested at work in an ICE raid at a factory in Mississippi while Trump was visiting in El Paso in the wake of a mass shooting aimed at Latinx folks. Yes, I know it was circumstantial that they happened at the same time, but it still makes me mad. So I will look at the emotion behind the behavior. What I see in the man in the White House is someone who is fueled by fear and controlled by comparison. He can hardly speak about what he has done without claiming it is the best ever. He was tweeting insults at the mayor of Dayton even as he was flying there to visit the people who were injured in the shooting. I could go on. My point is not to name his wrongdoings as much as to see where they are coming from. He is a frightened, insecure man. The actions that come from his emotions are destructive, so we need to speak up, yet we would do well to understand when we strike back we just drive him deeper into his fear.

That’s one of the reasons i do my best to speak to his words, actions, and policies and stay away from any personal attacks. The truth is I don’t know much about the man other than what is publicly available, which does not give a complete picture of anyone. I am working to give him the same benefit I wish others gave me when they decide who I am based on one or two things I have written or posted. To spend time talking about how unpresidential he is falls into comparison–he’s not like the others–and that’s not the real problem.

The question I want to address is what does it say about us as a nation that we would elect an insecure fear monger as president? He ran before and couldn’t get any traction. He was a joke when he kept after Obama with the birther stuff. He is not the problem. He is emblematic of the problem.

As a nation, we are a divided, frightened people.

Those of us who are naming the fear we see in Trump and others who appear to care little about the common good have fears of our own to deal with. It is frightening to me to think of what a second term for him could mean, or, for that matter, another term for Mitch McConnell. The work, for me, is to get beyond my fear and act in faith and hope that what we are living through is not the last word.

As I heard my friend Hugh say, in the end love wins; if love isn’t winning it’s not the end.

If I do any comparison that is helpful, it is in looking at how I looked at our nation when Obama was president. I didn’t know much about immigration policies. I wanted him to close Guantanamo, but I didn’t go to any protests. I think he did a lot of good things, particularly where health care is concerned (since I have a pre-existing condition), but I was not as well informed as I am now.

William Barber says the issues are not about “left” and “right,” but about a moral agenda that makes room for everyone. I am not speaking up because I vote Democrat, or because I am a “progressive,” but because at the heart of my faith is the call to care for those who cannot care for themselves, for whatever reason. Part of that call is to figure out what a compassionate response is to those who are fearful of inclusion, because they need to be included too.

I would love to tell you I know what that looks like, but I’m still working on it . . .