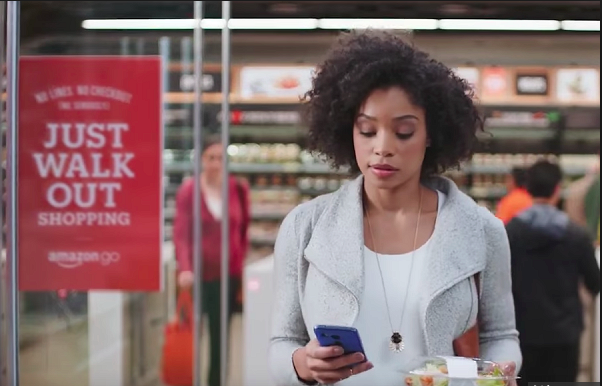 During the course of the day, this video showed up in the feed of a Facebook friend who lives in California.

If you don’t want to take time to watch the video, it is a promo for a new store Amazon is opening in Seattle in January called Amazon Go that allows you to shop through an app rather than having to stand in a check out line. You sign in with the app when you enter the store, pick out what you want, and then walk out. The app charges your Amazon account. The voice over said it was all possible because of something they call “Just Walk Out Technology.”

The string of comments and replies that followed was more interesting than the video in many ways, with people weighing in on everything from the frightening invasion of technology to whether anyone actually interacts with cashiers in a checkout line to worries about the jobs being lost to warnings about the end of the world. James Corden, host of the Late Late Show, commented, “That’s how I shopped all through high school.”

The layers of humor and concern are certainly there any time we confront a new technology, especially those designed to save time and make life more convenient, neither of which hardly ever seems to actually happen. And the discussions about the value of work, what meaningful work is, and why we should talk about a living wage rather than a minimum are crucial, but none of that is what set me writing tonight.

I want to talk about their catch phrase: just walk out technology.

I’ll start by saying I heard it completely out of context, probably because I’ve heard too many pops songs about walking out or walking away, Renee. To my ears, it felt as though they were taking words that meant one thing and turning them into something else.

My Facebook friend heard the words another way and wrote, “It’s almost as if the quiet narrative is ‘Live efficiently, die alone.'”

I have several friends in Durham who own restaurants, coffee shops, and food trucks. They are good at what they do and intentional about the way they engage their customers, and, if you visit one of their establishments, chances are you will stand in line because it’s worth it. The lines aren’t there by design necessarily, but they are part of the equation because efficiency—as defined by the “just walk out” crowd—isn’t their primary value.

Yes, I understand standing in line to get a great cup of coffee or a killer slice of pizza is different from standing in the supermarket Ten Items or Less line when the three people in front of you are all breaking the limit. And the ten minutes you spend there are not going to do any ultimate damage. The promise of efficiency is overrated; rather than seeing how quickly we can just walk out, what if we began to look for ways to stay, to be present, to just hang out. We too easily let ourselves be content with billiard ball relationships, bouncing off one another as we head off to the next place. Sometimes we are in a hurry, and there is an emergency, but it doesn’t need to be our daily way of life.