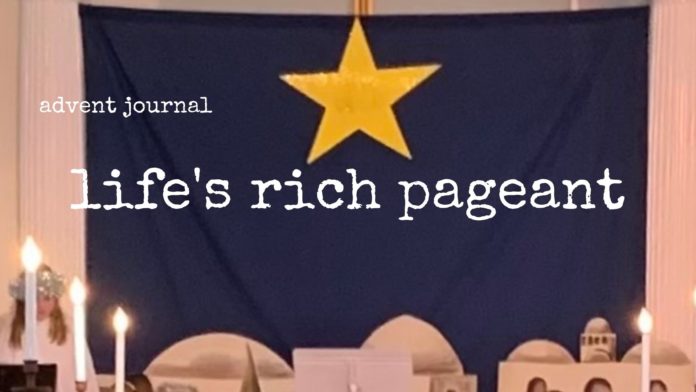 The final game of the 2022 World Cup and the annual Christmas pageant at church both kicked off at ten o’clock this morning. Since I was only able to record one of them, I saw the pageant in person.

As is the case in many churches, the drama is designed as a retelling, or a reenactment, of the Christmas story, or at least the story that has been passed down by our tradition. The play is not designed to be a theological investigation as much as a celebration of Christmas, our church, and our children.

The kids and the adults who have led them have worked hard over the past couple of weeks to put the play together. The whole thing unfolded more like a tableau, with each group–angels, shepherds, magi, and animals–all making their way to the manger. The various roles are assigned, often, by age, so as the kids grow up they play different parts. The littlest ones are the animals, who are allowed to dress as any animal they want. My favorite this year was the little pink pig. As I said, theological accuracy is not the point; the story is, and that story is about our life together.

As I watched and listened, I returned to a question that has always puzzled me: Why do we call it a pageant? My earliest introduction to the word had to do with Miss America, so when I also heard the word used to describe a Christmas play, I was puzzled. I still am.

According to the etymological dictionary, we don’t really know where the word pageant came from, other than it shows up in the late 1300s and might have roots in the Latin word pagina, which means page or manuscript. In the 1400s, pageant could mean a stage on wheels or the scene of a play, and then grew to mean a story or a tale, often an historical one. Since church plays predate evening gown and talent competitions, I will assume the word attached to bathrobe shepherds before it became connected to bathing suits and sashes.

The story that emerged over the four weeks of football matches–and carried with it a sense of history–was that of Lionel Messi, the, five-foot-seven, thirty-five-year-old forward for Argentina who is arguably one of the best players of all time, but he had never won a World Cup. His team was in the finals against France, the reigning champion. For Argentina to finally win with Messi would be a story for the ages.

Where our collection of motley angels and shepherds created a pageant that was joyful in its imprecision, Argentina’s teamwork was precision incarnated. For their second goal, they moved almost the full length of the field with six one-touch passes, each player placing the ball on his teammate’s foot in a way that no one seemed to break stride. It was pageantry: an elaborate display of skill and collaboration, as one dictionary puts it.

Messi entered this morning (well, it was morning here, but evening in Qatar) with everything on the line. This was likely his last chance to win a World Cup for his country. Our children (and adults) showed up today with varying levels of anxiety, I’m sure, but nothing at stake in any ultimate sense. However things rolled out as they told the story, it was going to be a great day. Anything that went wrong–or didn’t go as planned–would become part of our collective lore and memory, part of–to borrow from an old REM album–life’s rich pageant.

Actually, the album title doesn’t have an apostrophe in it, but Peter Buck said it came from a line from the movie A Shot in the Dark, one of the Pink Panther films, where Inspector Clouseau opens a car door and falls into a fountain. Maria, the woman with him, says, “You should get out of these clothes immediately. You’ll catch your death of pneumonia, you will.”

Clouseau answers, “Yes, I probably will. But it’s all part of life’s rich pageant, you know?”

Messi was not alone in his display of skill today, nor were the French players who had their own story to tell and came up one penalty shot short. Though there were individual honors to bestow at the end of the tournament, the shared trophy is what matters most. We had a few standout moments in our pageant at church–Baby Jesus bouncing up and down as teenage Joseph held him, Herod booming “I am troubled” so forcefully that she frighted people on the back row of the sanctuary, and one angel who walked down the aisle waving her arms like wings–but the shared story was what mattered most at our place, too.

In life’s rich pageant, triumphs are not the whole story. Kylian Mbappé is the twenty-four year old forward for France who had an amazing tournament and is sharing the story of disappointment with the other members of the French squad. During the regular season, he and Messi are teammates, which is another story. As we celebrated our children this morning, we also prayed for one of our longterm members, in his mid-nineties, who was hospitalized. Then, this afternoon, Ginger and I walked the Schnauzers and then walked ourselves.

Yes, Inspector, you are correct: it’s all a part of life’s rich pageant.