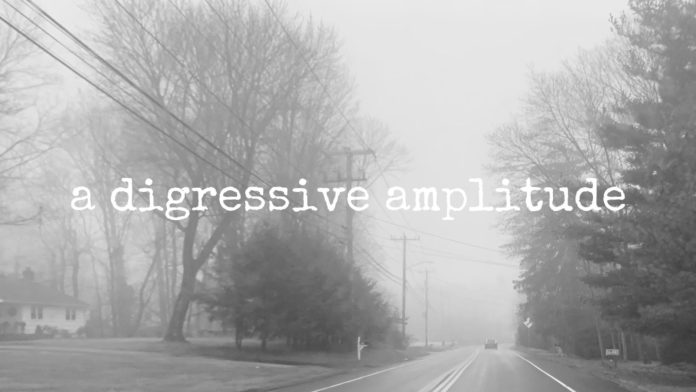 In my newsletter yesterday, I leaned into a quote from Kieran Setiya. The last sentence reads,

Don’t let the lure of the dramatic arc distract you from the digressive amplitude of being alive.

I have been dealing with the article for a couple of days, but I didn’t notice the phrase “digressive amplitude” until I say down to write tonight. I had to look up definitions of both words to get what he was saying.

When I woke this morning, the day appeared to offer the promise of sunshine, so I set off for my periodic Costco run in hopes that the afternoon would be as bright as the temperature was unseasonably warm. By the time I crossed the Connecticut River, the fog had rolled back in. The return trip home was a journey into a deepening gray horizon. Something about the day made me question myself, an existential exercise I can fall into too easily. I could feel the pull to escape the weight of the day by sleeping through it.

I was determined not to give in. I took the Schnauzers for a walk around the Green, but was still fading when we got back. Finally, I told Ginger I was going to see who needed rides instead of giving into the Nap Monster awaiting me on the couch. At least, I thought to myself, I can be useful and help someone get where they’re going. Lyft encouraged me with some bonus offers if I drove during certain hours, so off I went to New Haven.

I have learned that Union Station is a good place to start. I was about three minutes away when I received a request to pick someone up there and take them to East Haven–about a ten minute drive. He had ridden the train from Virginia, where he had spent two weeks with family. He looked like he had hiked for two weeks–and loved it. In the course of our conversation, I found out his dad has a friend in Guilford who makes wine in his basement.

The next passenger was a young woman with a small baby who went from one house to another without saying much, other than wishing me well. Then I picked up a young woman and took her to a strip center in Woodbridge and dropped her off at a store called Clay Time. She stayed silent for most of the trip. After she got out of the car, I pulled into a parking place to answer a few text messages. I got a request for a ride about two minutes later and it was the same person going back to where I had picked her up.

She smiled when I pulled up. Turns out she was just picking up a project she had completed. Something about our brief familiarity created space for conversation. I asked if she was a potter and she said she was learning. As we talked, I made some comment about putting the batter on the wheel (meaning the clay) and said something about my days in the kitchen making me think in cooking terms. She asked if I was a chef and that took things a whole different direction. I then asked what kind of work she did only to find out she was in high school and worked part time at a daycare center. She talked about how much she liked the people she worked with and then she said, “It seems like whatever you do is okay if you like the people you work with.” I agreed.

The address for the next pickup was a 7-Eleven. When I pulled in, two young men in Orthodox Jewish attire got in the car. They were talkative from the moment we left the parking lot. I learned there is a Jewish boarding school in New Haven. One of the guys had come from Tampa and the other from just outside Worcester, Massachusetts. At one point, the younger one called somebody to tell them he had gotten posters for something. The person on the other end must have been surprised at how quickly it had happened because the guy in the car said, “How did I do it so quickly? Because I have a great Lyft driver, that’s how.”

I was about ready to call it an evening when one more alert came up. Someone needed a ride from the CVS next to the New Haven Green to the Lulu Lemon store about a mile away. The woman who got in the car had left her headband that covered her ears on the train and Lulu Lemon had the replacement. By this time it had started to rain a bit. I asked if she was going to need a ride home after her shopping and she said she would. I told her I would wait, so she added the stop to her ride, bought her head band, and we kept going, as did our conversation. By the time I dropped her off at her apartment, we had found connections in Puerto Rico, teaching high school English, Yale Divinity School, and the love of Schnauzers.

Now back to the quote. Here is a larger piece of it:

Whatever story you tell about yourself, however simple and straightforward, there is endlessly more to your actual life. As Joe Moran insists: “To call any life a failure, or a success, is to miss the infinite granularity, the inexhaustible miscellany of all lives … A life can’t really succeed or fail at all; it can only be lived.” . . . The more you appreciate the sheer abundance of incident, the more you’ll see any life as an assortment of small successes and small failures, and the less prone you will be to say, despairingly, “I’m a loser”—or with misplaced bravado, “I’m a winner!” Don’t let the lure of the dramatic arc distract you from the digressive amplitude of being alive.

This time around, I can also see “infinite granularity” and “inexhaustible miscellany.” In my personal exhaustion, I drove around in the inexhaustible miscellany of the lives I helped get from station to home, store to store, all of it happening within a five mile radius of downtown New Haven. The digressive amplitude–the magnitude of miscellany,–pulled me out of my sad story and into “the sheer abundance of incident,” as Setiya calls it, that makes life, well, life.

And, when I got home, Ginger and I had spaghetti for dinner. It is, after all, National Spaghetti Day.