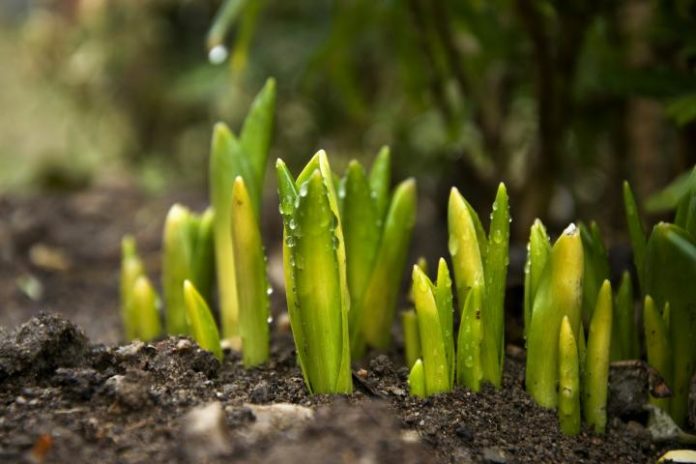 Spring never comes soon enough in New England or, perhaps I should say, it takes a long time to get here. It teases us in early April, as it did for the last two or three beautiful, crisp, sunlit days, but then come mornings like the one we woke up to that are cold and grey and rainy and make the budding trees look like guests dressed for a costume party only to find out they had been invited to a wake. It’s one thing to live through days like these in early April; it’s another thing to face them in early or even mid-May.

Despair was the word David Whyte unpacked in my reading this morning, and he spoke of it as a season.

Despair is a difficult, beautiful necessary, a binding understanding between human beings caught in a fierce and difficult world where half of our experience is mediated by loss, but it is a season, a waveform passing through the body, not a prison surrounding us. A season left to itself will always move, however slowly, under its own patience, power, and volition.

To let the seasons turn, whether winter or despair, in their own “patience, power, and volition” is easier said than done. Covid-19 is an unexpected season in our lives, with less indication of when it will finally turn than our endless winter. When it comes to waiting on spring, at least I know I’ll get to plant vegetables by Memorial Day.

How, then, do we let this season pass under its own patience as we sit together all alone?

The other book I am reading is The Rumi Presciption: How an Ancient Mystic Poet Changed My Modern Manic Life by Melody Moezzi. Her word today was distraction. She started the chapter with a couplet from Ruminator:

She explained that “the five and six” was Rumi’s own shorthand for the distractions of the world: the five senses and the six directions (north, south, east, west, up, and down). Though she wrote the book long before we ever began to come to terms with the virus, she wrote something that has deep resonance for these days:

Never has it been so easy to forget what questions we were asking in the first place.

Distraction pulls us into an artificial world of incessant crisis and endless obligations. Whyte says despair can only stay “beyond its appointed time through the forced artificiality of created distance.” Perhaps created distance and physical distancing do not have to be synonymous. Perhaps, as many are beginning to note, we would do well to realize the goal does not need to be go back to life the way it was.

We can give ourselves room–space, distance, perspective–to remember the real questions we wanted to ask of life, or ourselves, of each other.

Since the forecast was for rain last night, I spent a couple of hours of my late afternoon in the garden, tilling beds, marking beds, and sifting compost. I may not be able to hasten the season, but I can prepare for it. Tom, my gardening buddy, was planting things that are undaunted by April in Connecticut: spinach, carrots, cabbage, kale, snap peas, parsnips. In the middle of Holy Week we were plotting a resurrection that will drag on all summer long.

When he and I met with four or five other folks who were interested in being a part of our gardening team earlier in the year, Tom offered four “Garden Goals.”

I had finished writing last night when I got a text from a friend saying John Prine had died. I was on the phone with my friend Kenny with whom I have shared a love of music for thirty years. I finished talking to him and came down to tell Ginger. “Play something,” she said, so I got out my guitar and played “Angel from Montgomery,” which is my favorite song.

As I was reading about distraction and despair this morning, and thinking about how we stay attentive to the changing seasons, I could hear Prine songs in my head that all spoke to how we live through this season of despair and distance.