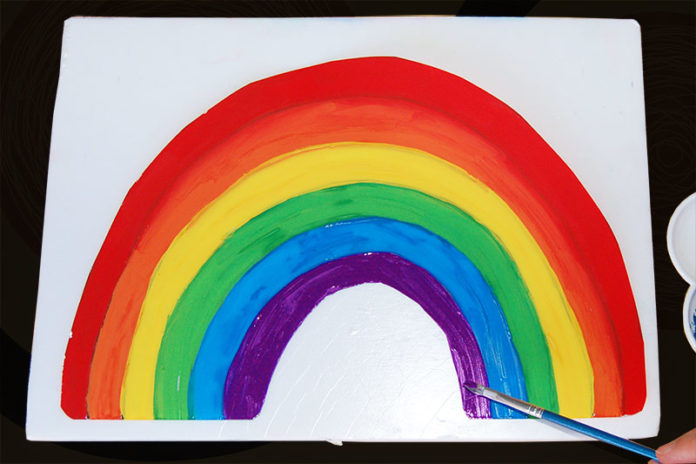 In October, I started a bridge pastorate at a church in the town next to us because the pastor had to take family medical leave. I started posting the sermons and songs here as well. Next Sunday will be my last Sunday at the church and we are going to do the service live on Zoom, so I will not have a recorded sermon, which means this will be my last in this unintentional series. Thanks for being in the congregation.

The passage this week is Genesis 9:12-17, which is the end of the story of Noah and the flood. The song is James Taylor’s “Shower the People.”

The story of Noah and the ark is one most of us have known since we were children: the pairs of animals, the dove with the olive branch, the rainbow, and, of course, the song. Do you remember

along with the other seventy-two verses that had great rhymes (the animals they came in by twosies; elephants and kangaroozies) and on the chorus we waved our hands high to rise and shine and give God the glory.

The song almost makes the flood sound like fun, but the biblical account says that God became so frustrated with humanity that God regretted creating them and decided to drown them out–except for Noah and his family and a big boat full of animals. The implicit theology built into our little sing-along is problematic because it says God uses weather as a weapon of justice and regret. Listen to Genesis 6:5-7.

The Lord saw that humanity had become thoroughly evil on the earth and that every idea their minds thought up was always completely evil. The Lord regretted making human beings on the earth and was heartbroken. So the Lord said, “I will wipe off of the land the human race that I’ve created: from human beings to livestock to the crawling things to the birds in the skies, because I regret I ever made them.”

The story of the flood made the weather in Texas play big in my thoughts as I prepared to preach on our passage today, for a couple of reasons. One is that my family roots are in Texas and many people I love live there are have been severely affected by the unexpectedly harsh weather and its aftermath. Most Texas cities and towns don’t have the resources we do, when it comes to winter: plows and shovels, or even good coats. The second reason is it has brought up again how deeply the thought that God is behind the storm is embedded in our minds and how hard that is to live with. The third is what I learned this week about what it means to take care of each other from both the flood and the freezing cold.

The story of the first eight chapters of [Genesis] is tragic but simple: creation, followed by de-creation, followed by re-creation. God creates order. Humans then destroy that order, to the point where “the world was filled with violence,” and “all flesh had corrupted its way on earth.” God brings a flood that wipes away all life, until–with the exception of Noach, his family and other animals–the earth has returned to the state it was in at the beginning of Torah, when “the earth was waste and void, darkness was over the surface of the deep, and the spirit of God was hovering over the waters.”

What we tell as a bunch of stories are part of the same story, he says, and he notices a couple of interesting details. In Genesis 1, the word good repeats seven times; in Genesis 9 the word covenant–promise–repeats seven times. Here’s the thing he said that most caught my attention: In Genesis 1, God said, “Let us make humanity in our image;” in Genesis 9, God said, “I will surely demand your blood for a human life, from every living thing I will demand it. From humans, from a person for their sibling, I will demand something for a human life. Whoever sheds human blood, by a human their blood will be shed; for in the divine image God made human beings.”

After the storm, God took a weapon and turned it into a symbol of relationship: “I will place my bow in the sky so I will remember.” God put it there to remind God, not us, of the promises God has to keep. When God is tempted to respond to the violence we inflict on one another with violence, the rainbow is a reminder that God promised to respond to our violence in love. And God’s invitation to us is to live the same way.

The story raises the question of what God does with God’s anger, which is hard for us because far too often, our American model of expressing anger feels petulant and immature: we like to throw tantrums. Sometimes it seems like expressing rage is our national sport. Too often, we use our anger as a way to express that we feel superior to those we are targeting.

God’s anger, as we see it in scripture is often harsh, but it is not impulsive. And God learns from it. God’s promise not to flood the world came after God flooded the world, looked at what happened, and repented. Regretted. God was changed by the encounter, by the ramifications of God’s own actions. God appears to also realize that humanity was not going to quit doing the stuff that fed God’s anger, so God made a unilateral covenant: here is what I am going to do–and here is how I am going to remember it. I am going to change what I do with my anger.

And that takes me back to Texas.

I was living in Dallas in December 1983 when it did not get above freezing from December 18-30. It was the coldest December on record. Roads were icy. People were cold. Some pipes burst. But we didn’t have the systemic problems we have seen this past week. The problem this week in Texas was not just that it got really cold. The problem this time was that the people who make decisions about how to take care of the electrical grid and the water supply had gone years without doing the preparatory and maintenance work to be ready for the storm. They did not consider everyone as they planned for the future, so when it came time to take care of everyone, they couldn’t do it. Put simply, they put profit and political gain before people.

On the other hand, I watched in my Facebook feed as friends reached out for help because they didn’t have power or water and others took them in. Strangers reached out to one another to make sure people stayed warm and fed. Churches and synagogues and mosques opened as places of refuge. One man who owns a mattress business let people come sleep in his showrooms.

I think I can pretty much guarantee that everyone who opened their homes or businesses or buildings to take care of others was angry that millions were without power and safe water. What they did first was take care of each other. I hope they come back to their anger and let it fuel them to make changes in the system so that those in charge prepare for the common good because that is another way we take care of each other. Our personal actions matter, but we undercut our compassion when we allow dehumanizing systems to keep doing violence to others.

God created us in the image of God. Every last one of us. After the flood, God reminded Noah and the others that the place they were to look for the image of God in other people–every other person. Then God painted a bow and hung it in the clouds to remind God of the same thing.

Last week, we rose with Jesus from the baptismal waters to be reminded that we are God’s delightful beloved. This week, the flood waters recede to remind us we are called to treat everyone else as the delightful beloved of God. We can recreate our broken world into the beloved community by taking care of each other, by valuing each other, by loving one another as we love ourselves.

So, let’s rise and shine and give God the glory, children of the Lord. Amen.