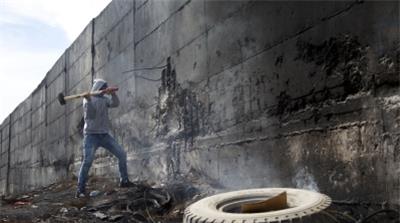 One of the things the move from Durham to Guilford precipitated is my transferring from the computer store there to the one in New Haven. With the transfer also came a change in role because the position I held in Durham was not open here, which also meant a couple of weeks of training to learn my new job, which is dealing with people whose phones are broken and shattered, for the most part. They come into the store in some stage of questioning or crisis and I am charged with helping them sort it out.

We spent a good deal of time in the training talking about “stop words”—those words that stop a conversation or end the search for options: no, I can’t, I won’t, unfortunately . . . . What I realize in practice is my search for vocabulary that keeps the conversation going and presents the possibility of something other than the worse case scenario is more than semantics or retail strategy. It is humanizing, even healing, and it carries beyond my shift at work. I can stop myself with words as well.

In our new world, I ride the train from Guilford to New Haven most days, which means I have time to read rather than watch the road. My recent bound companion is The Rise: Creativity, the Gift of Failure, and the Search for Mastery

by Sarah Lewis. The book takes on a few stop words of its own, including failure and fear. In the closing pages she writes,

The moment we designate the used or maligned as a state with generative capacity, our reality expands. President John F. Kennedy once mentioned an old saying that success has many fathers, but failure is an orphan. Failure is an orphan until we give it a narrative. Then it is palatable because it comes in the cont

ext of story, as stars within a beloved constellation. (198)

One of the ways her words hit me is to say we become family to one another in our stories. Failure in an orphan until there is a narrative, the connective tissue of words that bind us to one another. When I tell you my story and you tell me yours we see more than the pieces of dreams that lay on the floor around us. We see that we are not alone, that failure is not the last word.

When I opened my journal to write down the quote, I found things I had jotted down from an old TED Radio Hour episode on being grateful that focused on a Benedictine monk named David Steindl-Rast. As I read through it again I realized he even takes the stop out of the word stop. Listen.

How can each one of us find a method for living gratefully, not just once in a while being grateful, but moment by moment to be grateful . . . . It’s a very simple method. It’s so simple that it’s actually what we were told as children when we learned to cross the street. Stop, look, go. That’s all. But how often do we stop? We rush through life. We don’t stop. We miss the opportunity because we don’t stop. We have to stop, we have to get quiet and we have to build stop signs into our lives. When we open our hearts to the opportunities, the opportunities invite us to do something. Stop, look, and then go, and really do something. And what we can do is what ever life offers to you in that present moment. Mostly, it’s the opportunity in joy.

If you take this opportunity, go with it and that little stop, look, go is such a potent seed that it can revolutionize our world because we are, at the present moment, in the middle of a change of consciousness. There’s a wave of gratefulness because people are becoming aware of how important this is and how this can change our world. It can change our world in immensely important ways because if you’re grateful, you’re not fearful. And if you’re not fearful, you’re not violent. If you’re grateful, you act out of a sense of enough and not from a sense of scarcity, and you’re willing to share.

I am moved by both Lewis and Steindl-Rast because they take the words failure and fear seriously, but not ultimately because they also take the words hope and gratitude seriously. The former will not be the last words. Steindl-Rast’s progression haunts me in the best way: if we are grateful, we are not fearful; if we are not fearful, we are not violent. Violence, at its root, is fear incarnate, not power. Though the powerful may wield the weapons, they attack out of fear. Terrorists act out of fear as much as they try to foment it in others. As we know from the stories of folks like Rosa Parks and Mahatma Gandhi and Martin Luther King, Jr. and Aun San Suu Kyi and Nelson Mandela true power, even authority, lies in those who know responding to violence with violence doesn’t solve or change anything; it only deepens the wounds and feeds the fear. Their call to us is to say yes, to live in gratitude, open our hearts to one another, and incarnate hope. (Insert favorite W. S. Merwin poem here.)

As I wrote last night, I landed on a question. I appear to have done the same tonight, though I don’t know that means a new question every night on the road to Bethlehem. But for this night, I ask another: what’s stopping us?