John Wendland, my best friend in first and second grade, had horses. He was the youngest child in a big family and his two oldest sisters, both in high school, said they would take us riding. Mary, the oldest, pulled me up on the saddle behind her, told me to wrap my arms around her waist, and off we went. John was riding with his sister, Sarah. The horses moved gently across the field and then among a small stand of trees as we rode for about twenty or thirty minutes until Mary said, “I guess we’d better head home,” which apparently in horse language translates as, “Get back to the barn as fast as you can.” The animals broke into a dead run and I hung on for dear life, scared to death. I was still squeezing Mary when the horses stopped.

As Ginger and I are on the cusp of completing our one-way journey from home to home, I’ve thought a lot about horses, both those I’ve ridden (not too many since that frightening afternoon) and those I’ve watched run for the roses on television. In most races, the horses find a new level of effort, a different gear, when they make the club house turn and head for home. It’s language with meaning beyond the racetrack: it’s what matters most in baseball; it’s where the cookie is at the pig races at the State Fair (my personal favorite); and it’s almost always in a circle. This time, however, we aren’t going back home, we’re going to home. The reliable circle is taking on a new shape, following I-40 across Tennessee and Carolina, until we stop some time tonight in front of our new address.

Last night, as Ginger and I walked back to the hotel from a wonderful dinner, a woman stopped us on the sidewalk. She was small, maybe five feet tall, with glasses and grey hair kept in a long braided ponytail that exuded an elegant simplicity. “I’m a street poet,” she said. “May I share a poem with you in exchange for some money so I can find a place to spend the night?” Ginger and I looked at each other and then back at her and nodded. She started reciting a list of things I thought was the poem, only to find out, when she finished, that it was simply a list of topics on which she was willing to recite. Ginger was fooled as well. We tried to think back on what she had said.

“Did you say ‘philosophical’?” I asked, grasping at straws.

“I said ‘positive,’” she answered.

“Positive is good,” Ginger said, and the woman began to speak in a quiet, rapid rhythm. I’ve been trying to come up with an adjective to describe how she came across: resilient. Yes. Resilient. She is probably someone who has gotten more good news than bad, who appeared (to Ginger’s well-trained sensibilities) to be probably dealing with some sort of mental illness, and who stood on the street with the poise of a poet to risk sharing her words, hoping for a compassionate response. Her voice was soft enough that I couldn’t get most of the words, but I do remember, “we are all children of God,” as one of the lines.

I don’t think I’m belittling her condition to say I found some resonance with her homelessness as we stood together on the sidewalk. These past three days, when people find out we aren’t from Chattanooga, they ask, “Where are you from?” I respond with a longer answer than they were expecting, I’m sure: “I was living outside of Boston and I’m moving to Durham, North Carolina for my wife to start a new job.” I’m between addresses. I’m heading for home, but the road doesn’t go in a circle this time.

My coffee shop du jour is Greyfriar’s. (Chattanooga is a good coffee town.) I rode the shuttle from the hotel with a new driver who told me Durham had a great NASCAR tra 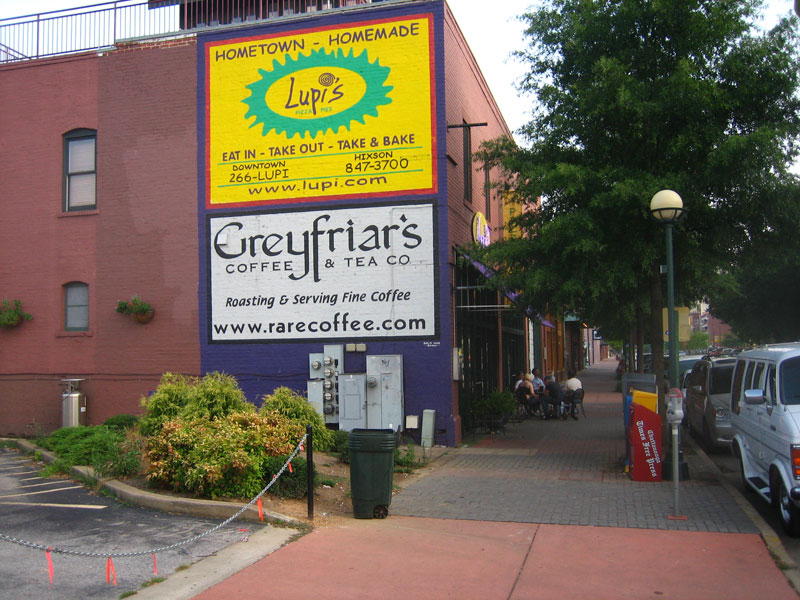 ck (speaking of ovals) and a new set of characters and found a great cup of coffee, a wonderful cranberry-cinnamon scone, and a wall plug by the table. The barista came by the table to see how I liked the scone and we talked about scones for far longer than most people would consider normal. The three guys at the table next to me are spending more time talking about chess games than I consider normal. The latest arrival at the table is the most vocal, with the look of one of those guys who plays speed chess in a New York park. He’s reading from a book on chess and has been reading aloud such that I can’t help but hear. He talks with the rhythm of a street poet in a poetry slam, determined to win with his words. He’s talking faster than I can write down what he says, or even understand it, except for this sentence: “The more you learn about playing chess, the more you realize what you don’t know.”

I’ve not ridden many horses since that second grade afternoon. One afternoon in Mexico, where Ginger and were on vacation, I agreed to go riding because Ginger wanted to ride horses on the beach and the desk clerk at the hotel assured me the horses stayed in line the whole time. No one would bolt for the barn. When we got to the starting point, the man put Ginger on a small horse and then said to me, “Hermano grande! You need big horse,” and put me on the Mexican equivalent of a Clydesdale. The ride was uneventful until we got to the beach, where my horse decided not to stay in line but to trot into the ocean, walking parallel with the others but with water over both his legs and mine. I could hear Ginger behind me, laughing. All I could do was hold on and keep saying, “Be nice, Big Damn Horse, be nice,” until he came out of the water and turned toward home.

Life, this time around, looks more like an opened paper clip (you know – where the outside leg kicks straight out) than a racing oval. Tonight we will stop driving and stay awhile in Durham; a long while. In moments like these, the soundtrack of my life seems to rise up, over even the guy next to me who is still talking about chess:

For the Bible tells me so
Jesus is the way home

Thanks to Kate Campbell for the song, to Chattanooga for the welcome and rest, to family gathered in Birmingham, to all those back at home in Massachusetts, and to those waiting at the home just down the road in Durham. We’re making the club house turn.