Today is Bob Dylan’s birthday; he’s sixty-six. Though I’m not one of those who owns every Dylan record, I am one who has been marked by his words and music. He is someone who has articulated life both personally and prophetically. I thought I would take some time to say thanks.

I got my first guitar for Christmas of my ninth grade year, which was 1970 to the rest of the world. I was lucky because I had friends who already played and so I had a chance to learn quickly. One of the first songs I learned to play was

Come gather ’round people wherever you roam
And admit that the waters around you have grown
And accept it that soon you’ll be drenched to the bone.
If your time to you is worth savin’
Then you better start swimmin’ or you’ll sink like a stone
For the times they are a-changin’.

I don’t remember the last time I actually played “The Times They Are A-Changin’” but I thought about one of the verses as I wrote my congressman and senators to decry the way the Democrats have capitulated on the Iraq war funding. I realize the issue is complicated and what bothers me most is I don’t see anyone in Washington who speaks and acts like a real leader. Dylan was way ahead of me. Over forty years ago he wrote:

Come senators, congressmen please heed the call
Don’t stand in the doorway, don’t block up the hall
For he that gets hurt will be he who has stalled
There’s a battle outside and it is ragin’.
It’ll soon shake your windows and rattle your walls
For the times they are a-changin’.

There were eight or ten of us who would sit in a circle in the grass at Nairobi International School most everyday and play and sing. Even in Africa we felt the wind blowing, though the answers Dylan said were there felt elusive. I realize one of the things I learned from those days was life was fundamentally about searching for better questions. Though many of his lyrics roll out like emphatic prophetic hammers, their power is in the profound interrogative at the heart of it all. He wrote lines as full of symbolism as they were of syllables, lines that still stick in my heart and mind:

Far between sundown’s finish an’ midnight’s broken toll
We ducked inside the doorway, thunder crashing
As majestic bells of bolts struck shadows in the sounds
Seeming to be the chimes of freedom flashing
Flashing for the warriors whose strength is not to fight
Flashing for the refugees on the unarmed road of flight
An’ for each an’ ev’ry underdog a soldier in the night
An’ we gazed upon the chimes of freedom flashing.

His was music that made me angry and hopeful at the same time. His songs were some of what fertilized my life to help me become who I am now. Sometimes they made me scratch my head as I tried to figure out what he was saying, sometimes they connected me with those around me as we sang together, sometimes they burrowed deep into my memory and took up permanent residence.

Half-wracked prejudice leaped forth
“Rip down all hate,” I screamed
Lies that life is black and white
Spoke from my skull. I dreamed
Romantic facts of musketeers
Foundationed deep, somehow.
Ah, but I was so much older then,
I’m younger than that now.

Alongside of the politics, Dylan’s songs were some of those that taught me about the complex continuum of personal feelings. His lyrics were both simple and impressionistic, telling a story and leaving room for us as listeners to fill in the details.

I’m walkin’ down that long, lonesome road, babe
Where I’m bound, I can’t tell
But goodbye’s too good a word, gal
So I’ll just say fare thee well
I ain’t sayin’ you treated me unkind
You could have done better but I don’t mind
You just kinda wasted my precious time
But don’t think twice, it’s all right

How could he write a song where the characters were both unknown and achingly familiar? And who says, “Fare thee well,” anyway?

When I was discovering his music, Dylan was thirty. Today, I’m fifty and he’s old enough to collect Social Security. Daniel Pinkwater had a piece on All Things Considered this afternoon talking about the current resurgence (insurgence?) of folk songs. His lament was the young singers covering the songs weren’t connected to the original feelings behind the songs. “They don’t know who the original singers even were and are young enough for their parents to not know either,” he said. I hear his point and I want to give the current ninth graders with guitars room “for meditations in cathedrals of [their] own,” to borrow a phrase from Billy Joel. Dylan has had the stage for a long time and, one of these days, will be as forgotten as the rest of us. Permanence is not the point. Dylan appears to know that, as evidenced in this quote from The Writer’s Almanac:

The best way I know to finish my tribute is to borrow a few more words:

I’ll look for you in old Honolulu,
San Francisco, Ashtabula,
Yer gonna have to leave me now, I know.
But I’ll see you in the sky above,
In the tall grass, in the ones I love,
Yer gonna make me lonesome when you go. 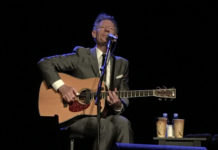