I’ve spent the day with food and have a couple of random comments to make, none of which is necessarily apropos of the other.

One of the things I’ve learned about from Chef is the Peruvian potato. It’s purple. If you don’t believe me, look at this picture I found at culiblog. 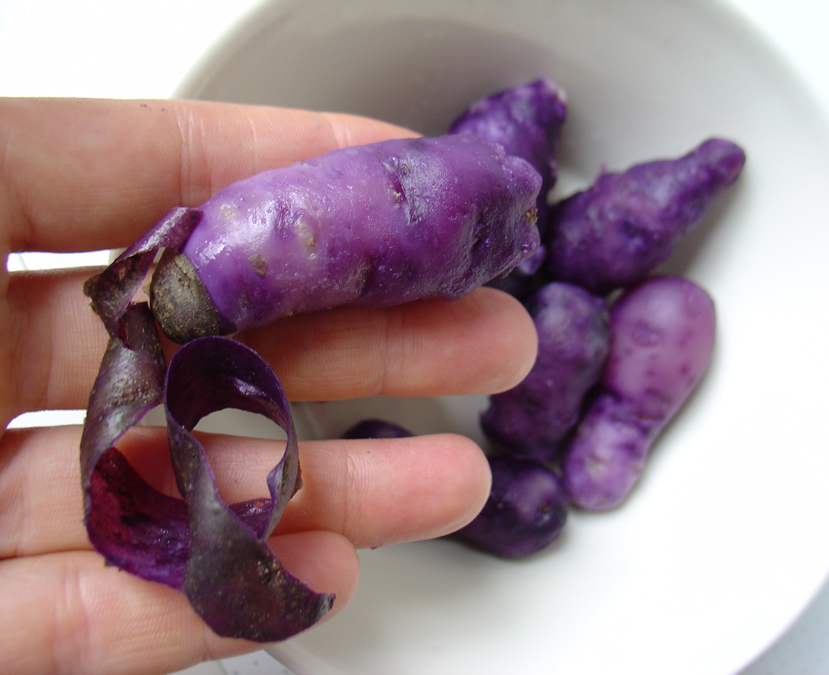 They make really cool mashed potatoes (if you boil them without peeling them) and add a lot of color the meal, as well as good nutrition. Last spring, I made potato chips to go with some of the lunch sandwiches and used a combination of sliced Yukon Golds, sweet potatoes, and the Peruvians to make a pretty cool multicolored snack.

Chef says the secret of the purple tuber is not so much the spud itself but the company it keeps. The Peruvian farmers plant the potatoes in the beet fields. As they grow and mature, they pick up both nutrients and color from sharing the field with their deep red friends.

We are having a sort of unscheduled potato festival at the Inn this weekend because of the requests of the wedding and the tastings that are scheduled. I’m cooking with Yukon Golds, Peruvians, Fingerlings, and Red Bliss. I will be roasting and mashing for the most part. Before I got into restaurant work, I thought a potato was pretty much a potato. I mean, I knew there were different kinds, but I never imagined they tasted or acted differently from one another. The Russets are the best bakers. Yukons make the best mashed potatoes by far because of their thin skins and sugar content. The Fingerlings roast well. The Red Bliss aren’t particularly my favorite, but people like the color on the plate, I think. If you’re going to use them, roast them. They are too starchy to mash well in my opinion.

Each of the varieties I mentioned distinguishes themselves because of something innate. The Peruvian is most noticeable because of how it is changed by who it grows alongside of. Something in that is kind of cool.

Part of modern culinary fashion is the use of “baby” things: baby carrots, baby spinach. What we call “haricot verts” (which is French for green beans) are a “baby” variety. You can get baby eggplant, baby Brie cheeses. Tonight we even served grilled baby bok choi as our vegetable du jour in the restaurant. Tomorrow, one of the appetizers for the wedding is baby endive with Roquefort and walnut mousse.

Part of the reason for the trend, I think, is one fairly practical. Baby vegetables are easier to serve. I can plate a half of a baby eggplant more easily and more attractively than putting a couple of slices of Papa Eggplant next to the steak. Part of the reason is the way they look. The baby endive are purple and white and quickly catch your eye. And a part of the reason is, I think, they offer more room for creativity.

mall container of micro greens and asked if I knew what they were. They are a mixture of small colorful leaves we use as a garnish on many dishes. We’re past baby; we’re micro. What I learned that night is the greens are a micro version of the mesclun, or spring mix, we use for a couple of our salads. He pulled out the micro arugula, radicchio, and the rest. I loved listening to him teach me about the greens because he was so captivated by what he was telling.

Here’s a sentence I rarely think of writing: George Bush and I had something in common today. We both hung out with Brazilians.

One of the appetizers for the wedding tomorrow is Coconut Shrimp, which was chosen by the bride and groom. A little farther down the banquet order it says in all capital letters: “FATHER OF THE BRIDE IS ALLERGIC TO SHELLFISH. DEATHLY ALLERGIC. DEATH. DEATH.”

Here’s my question: if your dad is deathly allergic to shellfish and you’re picking the appetizers, why do you pick the shrimp on your wedding day?