I suppose there are any number of ways I could describe my life, but one that fits as well as any is a movie in search of a soundtrack. Whatever is going on, I’m always listening for the right song to rise up from the jukebox in my mind and take it’s place on the turntable. (Yes, I realize the metaphor needs to be updated.)

Though North Carolina is a state with an early voting option, Ginger and I waited until this morning to vote just because we like voting on Election Day. I made a quick trip to Dunkin Donuts to get our stand-in-line coffees and then we walked the block and a half to the polling place in our neighborhood, which is the local elementary school. Since we live in a very politically and culturally active area, the lines weren’t long because most of our neighbors voted early, so we were home just a little after seven. Up until today, I’ve voted only in Texas and Massachusetts during presidential elections, which means the fate of the state was already determined before I even cast my ballot. This year, North Carolina is one of the “swing states” (I like that better than “battleground”) and my vote carries some weight beyond my exercising my opportunity to be a part of the process.

This election marks the ninth time I have voted for president. I turned eighteen in 1974, just two years after my family had moved back to the States from Africa, and I was still figuring out what it meant to be an American in many ways. (Wait – I’m still trying to figure that one out.) For all that confounded and overwhelmed me, I was taken in most by the music. When we lived overseas, music was one of the main ways I felt connected to the US. I can remember getting James Taylor’s Sweet Baby James, or Crosby, Stills, and Nash, or Carole King’s Tapestry (just to name a few). One of the albums that marked me most was Bridge Over Troubled Water by Simon and Garfunkel. We moved to Houston in January of 1973 and somewhere in that year Paul Simon went solo and released There Goes Rhymin’ Simon, which had the radio hit, “Kodachrome.” For a kid in eleventh grade what’s not to connect with a song that begins

when I think back on all the crap I learned in high school
it’s a wonder I can think at all.

And it’s not the best song on the record. “St. Judy’s Comet” is a wonderful take on a lullaby, “Loves Me Like a Rock” is good gospel fun, “Something So Right” is worth hearing just about any time, and then there’s the song I woke up humming in my head this morning, “An Ameican Tune.”

Two things about this song pull at me. The first is the lyric, which is a mixture of hope and struggle. Regardless of who wins the presidency today, we face the daunting task as a nation of figuring out how to be together. Reconciliation needs to become our national pastime. We are all wounded and battered. I wonder why it’s so hard to find the connectedness in our pain. We seem so quick to choose to strike out, as if seeing others hurt like we do makes things better. Would that in what feels like our age’s most uncertain hour, our American tune would be orchestrated with something other than the cannon of the 1812 Overture.

Speaking of tunes, the second thing that pulls me to this song is the melody, which is an adaptation of Bach’s St. Matthew’s Passion, or (as I know it) “O, Sacred Head Now Wounded.” Melody leads to melody and then to lyric, and I am pulled to the final verse of the hymn, which are some of my favorite words in any song:

what language shall I borrow to thank thee, Dearest Friend
for this thy dying sorrow, thy pity without end?
o, make me thine forever, and should I fainting be
Lord, let me never, ever outlive my love for thee

I know nothing of how Simon came to put his words to Bach’s melody, but that those notes can carry both the uncertain feelings about my country and the heart of my faith calls me to think about how I can carry the reconciling love of God into the uncivil conflict that is our political arena. As a nation, we can’t be forever blessed, but as children of God we never run out of love. How can it be that it seems so much easier to choose sides than it is to choose solidarity? 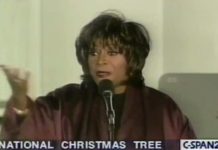