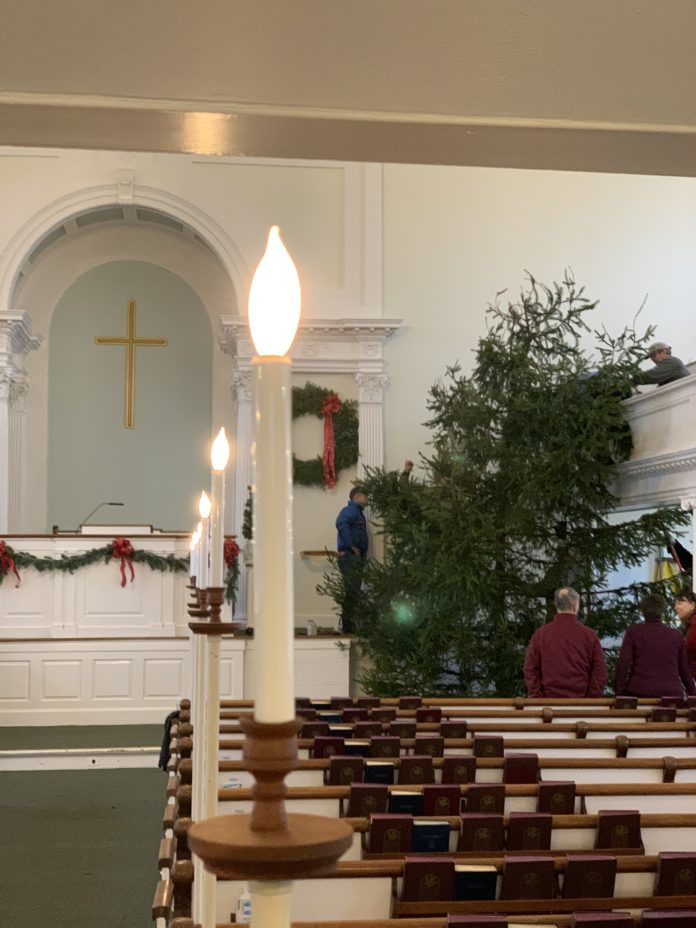 This morning I preached at our 8:30 service; our annual pageant took place at 10:00, so I didn’t have to do double duty. The passage for today was Matthew 1:18-25, which tells the story of Gabriel’s visit to Joseph. What follows is my manuscript, which is specifically aimed at our congregation, but it feels worth sharing. I titled it “O, Christmas Tree . . .”

The first and only time I ever cut down a tree for Christmas, until I joined the committee four years ago, was when I was in college. I attended Baylor University in Waco, Texas. My parents lived in Houston, but also had a small cabin near Alvarado, Texas–about an hour from Waco–where we decided to meet as a family. I got there first because I was closest and I thought it would be cool to have a tree up when they arrived. I took my saw, found a tree, cut it down, and dragged it back to the house. It was then I realized that I had no sense of how big the tree was. So I cut off a good chunk of it and put it in the stand. I even decorated it and put lights on it.

When my family arrived, I told them the story. Then my mother, whose name was Barbara, asked–with a smile in her voice, “Why did you cut the top instead of the bottom?” We laughed hard and had a great Christmas.

This year, I went with the Committee went across a field off of Clapboard Hill Road and we cut down a tree too big for our sanctuary, so we had to cut about six feet off the bottom of it so it would fit in the church. The tree appears to have grown up without much instruction or attention. It never knew it was supposed to maintain a triangular symmetry as it matured. It had no idea it was being groomed to be the First Church Tree. It just grew. Some of its branches were over-achievers and reached out farther than their siblings. Some stayed close to the trunk, creating a rather artistic shape, you could say. I said it looked like a giant version of the Charlie Brown Christmas tree. Barbara Johnson, however, captured it perfectly when she stood up during joys and concerns and said, “My joy is this tree that reminds us that no matter who you are or where you are on life’s journey, you are welcome here.”

After church, Barbara Nichols and I were talking about the tree and she said something oddly familiar, “I know you had to cut off a lot to bring it in, but why did cut off the top instead of the bottom?”

This week, as I have driven and walked around town, I have intentionally looked at the “Christmas” trees that grow in yards and fields. Some seem to have the perfect shape, and then I would see a double trunk, or a big gap among the branches. Some seemed to bulge in places they shouldn’t–but I can understand that. When I just looked at the trees as part of the landscape around them, they fit in and seemed beautiful. But, like most of us, a closer scrutiny revealed flaws.

In our passage this morning, Gabriel visited Joseph after he had discovered that Mary was pregnant. They were not yet married. Whatever plans they had made for their life together were in a shambles. Joseph had not imagined he would end up being a part of bringing the Christ Child into the world. He just knew he had to figure out how to break off their engagement without disgracing Mary. Joseph was ready to cut the top off of everything, if you will, but Gabriel said, “Don’t be afraid. Take a step back. God is at work. So stay with Mary and, when the baby comes, name him Emmanuel–God with us.”

The angel’s words changed none of the circumstances, but they offered Joseph a new way to look at them. Yes, their lives were in chaos. Things were not as he thought they were going to be. Things he had hoped for had fizzled out, and a bunch of stuff had come out nowhere. He could respond in fear–fear of the unknown, fear of feeling out of control, fear of not keeping up appearances, fear of embarrassment or failure–or, if he listened to the angel, he could respond by naming God’s presence in his life. He could name his son Emmanuel–God with us.

Though there will be little angels singing glory to God in the pageant that will take place in about an hour, the real herald for me this season is our Christmas tree because, as Barbara Johnson noted, it does say we all belong.

Many years ago, my friend Billy Crockett and I wrote a song called “God is for Us.” The chorus says,

Make sure you see the tree, if you haven’t had a chance. Better still, let’s make sure we really see each other as we wait for Christ to be born again in us this year. Amen.