From time to time, as I read an author’s work, my connection with the writer moves beyond the page to a more personal connection. They become my friend—an odd use of the word, I suppose, having never met them—because of the resonance I feel. Reading their books becomes a conversation of sorts. I can almost hear them reading to me, even though I have no idea what they actually sound like. Madeleine L’Engle is one, Frederick Buechner another, and now Marilynne Robinson

is quickly joining that circle. Here is the opening paragraph to her essay, “Wondrous Love.”

I have reached the point in my life when I can see what has mattered, what has become part of its substance—I might say a part of my substance. Some of the things are obvious, since they have been important to me in my career as a student and teacher. But some of them I could never have anticipated. The importance to me of elderly and old American hymns is certainly one example. They can move me so deeply that I have difficulty even speaking about them.

One of the things I miss most about our life in Durham is the monthly gathering at Fullsteam Brewery for Beer and Hymns. The man who leads the evening, Jesse DeConto, does a marvelous job of connecting old and new, memory and meaning, and we all sing our hearts out. One of the hymns we have sung there, and that Robinson mentions, is “In the Garden.” Until I got to seminary, I always thought of the song as rather saccharine until one day in Dr. Reynolds’ hymnody class he explained that the song was written from the perspective of Mary Magdalene coming to the tomb on Easter morning and meeting Jesus, first mistaking him as the gardener and not recognizing him until he called her name. Robinson speaks of the hymn with these words:

Jesus spoke as a man, in a human voice. And a human voice has a music that gives words their meaning. In that old hymn I mentioned, as in the Gospel, Mary is awakened out of her loneliness by the sound of her own name spoken in a voice “so sweet the birds hush their singing.” It is beautiful to think what the sound of one’s own name would be, when the inflection of it would carry the meaning. Mary heard in the unmistakable, familiar, and utterly unexpected voice of her friend and teacher. To propose analogies for the sound of it, a human name spoken in the world’s new morning, would be to trivialize it. I admire the tact of the lyric in making no attempt to evoke it, except obliquely in the hush that falls over the birds. But it is nevertheless the center of meaning of this story that we can know something of the inflection of that voice. Christ’s humanity speaks to our humanity. 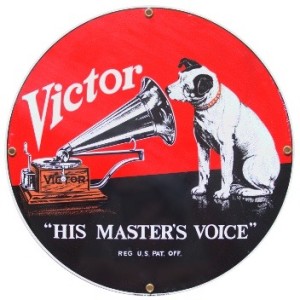 The sound of his voice. It evokes, for me, images of old RCA Victor records with the little dog staring at the amplifier, surrounded by the words, “his master’s voice.” And it ties in beautifully with a comment from my friend Terry—in Durham—in response to last night’s post on tone.

I think of music as I am reading this, Milton. One can learn, and needs to learn, scales, chord structure, harmony, etc., but when it comes down to it, timing and tone are what most express the emotional content, and thus most communicate the feel of a song. Stan Getz was called “The Sound” because of his warm, lyrical tone. I am inspired by your observations to think of Jesus more as “the sound” rather than “the word.”

During my years in Durham, Terry and I played and sang together. He is one of the best harmonica players I have ever heard; he, too, knows about tone and timing. We called ourselves, Oysters on the Half Shell: we’re raw and delicious. One of the songs I loved to do with him was a John Prine tune that says,

The song has always intrigued me because, though I cannot articulate how one might break the speed of the sound of loneliness, the words are deeply resonant because there’s something about the word, sound. The sound of loneliness is a cry in the night, a mournful song, or, perhaps, an expansive silence. You know it when you hear it.

Robinson has more to say:

I tell my students, language is music. Written words are musical notation. The music of a piece of fiction establishes the way in which it is to be read, and in the largest sense, what it means. It is essential to remember that characters have a music as well, a pitch and tempo, just as real people do. To make them believable, you must always be aware of what they would or would not say, where stresses would or would not fall.

One of the old hymns I keep coming back to is “Come, Thou Fount of Every Blessing“, and particularly the line that says, “Tune my heart to sing thy praise.” Tonight, I feel the tuning touch of my friends, those I know in the flesh, and those I know through words and music.

The Sound became flesh and dwelt among us. Within in us. Amen.