It was about this time three years ago when Ginger and I began making plans to move her parents here to Durham to live with us. Her father’s Alzheimer’s was progressing to the point that her mother couldn’t take care of him on her own and a nine hour drive was too far a distance for us to be of much help. We all became real estate moguls that spring, selling our house here and their house there and then buying one big enough for all of us. We found a wonderful old home just north of downtown. The house was built in 1926 and had been redone; the yard, however, had not.

We turned to our friends from Bountiful Backyards to help us turn the yard from garbage into garden. When they finished, we had three fig trees, two Asian pear trees, a peach tree, blueberry bushes, blackberry bushes, an elderberry bush, a pomegranate bush, and all kinds of other things that build a permaculture, along with two big beds for vegetables. And not a blade of grass in sight. Our little urban farm, if you will, has kept me on a learning curve of how to compost and fertilize and plant and harvest.

I’ve also had to learn how to prune — or, should I say, I’m learning.

My latest lesson came last week when Sarah and Kate came over to help give the garden its winter trim. I asked for help because my life was as overgrown as the backyard and I couldn’t catch up on my own. I also still cut back most anything with some trepidation because I’m not sure what goes and what stays. In my backyard, the wheat and the chaff are not so clearly labeled. We spent a couple of hours one crisp and sunny morning working our way around the yard.

They talked and pruned and I listened and asked questions. They were gentle and judicious in their cutting, paying attention to the shape of the tree, the direction of the growth, and the ability for all the branches to see the light. Each tree had its own pruning map, so to speak. The peach tree wants to take on a bowl shape, the branches growing out first and then up, like an open hand. The pear grows straight up, centered around one central branch that calls the others to follow. The fig tree grows every way it can, its size limited only by how much it’s cut back. The muscadine grape renders more fruit when cut back to one vine instead of many. As we worked, I took notes both mental and physical, and I couldn’t help but think in metaphor: I was being offered a visual picture of Lent. This is a pruning season.

At the risk of this post becoming “FIve Things I Learned in My Garden,” I want to mention a few things that I am taking as markers for these forty days, as guides for my thoughts and actions on the way to the Resurrection. I suppose the other risk is that I am stating the obvious. I’m willing to risk both as I begin my spiritual practice of writing everyday from now till Easter. The first is old growth has to be cut away for new growth to be possible. When they pruned the blackberry bushes, they told me the new growth that came from the cut would be what fruited. The old branches were spent. They weren’t making a statement of judgement; they were stating what they knew. What grew and fruited last year had to be cut away to make room for new growth.

I hear two things. One — some things in our lives need to be finished in order for new things to be able to begin. Attending to life in the same way Sarah and Kate attended to our garden means looking for what needs to go. Two — pruning is not clear cutting, or even random cutting. They were attentive. They discussed which branch had to be cut and where it had to be cut. Pruning in the wrong place would not produce new growth. How the new growth happens depends on where we cut.

The next thing is all growth is not necessarily good for the plant. Growth is not actually the point. Healthy fruiting is the point. Letting the plant grow into its fullness is the point of pruning. Therefore, good growth doesn’t always mean just getting bigger. Part of what Kate and Sarah took into account was how the different plants fit into the larger garden. Our biggest fig tree was significantly cut back because the peach tree close by needs the room and the sun.  The fig tree will grow and produce figs and will also stay smaller than it could because its best growth will be to let the peach tree come into its own.

One last lesson, at least for this time around: what grows now will need to be pruned in time. This year’s new growth will be old next winter and will need to provide nutrition for the new branches that will bear their fruit. As we grow and change, so do our roles in the world.

Wait. One last thing — how things grow is ultimately out of my control. I can only do what I can do. Last year I had trees full of peaches and pears and figs and the squirrels got every last piece. Until I saw the barren branches I didn’t realize the century-old pin oaks that line our alley were a squirrel highway and I had inadvertently built a Cracker Barrel. I pruned this year knowing that their traffic patterns haven’t changed. I’ve been told hanging empty aluminum pie pans from the trees will deter them. My neighbors have old CDs hanging in theirs. If the little bushy tailed varmints get all of the fruit this summer, we will prune and try again. 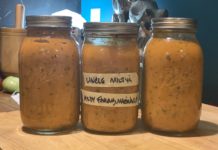 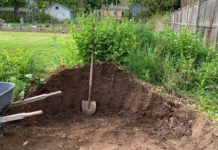 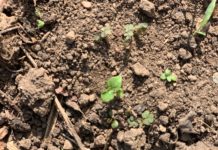