Since today marks the beginning of National Poetry Month, I have a statement to make: Jesus was a poet.

Why not? Vaclav Havel was a poet who became president of his country; why can’t a poet be Messiah? Jesus thrived on metaphor. His “I am” statements, as we’ve come to call them, are among his best: I am

The seven statements use everything from cooking to animal husbandry to describe who he was and why he stepped into our skins. Like a good poet, he did more provoking than explaining, offering metaphors that refused to be easily pinned down. Some have even expanded. Light, for instance, we know now is one of the few things than can be perceived as both a wave and a particle, but not at the same time. We draw light from an abundance of sources not available to Jesus’ hearers the first time around, leaving us to unpack the poetry in ways Jesus, perhaps, didn’t even think of during his time on earth.

In the extensive Bible study I did while driving from church to work this afternoon (which means I tried to remember every statement of Jesus I could), I couldn’t come up with a single instance where Jesus, when trying to communicate his person and mission, began a statement with “I am not . . .” He never described himself by reflecting – or deflecting – off of those he considered rivals or enemies. He had poetry to speak and to do, so negative, competitive, and judgmental words had no place in the equation. And he was standing in a lineage of poets.

When Moses asked God whom he should say sent him to Pharaoh, God answered, “Tell him, I AM sent you.” The verb TO BE. Isaiah talked about trees clapping their hands and the rivers singing because they grew tired of waiting for the human poets to catch on. The writer of Ecclesiastes had to be sitting in a coffee shop somewhere writing those words, with a small jazz combo (can you play jazz on lyre and timbrel?) sitting in the corner.

This weekend, the presidential candidates had to report how much money they’ve raised so far. They’ll spend a good deal of the money telling us why they aren’t like the other guys. But does that really tell us anything? The Democrats keep saying they’re not the Republicans, and the Republicans tell us they aren’t Democrats, but do those statements reveal any thing significant about who they are? The candidates who stand up and say, “This is who I am and here’s what I’m trying to do live mostly in TV dramas and rarely cross over (Fred Thompson notwithstanding).

I was in a Baptist seminary when the hostile takeover of the Southern Baptist Convention began. Those who masterminded the coup were clear about who they were. Those of us who were against them lost ground first because we could articulate little more than, “We’re not them.” How can you build any momentum and passion by yelling, “We’re not them! We’re not them!”? Many of us on the more moderate side of the Baptist continuum at the time could have articulated who we were as Baptists and who we hoped we were becoming. Instead, we got hooked into the power struggle and have the scars to prove it.

Poetry might get you elected president, but it’s more likely to get you killed. Jesus was crucified because of who he said he was. Had he been willing to speak the prose of competition and power, or if he’d been willing to allow those around him to tell him who to be, he might have lived longer. But for Jesus to say, “I am the way and the truth” was about as comfortable for the power brokers of his day as running their hands down the business side of cheese grater, because his poetic self-awareness told them who they were not. They squash you like a bug for stuff like that.

One quarter into my fifty-first year and I still feel like an apprentice poet trying to learn how to say, “I am . . .” authentically and intentionally. I’m far more to used to the language of subversive comparison, the barbed phrases of ambush: I’m not you; take that. When I talk about who I am, there is no violence in my words. There is hope. There is love. There is truth. 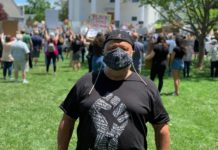