One of my dad’s favorite songs was “You Never Even Call Me By My Name,” which was written by John Prine and Steve Goodman and most famously recorded by David Allen Coe. I don’t know the story of how my dad came to find the song, much less love it, but during some of his early days in the hospital we would play the song on my mom’s phone and sing along:

you don’t have to call me darlin’, darlin’
you never even call me by my name.

Ginger preached on the story of Jacob on Sunday, and from Genesis 32 in particular where Jacob wrestles with God even as he tries to come to terms with facing his brother whom he had so egregiously wronged. Jacob, whose name meant “heel grabber,” referring to the way he followed his slightly older twin brother out of the womb, had built a life based on deception, power grabbing, and manipulation. He played on his brother’s hunger to extract the birthright for a bowl of oatmeal and then tricked his father into giving him the blessing due the same hungry brother. And, yet, it was not enough because he was still a heel grabber, still one chasing what was just out of his reach.

He fled his family at his mother’s bidding because she was afraid his brother Esau was angry enough to kill him, so Jacob ended up living with relatives, which is where he met Rachel and fell in love. Laban, Rachel’s father, saw a chance to make sure both of his daughters were taken care of and tricked Jacob into marrying both of them; the plot took fourteen years to play out, and then there were children.

By the time we find Jacob on the wrestling mat, he has left what had become home to find a new life and had sent word to Esau that he wanted to meet. After two decades of deception and distance, the dawn would bring them face to face. As night fell, Jacob came to terms with himself and his God, perhaps not in that order.

In the darkness of the desert, the story moves between actuality and poetry. All the story says is “a man” came and wrestled with Jacob, and yet it was not just an average passer-by. The wrestling was both physical and metaphorical — at the same time, and both were very real. That which is most essential to us also becomes our working metaphor for life. I love to cook, and coming to the table 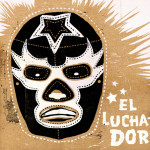 is a primary metaphor. I led a retreat last week for a gathering of music ministers who conduct choirs and for whom music is the metaphor. Jacob had been a trickster and deceiver his whole life, wrestling from others what was not his, and how he was flat on his back in the sand, fighting for his life.

As I listened to Ginger on Sunday, I smiled because the first thing that came to mind was God as a luchador. I pictured the stranger in the brightly colored mask, jumping down from the rocks and into the middle of Jacob’s struggle. Jacob kept up the best he could, but the stranger knocked his hip out of the socket, and Jacob ended up clinging for his life. All he could do was not let go. “Let me go,” the stranger said, “for daylight is coming.”

“Not until you bless me,” answered Jacob.

“What is your name?”

“You shall no longer be called Jacob, but Israel, for you have striven with God and with humans, and have prevailed.”

In faith circles, we talk about being called to mean, as Frederick Buechner says, to find the place where our deepest desire and the world’s deepest need intersect. We are called, we sing, to be God’s people. The relentless wrestler told Jacob he would be called Israel, that he would have a new name, a hew sense of being after their encounter. So Jacob gave the place a new name as well, saying “For I have seen God face to face, and yet my life is preserved.”

And then he limped off to meet his brother and ask for forgiveness.

One of the biggest struggles my father and I had centered around my name. When Ginger and I decided to get married, we also decided we would both take each other’s name: we would be called Brasher-Cunningham. My father struggled with my no longer being Milton Cunningham III. We wrestled back and forth, trying to find each other. One day I said, “Here’s the way I look at it. In the Bible, when someone has a significant encounter with God, they get a new name. That’s what I’m doing. Marrying Ginger is the best thing I can do with my life; this is a significant encounter with God and I am getting a new name.” He didn’t agree, but somehow he understood and began his own slow walk to understanding and acceptance of us and our calling to one another.

Jacob spent much of his life named by his circumstance, which led him to a life of manipulation and self-preservation. Perhaps, most all of us can find ourselves in him in one way or another. That night at Bethel, he was named — renamed — by Love, by Grace, By God. His history had not changed, but he limped into his future more informed and more compassionate, called to forgive and be forgiven.

I know that road as well.