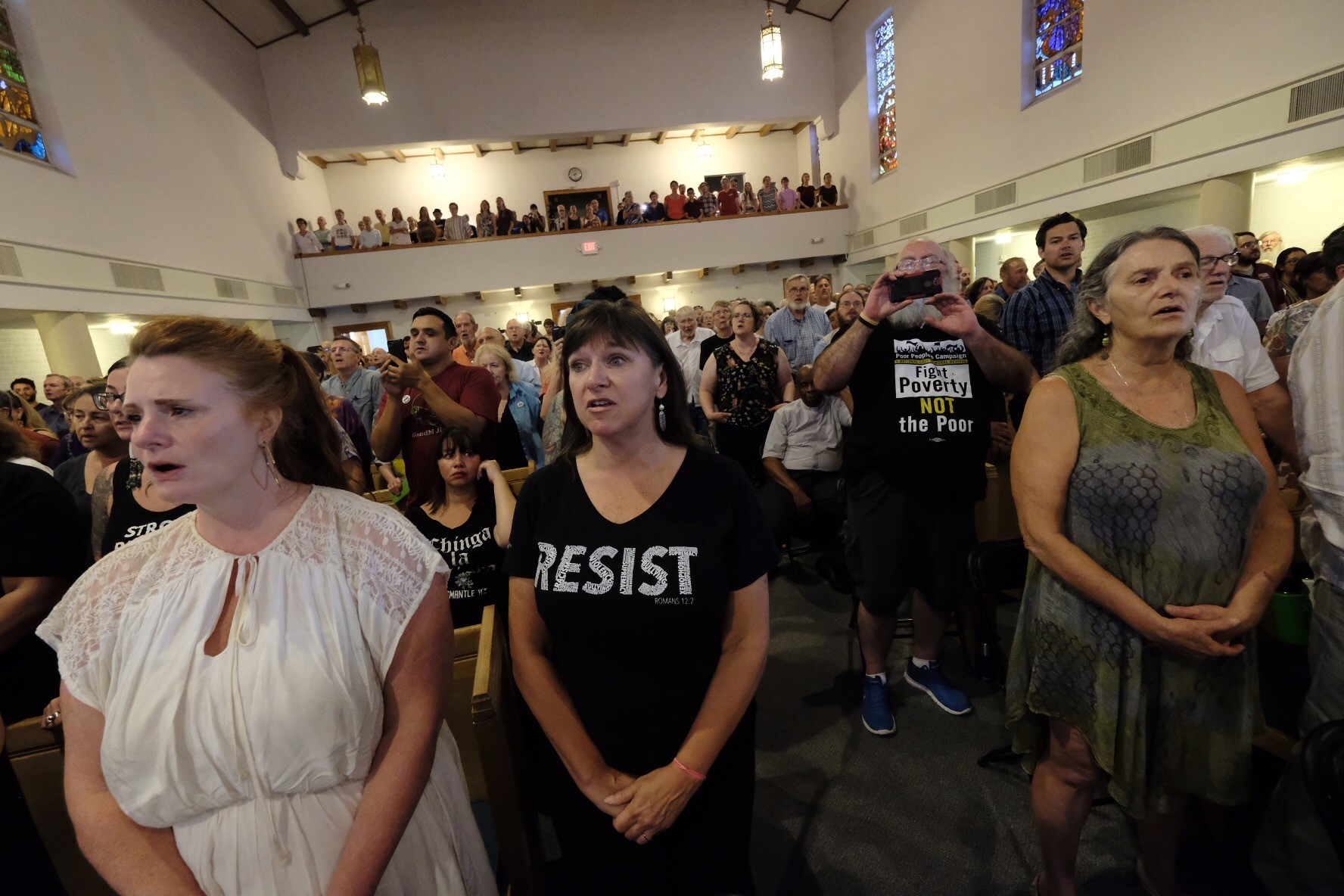 I’m preaching tomorrow at North Madison Congregational Church UCC, a wonderful congregation in the next town over from Guilford. In light of all that has gone on in the past couple of weeks, and also in light of Ginger’s trip to El Paso, I am using Isaiah 58:9-12 rather than the lectionary passage for the day. Since I am using an amalgam of different translations, I included the verses here.

My sermon title is “Repairers of the Breach.” The post title is how I wish I could begin my sermon.

If you remove the yoke of oppression from among you,
the finger-pointing, the mean and inflammatory speech;
If you open your heart to the hungry,
and provide abundantly for those who are afflicted,
your light will shine in your despair,
and your gloom will be like the noonday.
God will guide you continually
and provide for you, even in parched places,
and make your bones strong.
You will be like a watered garden,
like a spring of water that won’t run dry.
Your ancient ruins shall be rebuilt;
you shall raise up the foundations of many generations;
You will be called Repairers of the Breach,
Restorer of Livable Streets.

The last time I was here, I told you that Ginger, my wife, was on her way to El Paso, Texas to take part in a protest at one of the detention centers. She got back home last Wednesday night. On Saturday, we heard the news of the mass shooting there and it hit us a little closer to home. When we looked on the map we saw that her hotel was only a couple of block from the Walmart where people were killed as they shopped. She had walked past it in the evenings. She called the hotel to see if folks there were alright and the woman who had driven her shuttle bus answered. They were unharmed, but they were shaken.

The next morning came news of the shooting in Dayton. Barely a week before El Paso, there was a mass shooting in at a Garlic Festival in Gilroy, California. In all three cases, the terrorists who attacked and people had been exploring “violent ideologies,” according to news reports. Someone asked the man in California why he was doing it and he said, “Because I’m really angry.” The white man in El Paso was trying to kill Latinix people because he saw them as an “invasion”—words he learned from the partisan rhetoric around immigration—the kind of “mean and inflammatory speech” Isaiah condemned.

Once again, we are traumatized. We are left angry, confused, and scared. Even though mass shootings have long ago ceased to be unusual, it still feels like the world has shifted and requires a different response. Layer on to that the polarization of the political discussion on just about any issue, and it is hard to know both what to say and how to say it. If this room of people is like any other sanctuary on the Shoreline, we share a variety of opinions on the important issues of our time. We are not in unison in how we vote, or how we choose our candidates. Often, we are wary of speaking up because we are not sure how we will be either received and perceived.

So I am asking us to risk together this morning. I know the good New England way is to not talk about religion or politics, but avoiding a discussion—not a debate, a discussion—doesn’t give us a chance to build a true beloved community. The verses we read talk about being “the restorers of streets to live in.” How can we build community if we are not honest with each other? How can we come together if we cannot learn to talk about hard things? There is more to faith than worshipping together on Sunday—that is actually at the heart of today’s passage.

The verses we read from Isaiah pick up in the middle of the story. After generations of captivity in Babylon, the Hebrew people had returned to their land and were rebuilding their lives. They had lived in captivity for generations. They were traumatized. In the midst of all that had been lost and all they were trying to build, they had committed themselves to worshipping God—by observing a weekly fast—as a way to show they wanted to make Israel great again. The prophet showed up to tell them God was not impressed because on the days they were not fasting, they were overworking and underpaying their employees, they were arguing bitterly among themselves, and acting duplicitously in their relationships.

Isaiah then drew a different picture of what it looked like to be the people of God, which Carol Anne read. The verses start with conditions—

If you remove the yoke of oppression from among you,
the finger-pointing, the mean and inflammatory speech;
If you open your heart to the hungry,
and provide abundantly for those who are afflicted,
your light will shine in your despair,
and your gloom will be like the noonday.

The prophet was not saying God would only love them if they did what God said. Isaiah said their behavior would give God room to act among and through them. Their acts of justice and compassion would release God’s healing Spirit in the world.

God will guide you continually
and provide for you, even in parched places,
and make your bones strong.
You will be like a watered garden,
like a spring of water that won’t run dry.
Your ancient ruins shall be rebuilt;
you shall raise up the foundations of many generations;
You will be called Repairers of the Breach,
Restorer of Livable Streets.

Breach, in military terms, means a break in protection, as in, “the wall has been breached.” A is also “a break in relationship.”

Repair, as you know, means to fix or mend, to make good, to put right, to put back together.

To repair the breach, then is to restore the relationship. It means to do what we have to do to put things right, to mend what is broken, to create a place where everyone belongs.

When we talk about repairing the breach, the call to action seems obvious: we go to the border, we work to feed the hungry, to push for living wages, we work to make sure all children have access to good education, we work to build an economy that doesn’t allow a few to prosper on the backs of the poor, we work to come to terms with our privilege, and we pledge ourselves to do what we need to do to dismantle racism and discrimination on all fronts.

Yes. All of those things. Yes.

And there is another breach to talk about, another healing that needs to take place that is more difficult. We have to figure out how to repair the breach between us and our siblings who feel angry and displaced and who act out that anger in ways that terrorize and discriminate against those whom they see as not like them.

During the last campaign, one of the labels aimed at an opposing group was that they were a “bag of deplorables.” I wish I could say that was the only insult thrown around during the campaign, but it was not. I mention it here because it came to mind as another example of the “mean and inflammatory speech” Isaiah told the Hebrews to stop.

We need to stop it too, whatever the discussion. Ginger quotes one of her former pastors who said, “Actions speak louder than words, but words speak more clearly.” Words that characterize people as “invasive” or deplorable” entice us to divide our nation into “us” and “them,” so that we can more easily dismiss or discard people because they are not like us. That kind of approach doesn’t heal anything; it does damage—to everyone.

This week, in response to the mass shootings in El Paso and Dayton, Representative Alexandria Ocasio-Cortez offered another approach:

“Here’s what we have to say to all of America’s men and women falling in the grips of hatred and white supremacy: Come back. It’s not too late. You have neighbors and loved ones waiting, holding space for you. And we will love you back.”

Her words challenge me because she chose to offer an invitation, rather than a condemnation. Her words convict me, to use a good Baptist word, of my sin of dividing people into us and them—which is another way of saying who I think is worth listening to. It is far easier for me to think of the refugees and migrants at the border as part of my community than it is to work to feel connected those who foment hate, or those who are so driven by fear that they lash out at people not like themselves. I want to write them off, but that is no way to repair the breach. I only make the divide deeper. We are called to repair the breach—to rebuild the relationship—whatever that breach is.

When people ask me about the United Church of Christ, I have a little spiel in response. I say we ordained the first African-American man to pastor a white congregation before the Civil War; we began ordaining women sixty years before they could vote; and we ordained the first openly gay man in 1970, when the American Psychiatric Association still listed homosexuality as mental illness. That is a rich an important heritage, after which we should probably repeat again, “Walk humbly with our God.”

My other repeatable statement about the UCC is that if Christianity were a neighborhood, we’d be the last house on the left. Maybe that’s where it starts—in our neighborhoods, both literally and metaphorically. Who do we know on your street, or in our neighborhood, or in our town stands on the other side of breach? What can we do to make our street livable for all of us? How can we incarnate the love of Christ in a way that brings healing? What questions can we ask? What word can we offer?

These are questions we can ask about our relationships, whether it is someone who may be undocumented, or someone in a service job that feels invisible, or someone who is so beaten down by the circumstances of life that they are lashing out, or someone so unaware of their privilege that they do unintentional harm. Whoever they are, they are us. There is no them. Whatever the breach, we are called to repair it. Amen.