I have a confession: I have never read Dante’s Inferno.

I have read plenty of books and articles that use it as a reference or symbol, but I have never slogged through it. Yes, I know it’s great literature. Part of it is, I suppose, I never cared about hell that much. I mention it tonight because David Whyte carries on a book-long conversation with Dante in The Heart Aroused: Poetry and the Preservation of the Soul in Corporate America.

Whyte describes how the poet Virgil stands before Dante and “does not raise his finger and lecture Dante in any way. He shows him the gate to hell and the words written above, LAY DOWN ALL HOPE, YOU THAT GO IN BY ME.”

“Abandon all hope, ye who enter here” is the translation I remember from some class somewhere.

The hope that Dante is asked to lay down is the hope for immunity. Immunity from his own shadows and from the greater life glinting and winking at him from every direction. Through this gate he will experience all the parts of himself he feels are inferior to his needs and all the newborn lives he has smothered before they could disturb his stable delusions. In short, the most fearful parts of ourselves that we as human beings hide but must eventually confront.

The roots of the word immunity literally mean “not paying a share.” At its root, immunity is another word for privilege. To be immune is to be unburdened, untaxed. It only came to mean exempt from disease when vaccinations began about 150 years ago. We are still learning we are not immune from everything.

HBO was free this weekend so last night Ginger and I watched the first couple of episodes of The Newsroom, which was written by Aaron Sorkin. In the opening scene, Jeff Daniel’s character, a national news anchor, goes on quite a rant about why “America is not the greatest country in the world, but it used to be.” The show aired in 2010. His examples sound as though it premiered last night.

Our stable delusion as a nation is that “We’re Number One!”

No one else is keeping score. No other country feels the need to chant that over and over or remind everyone else whenever they have the chance. Our sense of manifest destiny gave us the stable delusion that we were God’s new chosen people, a City on a Hill, and we took that to mean we had permission to run across the continent grabbing land and killing anyone who got in our way and some who didn’t. It gave us permission not only to drag people across the ocean and enslave them. Our stable delusion for much of our history has been not just that we are Number One, but that we are the Ones Who Matter Most.

As we deal with the reality that we are not immune to Corvid 19, we are going to watch another stable national delusion play out again, which is that rich people are what keep this country going. I won’t claim to be an economist, but I did understand that the Federal Reserve spent $1.5 TRILLION dollars buying bonds to try and keep the investment market from crashing further. I may not understand all the ins and outs of the stock market, but I do know that whatever value my 401 K lost this past month has not taken anything out of my bank account. I also know that those in service industries–restaurants, bars, hotels–whose jobs dried up because of the physical distancing that no longer allows people to gather in those places didn’t lose stock value, they lost their salaries. They lost real money.

Regardless of ranking, those who this country great are not those playing the stock market and leveraging debt. They live in a stable delusion of immunity. The people who do the daily work of cooking and cleaning, of sweeping and selling, of teaching and caring and building, of rescuing and healing are the ones who understand what it means to abandon hope. They know that no one on the Federal Reserve or in any conference room in the White House or on Capitol Hill stood up in a meeting and said, “Forget the bonds. Let’s take that $1.5 trillion and pay the salaries of all of those who cannot work.”

And yet, they keep showing up and doing the work.

Whyte’s words sent me back to Miguel De La Terra:

To be hopeless is a desperation refusing to give up, a recognition that even if carrying the cross leads to crucifixion, the struggle for justice is what defines the present and could plant seeds that might blossom in some future. Fruit might someday be borne but that is inconsequential for those suffering now. And while there is nothing redemptive in the present suffering, nevertheless, it makes a refusal of complicity with the inhumanity undergirding oppression.

I said last night that I don’t think things will be the same after we live through this. I would love to see it be profoundly different. As much as I love baseball and watching my Red Sox, it would be amazing if pro sports had to restructure so that players didn’t make $12 million a year chasing a ball or a puck and fans didn’t have to skip a mortgage payment to go to a game. I can imagine Jeff Bezos and Tim Cook and Oprah Winfrey saying they had decided they could live on $1 million a year and then sharing their money with their employees. I can imagine Congress passing legislation for guaranteed health care for all Americans.

I have no hope that any of that will happen.

I am a Holy Saturday preacher. I wake in the aftermath–if I have slept–to the knowledge that the Beloved is still dead. And I take comfort in the God who is and has said I AM with you. And I rail and scream and curse at God knowing God hears and is there with me to hear. And I try to sleep one more night to see if it will be easier the next day.

And that is where the sermon ends. It is still too soon to talk about resurrection. But God-with-us sits in her chair grieving with us. Waiting with us, walking with us as we make our way through and make sense of our grief.

The way it looks now, none of us will be gathered together physically to mark Easter Sunday. Perhaps this is a good year to be Holy Saturday people–those who have abandoned the stable delusion that everything will work out and who are committed to the work of taking care of one another. Every last one another.

We don’t have to go to hell to abandon hope. We can forfeit the fantasy of our immunity–our privilege–in these days and create a contagion of justice. 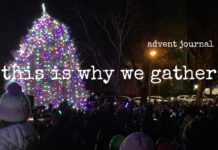 advent journal: this is why we gather