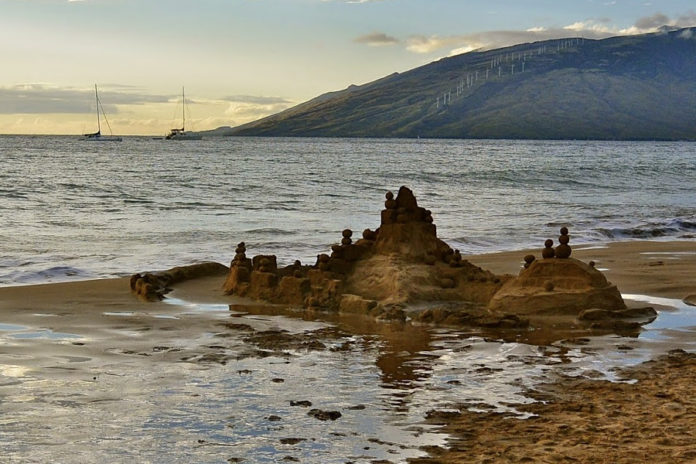 Part of my Sunday morning ritual is to pour a cup of coffee and watch CBS Sunday Morning until it’s time to go to church. I’ve watched the show on and off since the days of Charles Kuralt. It is just the right mix of calm and questions. Not a bad prelude for worship.

This week, one of the segments was on the final art installation of Cristo, who was known for his gigantic displays–wrapping buildings or taking over places like Central Park–all over the world. None of his works were on display for more than two or three weeks. He paid for them himself so he could retain control. Jean Claude, his wife, was his collaborator until her death in 2009. He died in 2020 with a project to wrap the Arc de Triomphe in fabric underway, so his associates completed the project.

One of the things they discussed in the segment was the consistent critique of his work over the years was that it wasn’t truly art because it was temporary. What it brought to mind was the one trip Ginger and I made to Paris in the spring of 1991. We went into Notre Dame and attached ourselves to a tour group that was standing in front of one of the rose windows as the guide explained that it was the “new” window that had been installed in the 1500s. Since then, the cathedral burned. It is not only the fabric wrapping the Arc that is temporary.

One of the folks I look for when I get to church is Julie. She is a poet and an actor. I told her about what I had seen and how it felt and she said one of her former directors used to say, “We’re all just building sand castles.” Her comment sent me searching for a sculptor I learned of years ago that built fantastic pieces out of driftwood, but he built them where the water would gradually dismantle them as the tide came in. I couldn’t find him again, but I did find Andres Amador, a sand artist who uses a rake to create intricate geometric patterns on the beach at low tide expecting they will get washed away.

Temporary and significant are not mutually exclusive.

Texas songwriter Sam Baker wrote a song called “Waves” that paints a picture of love and grief. I couldn’t help but hear the song as I watched the tide roll in over Amador’s artwork.

so many years so many hardships
so many laughs so many tears
so many things to remember
‘cause they had fifty years
​
and now the kids have got their own kids
and their own kids, they are grown
she told him not to worry
said he’d be fine when she was gone
​
he walks down to the ocean
bends to touch the water
Kneels to pray
he writes her name
in the sand
waves wash it away

Denise Ackermann says that we must remember that we are a body rather than we have a body, which says to me that embodied faith is a temporary work of art, a masterpiece in the making. It’s what made Mr. Keating tell the boys to seize the day: we will not be here forever.

Jason Isbell’s song “If We Were Vampires” does as good a job as anyone driving that point home.

I have often said that one of the things I loved about cooking is that I get to create temporary art that drew people to the table and asked them to stay. I work hard on my plates so that they look and taste good, but they are an artistic invitation to stay at the table and create a performance of togetherness. And then we go on to whatever comes next carrying the memory knowing that it mattered that we were there on that night for that meal.

One of the persistent lessons of the pandemic is that nothing is as permanent as any of us imagined. I don’t know of any of our institutions, those things in our lives most focused on self-perpetuation, that have been not been shaken. The sustaining forces are not housed in those places. Where I find the tenacity that offers me hope is in the temporary art that I call family and friends, those who keep showing up and reaching out even though none of us knows how long our exhibit will run.

Then again, that is not really a lesson unique to the pandemic. That’s been the story all along. We’ve always been building sandcastles.

My, aren’t they beautiful.