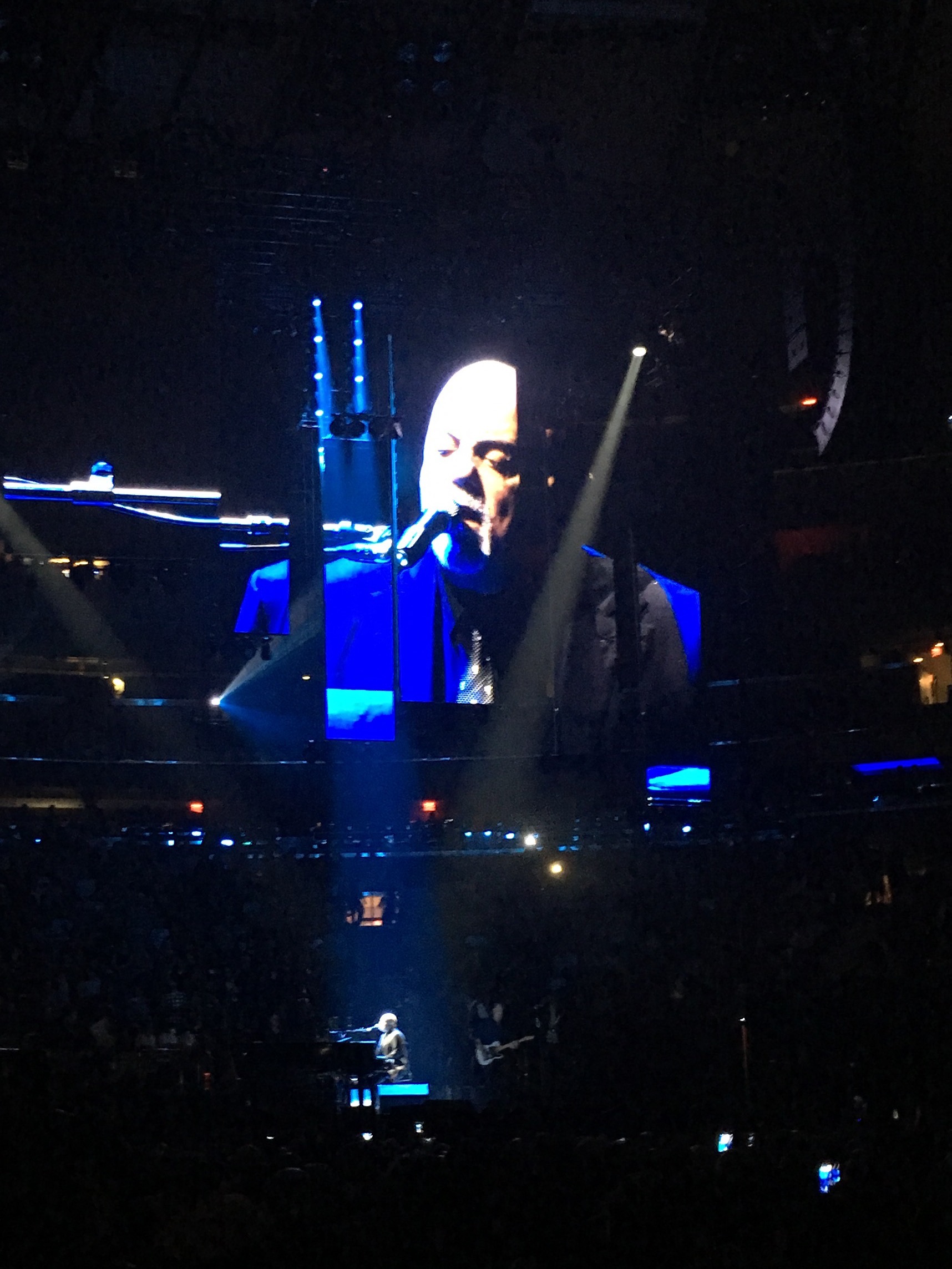 I know. It’s still the first week of Advent and I have already missed a day writing. I have a good reason: I went to see Billy Joel at his monthly concert in Madison Square Garden. Last night was his thirty-fifth show, and my first in the Garden.

Last Christmas, Ginger and our friend Jay gave me tickets—for a show on January 7, 2016. Later that afternoon, my mother called to say she was going in the hospital and my brother and sister-in-law were on their way to help. I got there at the first of the year, as she was going into hospice. Needless to say, we didn’t make the concert. She died on January 15, three days after her eighty-fourth birthday.

Jay was able to return the tickets and bank the money with the ticket agency and I started looking at a time to reschedule. Last night we finally made it. He sang for nearly three hours and I sang most of it right along with him—me and 18,000 of my closest friends.

The last song he sang before his encore was piano man. We could see it coming when he strapped on the harmonica holder. As he came to the last chorus, the house lights came up so we could all see ourselves, Billy stopped singing and let us take the vocals:

sing us a song, you’re the piano man
sing us a song tonight
‘cause we’re all in the mood for a melody
and you’ve got us feeling alright . . .

He picked up the closing piano part, we all cheered, and couldn’t help but wonder what it felt like to realize a song he wrote almost forty-five years ago had brought him to that particular moment: a moment he was built for.

Annie Dillard wasn’t at the concert, but she’s been talking particulars as I have been reading Pilgrim at Tinker Creek this week. I mentioned her “tree with the lights in it” a couple of days ago; she also described an encounter with a puppy that pulled her into the present tense. And then she said,

I had thought, because I had seen the tree with the lights in it, that the great door, by definition, opens on eternity. Now that I have “patted the puppy”—now that I have experienced the present through my senses—I discover that, although the door to the tree with lights in it was opened from eternity, as it were, and shone on that tree eternal lights, it nevertheless opened on the real and present cedar. It opened on time: Where else? That Christ’s incarnation occurred improbably, ridiculously, at such-and-such a time, into such-and-such a place, is referred to—with great sincerity among believers—as “the scandal of particularity.” Well, the “scandal of particularity” is the only world that I, in particular, know. What use has eternity for light? We’re all up to our necks in this particular scandal. (80)

One of the reasons I love live music or theater or pretty much anything is it matters that you are there in the moment. Stuff happens that isn’t recorded or ever duplicated. If you wanted to experience it, you had to be in that particular place at that particular time. Like last night when, in the middle of “In the Middle of the Night” Billy and the band broke into a cover of “Take it Easy” and sang the whole song. Just for fun. And I was in that particular room on that particular night to see it.

I have been at concerts where I was moved by an artist’s performance, only to buy the record later and find I didn’t really like the music. There was just something about being in the room, being in the moment—that particular moment. The reason stories carry truth better than statements is because they are about a particular someone in a particular place, whether it’s Scout, or Holden Caulfield, or Stephen Kumalo, or Daisy Buchanan, or Mary figuring out how to give birth in a barn.

When you start with the specific, you have a beautiful doorway to the universal. On the other hand, when you start with universal theories, it makes it very hard to ever get back to respect for the particular. In fact, you tend to find a reason to see that the particular is never good enough. It is always flawed and imperfect. There is inevitably a reason why this particular person or thing cannot be included, because it is seen to be abnormal, poor, broken, leprous, sinful, or unorthodox. Look at our Christian history: it seems to have been a nonstop search for who is unworthy and who does not belong. What a horrible waste of energy.

The particular pulls us into the present and pulls us towards one another. As Rohr says, we do damage to one another when we deal in labels and concepts, when we think truth lives in the propositional rather than the personal. Look at Genesis: creation moves from the swirling universe, focusing closer and closer, getting more and more particular, until everyone and everything is named. At the end of his all-wrestling match, Jacob grabs the stranger and says, “Tell me your name.” Make it particular. Then he wouldn’t let go until he got a blessing; and he walked home with a limp.

Listen to Billy Joel and you hear how the particular creates a place for everyone:
Anthony works in a grocery store, saving his pennies for Sunday . . .
Brenda and Eddie were still going steady in the summer of ’75 . . .
Come on, Virginia, don’t make me wait . . .
I’ve seen the lights go out on Broadway . . .
I’m in a New York state of mind . . .
It’s nine o”clock on a Saturday, the regular crowd shuffles in. . . .

As I try to listen for any hopeful sounds in the blasting white noise that passes for public discourse these days, I am reminded that the voice of God, and the voices that sing harmony with the divine, don’t need megaphones or manipulation. As I write, the image that comes to mind is just after the giant angel chorus has excelsis deo’d the shepherds to the manger and the sky is a little less crowed and a bit more starlit, but a couple of voices remain to sing in the background:

P.S. I found a recording from last month’s concert at the Garden. Here is “Piano Man.”