Last night, the Red Sox lost their last home game of the season. We have six away games left — three with the Orioles and then three with the Yankees — and then our season will be over. We will finish with a losing record for the first time in fifteen years. If Toronto continues to oblige, we may be able to avoid finishing last.

The lectionary passage from last Sunday seems well chosen for the end of the baseball season:

And they came to Capernaum. And when he was in the house he asked them, “What were you discussing on the way?” But they kept silent, for on the way they had argued with one another about who was the greatest. And he sat down and called the twelve. And he said to them, “If anyone would be first, he must be last of all and servant of all.”

In seasons such as this, I wish it worked that way in baseball. Between the Red Sox descent, the rise of ridiculous rhetoric in the election cycle, and my continued thoughts about our time in Tuscany, the passage has hung with me. What I quoted here was only a segment of the passage (Mark (:30-37) that began with Jesus making a prediction about his death. Mark’s economic prose doesn’t make it clear if the discussion of the pecking order grew out of that prediction, or if the struggle over superiority had kept them from hearing anything he had said to that point. Either way, they missed said point because they were so taken with themselves. Jesus moves them to the back of the metaphorical bus and then picks up a kid (I suppose one was nearby) and said, “Whoever receives one such child in my name receives me, and whoever receives me, receives not me but him who sent me,” as though that cleared everything up.

You have to wonder what the kid thought about it all.

Though his admonition to servanthood is what is most often pulled from this passage, I’m intrigued by the verb in the last sentence: receive. Whoever receives a child in my name, receives me. It’s not about importance; it’s about hospitality. Who wants to come to dinner where the hosts begins by saying, “I brought you all here tonight to remind you I matter most.” But to be received — welcomed, included, brought in. Now we’re on to something.

And notice the verb that doesn’t show up in the sentence: deserve.

Some years ago, my friend Billy and I wrote a song called “The Last in Line.” The first verse said,

In our election climate, every candidate at every level, it seems, is required to pay homage to the fact that we are the greatest country in the history of the world. We’re Number One. U-S-A. U-S-A. I wonder who we are trying to convince, or why we feel compelled to make the point every chance we get? We are much like the disciples on the road with Jesus: too caught up in ourselves to hear the rest of the conversation.

The central part of the town of Lucca, where we were in Tuscany, is a medieval city still surrounded by the old city walls. As we drove one day, I saw ruins of an old aqueduct. The people of Italy live out their lives on top of and among the ruins of greatness and seem quite content to be an also-ran, if you will. Yes, they have their problems. But they didn’t seem to be keeping score. I was there for ten days, so I won’t claim to have a handle on the Italian cultural psyche. Maybe I’d do better to say I understood life differently among the ruins. No one stays Number One forever. Five falls ago, the Red Sox were World Series champions. And so it goes . . . .

Ther sports metaphor falls short, however, when Jesus starts talking about receiving the child (though I suppose I could switch to football . . .) because hospitality is not about what anyone deserves or has accomplished. Jesus brought the little one into the circle and said, “Receive her and you’ll see God with new eyes.” And we will see ourselves differently, too.We spend most of our American conversation around who deserves what or who is getting what they don’t deserve, or why I deserve to keep what’s mine and perhaps take some of what’s yours since you don’t deserve it as much. We get upset when other countries seem weary of our self-promotion. Perhaps we would do well to notice we are almost the only ones who feel compelled to keep proving we’re Number One. Or maybe simply come to terms with the truth that it just doesn’t matter.

What matters is how we welcomed one another, fed one another, included one another. Loved. One. Another. In her sermon Sunday, Ginger reminded us that such an approach to life and faith gets “messy and smelly.” Yes. When we move beyond the dichotomy of winner and losers and begin to receive one another, life gets smelly and messy and requires us to think about most every encounter, rather than lean on categories and cliches.

As Mark recounted beyond the lectionary passage, the disciples responded with a “yes, but,” asking about the other guy in town who was casting out demons. Jesus told them to receive him as well. Start with what brings us together. Start there. Now stay and receive whomever we can find. Doesn’t roll off the tongue quite as easily as “We’re Number One,” which is fine. 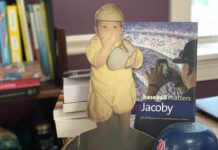