On the cusp of the passing of an unfair and unjust tax bill, and a couple of days after the fifth anniversary of the tragedy at Sandy Hook Elementary school, and on the morning that a suicide bomber killed twelve other people at a church in Pakistan, and in the light of what feels like an endless string of suffering, how do we find the flame to light the candle of joy?

Ginger did it this morning by talking about Mary. Every time I hear the story, I am struck by the grit of the young woman as she encounters the angel and stares down both his presence and his proclamation, even as she tries to comes to grips with being “a most favored one.” She listens hard, asks good questions, and then says, “Let it be just as you say.”

Despite the fact that the dictionary treats joy as a synonym for happiness, Mary’s response demonstrates something more profound and and more informed that feeling happy. Joy has resolve and tenacity. Joy is courageous in the way Ginger defined it in her sermon: “Courage is believing something else is more important than fear.” Yes. Most every time an angel shows up in scripture, they lead with, “Do not be afraid.” I used to think they were simply trying to help whomever they were talking to deal with the fact that there was an angel in the room, but perhaps it was a larger challenge: don’t be afraid; be joyful. Learn what is more important than fear.

Ginger summed up Gabriel’s message to Mary in three phrases: God is proud of you; God believes in you, and you have God’s blessing. Then she asked what it would be like if we could all hear that message and take it to heart—and she had us practice. We turned to each other and said, “I’m proud of you, I believe in you, and you have my blessing.” For someone who inherited a legacy of feeling unworthy of love and who has worked hard to hear other voices, her words hit home for me. I found joy in both hearing the words and saying them to those around me. Joy is grounded in our belonging to God and to one another. Joy takes root and grows when we stand together.

Pierce Pettis has a song I have carried in my heart for many years called “God Believes In You.” The bridge says,

And God is proud of you. You have God’s blessing. Let it be just as I said. 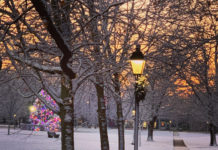 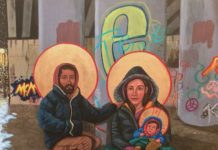