At certain intersections of my life I have been aware of a clear memory of my father at my age. When I turned forty-one, I could 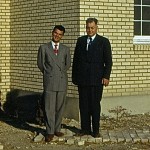 remember Dad at that age because of one the persistent fragments of memory was the birthday card I wrote for him that year:

at least that’s what they say

so look on the bright side of things

Yes, I’ve always been a poet. Tomorrow I turn fifty-seven and this memory of my father is perhaps clearest of all because of what that birthday meant to him: his father died at fifty-seven as the longest living Cunningham male to date. All of them had died young and died of heart attacks. Dad could hear the bell tolling. That fall he drove up to Fort Worth by himself to visit me, which was not a regular occurrence. He traveled to places that mattered to him and to see people he loved as though he was on a farewell tour. Fifty-seven came and went, as did fifty-eight and sixty; he died a little over a month shy of his eighty-fifth birthday. I am grateful on many levels.

That all the Cunningham males died so early meant I never knew any of my relatives beyond the generation that preceded me. My dad’s mother, Bertha, died a month after he was born; my grandfather (Milton I) died two years before I arrived. To this day I don’t know where either of them is buried. My dad had some great almost Paul Bunyanesque stories about his father, but even he knew little about his mother. When my folks moved from their house in Waco into an apartment, Ginger and I became the recipients of dishes and glasses, which now grace our table as often as possible, which feeds me in ways I had not expected. I try to imagine what it must have been like for my grandfather at my age, eating off dishes meant to be shared with his wife who had been gone for years and years and years. He did remarry. Marie, the woman I knew as “Grandma C” was a good woman who managed to live to be one hundred, but, as the stories go, they struggled in their lives together. Yet she is the one who saved everything of Bertha’s to pass down. Her fingerprints are on the glasses and plates as well. Family is often a difficult recipe to describe.

If my dad were still here, he would call me today and say, “Well, this is the last day in your fifty-seventh year,” making sure to remind me the birthday number marked the end of a year rather than the beginning. Then he would ask, “How does it feel to start your fifty-eighth year?” as a way of sending me off on a new adventure. His Fifty-Seven Farewell Tour not withstanding, he never seems to fear growing old; I think he just saw it as growing. Over the past several years, we had a recurring conversation where he would tell me he was going somewhere as an interim pastor and he would say, “I think this may be the last time I do this. I’m getting old.” Before too long, he would be telling me of his next church. He preached up until the Sunday before he had his stroke.

If it weren’t for my family history, Fifty-Seven would come and go as one of those birthdays that matter most as markers but don’t call for the kind of notice that the ones that end in fives and zeros demand. It’s a Rest Stop Birthday: relax, enjoy, keep going. Though my father is not here to see my turn fifty-seven, I’m grateful that he took the sting out it by living as long as he did. It is no longer a wall to be climbed, but simply a day to mark and, as I said, keep moving. I’m also grateful I like feel I’m on the cusp of new things and not making the club house turn. I’m grateful. More than ever.

for the harvests of the spirit, thanks be to God

for the good we all inherit, thanks be to God

for the wonders that astound us

for the truth that still confounds us

most of all, that love has found us

thanks be to God