For about twenty-five Advent seasons, I opened the services at our church (whichever church that was) with “Prepare Ye the Way of the Lord” from Godspell. That tradition didn’t make the move to Guilford, but the song is tattooed on my heart. The scripture passage for my sermon today alludes to Isaiah’s words, and it connected me with my youth in Kenya. (And yes, the video of the song is at the end of the sermon.)

As I told you last week, I grew up in Africa. Part of that time, I lived in Nairobi, Kenya. I think about living there often, for different reasons. This week my memories were sparked by Luke quoting Isaiah’s words about mountains being leveled and valleys being filled in because one of the great geological sights in Kenya is the Great Rift Valley. Actually, it runs from the Red Sea down into Malawi.

The sides of the valley are steep because it was caused by a fault, so it looks like the whole middle section just dropped hundreds of feet. As I read more about it, I learned the term Great Rift Valley is used to refer to a series of contiguous rifts that connect from Lebanon to Mozambique, one of which includes the Jordan River, which means the valley I saw in Africa was connected to the valley where Isaiah and John the Baptist both stood.

In the fifteenth year of Tiberius Caesar, Pontius Pilate was governor of Judea, Herod tetrarch of Galilee, Philip his brother tetrarch of the region of Ituraea and Trachonitis, and Lysanias tetrarch of Abilene. In those days, during the high-priesthood of Annas and Caiaphas, the Word of God came to John, ben-Zechariah, in the desert. John went through the entire region of the Jordan proclaiming a baptism of repentance for the forgiveness of sins, as is written in the words of Isaiah, the prophet:

“A herald’s voice in the desert, crying,
‘Make ready the way of our God;
clear a straight path.
Every valley will be filled,
and every mountain and hill will be leveled.
The twisted paths will be made straight,
and the rough road smooth—
and all humankind will see the salvation of God.’”

We read this passage during Advent because it talks about John the Baptist preparing the way for Jesus. If you know the musical Godspell, you know the musical opens with John the Baptist singing, “Prepare ye the way of the Lord.” For many years in the churches where my wife served, I sang that song to open our Advent services. But John never says or sings that. In fact, if we look closely at the passage, all Luke says about John is that he was preaching a gospel of repentance and forgiveness. The rest of the verses talk about who was in power at the time and then he quotes Isaiah—well, sort of quotes him.

I spent some time thinking about road work this week and then it struck me that Luke starts off by listing all the people in power, both politically and religiously and ends up focusing on a prophet ranting in the wilderness–a voice on the margins calling people to repentance and forgiveness. He says that John’s presence reminded people of a passage from Isaiah that people were used to hearing at the synagogue.

If we go back to the Hebrew Bible, Isaiah calls people to make a highway for God. The image is one of serious road construction, which often means the topography has to be changed to make the road viable. 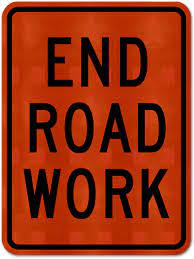 caused by highway construction. When we saw the “End Road Work” sign that set us free I remarked, “I think that ought to be a protest sign.”

We all want better highways and bridges, but if you have ever been stuck on I-95 because they are working on it, you know that any improvements in our infrastructure will come at a cost. Building and rebuilding are time consuming and inconvenient. Often to build means first something has to be torn down or torn out to prepare for what is to come, and then, as I said, it takes time to build the new thing.

The visual Isaiah created makes it sound like the world God wants looks a lot like West Texas, which is not appealing to me. West Texas looks like land that inspired people to build things like tables and countertops. It is flat and flat and endless and flat. The stars at night look big and bright because there is nothing else to see. Can you tell it’s not my favorite place.

But Luke isn’t just quoting Isaiah, he is paraphrasing him. Where the ancient prophet talked about a highway, Luke talked about a path when he said John was embodying Isaiah’s words. But I don’t think Luke intended for his readers to get caught up in trying to picture the epic landscaping project Isaiah proclaims. John wasn’t quoting Isaiah either. Isaiah is mentioned because Luke wanted us to get a picture of what it felt like when people living in Palestine under the mountain of oppression brought on by the names listed wandered to the outskirts of town and found John the Baptist in all his strangeness.

Luke says, when they saw John they thought, “Hey, this is like that verse about a voice crying in the wilderness.” They heard the passage often in the synagogue, but they had not imagined the live action version of it–except John wasn’t saying anything about mountains or valleys. He was preaching was repentance and forgiveness. If what prophets were supposed to talk about was the mountains coming down and the valleys being filled in, John was calling people to do it with a shovel, not large earth moving equipment.

Hold that thought and let’s go back to the Great Rift Valley because sometimes words build bridges that help us get from one place to another. As I was reading about it, I came across this sentence:

“While the name continues in some usages, it is rarely used in geology as it is considered an imprecise merging of separate though related rift and fault systems.”

Rifts and faults—words we use to talk about broken relationships. And the brought me back to the one sentence Luke says about John:

John went through the entire region of the Jordan proclaiming a baptism of repentance for the forgiveness of sins . . .

In a world where those in power used their privilege to oppress others, in a world where prophets had been crying out for centuries for people to trust that God could change the landscape if they would listen, in a world where people were just trying to figure out how to get through a day, John wandered the country preaching about repentance and forgiveness.

The word we translate as repentance has a stronger meaning, more along the lines of conversion–a turning, a new direction. It is deeper than changing our minds or feeling regret over something we have done. It is choosing to go in a new direction, to do things differently, to tear down what is there and build something new.

The Greek word we translate as forgiveness can also mean being freed from bondage, which is interesting to me when I think about the power of both asking for and offering forgiveness.

Both words call us to profound change. Perhaps knocking down a mountain is not a bad metaphor, and it’s an even better when we are willing to consider the rifts and faults in our own hearts. We can profoundly alter the landscape of our lives if we are willing to risk repentance and forgiveness. The straightest path from one heart to another, from one person to another, is the most direct one.

Isaiah had been dead a long time when John showed up. His transformative words had become familiar things that you heard in synagogue. John the Baptist has been dead a long time, too, and we mostly think about him during Advent as we talk about preparing for the birth of Jesus. Their words, however, are more than decorations. They show us how to love one another.

Prepare the way of the Lord. John may not have ever said those words, but it is exactly what he called us to do. Amen.